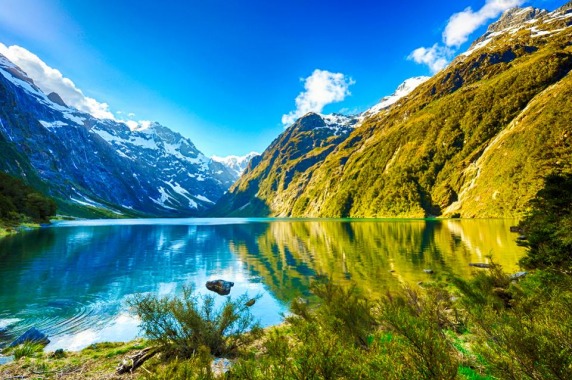 New Zealand is a very safe country. The risk of getting into serious trouble is minimal. Keep your usual vigilance and common sense to avoid any problems.

Public transport in New Zealand is well-developed and quite safe to travel. Also, in the country, there are many taxi services that you can freely use. Beware of pickpockets in crowded buses and watch your belongings.

There are not many pickpockets, but as in any popular tourist place, scammers are here too. Their goal is gape tourists who have forgotten about their things. Therefore, always look after your bags and backpacks, do not shine with a lot of cash, and watch your surroundings.

Kidnappings and armed attacks in New Zealand are rare. Travelers are free to move around the country at any time of the day or night. Maintain common sense and be more careful in big cities.

The risk of terrorism in New Zealand is minimal. However, it should not be excluded. Do not participate in political and other demonstrations, avoid crowded places.

Lottery ticket fraud is common in New Zealand, as well as email and telephone fraud. Usually, criminals try in such ways to get information about your cards and passport data. Be careful and never share your personal information with third parties or strangers.

New Zealand is a very safe country for women traveling alone. Keeping your usual common sense, you can move around the country without fear at any time of the day or night.

How Safe Is New Zealand for Tourists?

The main problems are related to the theft of things and hacks, attacks, car thefts, vandalism.

Most often, crimes related to dishonest treatment, such as theft, are the most common type of crime.

Keep track of your personal belongings, keep essential documents in the hotel safe, lock the vehicle, and, if possible, park it in secure parking lots.

Violent crimes in public places are usually associated with the use of alcohol or drugs.

It is better to avoid noisy bars or drunken crowds in urban centers or youth groups in the suburbs, especially late at night and in the early morning.

New Zealand has one of the lowest weapon crime rates in the world.

The police in New Zealand work on a large-scale and efficient basis, and many cameras are installed on the streets and roads of the country.

In the event of an incident, always contact the nearest police station, with a high probability they will be able to help you.

New Zealand has a very high level of ultraviolet radiation and skin cancer, around 40% more intense than you will find in the Mediterranean during the summer.

Sunglasses and sunscreen are highly recommended.

Do I Need a Visa to Visit New Zealand?

Foreign nationals wishing to enter the Realm of New Zealand must obtain a visa unless they are a citizen or permanent resident of Australia or a citizen of one of the 60 visa waiver eligible countries and territories. Visitors must hold passports that are valid for at least three months beyond the period of intended stay.

Which Currency Is Used in New Zealand?

The New Zealand dollar is the official currency and legal tender of New Zealand. Within New Zealand, it is almost always abbreviated with the dollar sign ($), with “NZ$” sometimes used to distinguish it from other dollar-denominated currencies. In the context of currency trading, it is often informally called the “Kiwi” or “Kiwi dollar.” The dollar is subdivided into 100 cents.

The best times to visit New Zealand for ideal weather are October to June. Average temperatures in New Zealand vary somewhat, and the weather feels nice most of the year, excluding some cold weeks in the winter, with a fair chance of precipitation about half of the year.

What Do I Need to Know about Airports in New Zealand?

What Are Some Things to Do in New Zealand?

New Zealand is a sovereign island country in the southwestern Pacific Ocean. Travelers come here to see the fantastic landscapes of untouched nature, visit beautiful bays and places of the filming of famous films.

Is the Water in New Zealand Safe to Drink?

Water quality is highly variable throughout New Zealand. Although many alpine rivers and lakes have very high water quality, pollution problems in lowland waterways are, in many cases, serious. Mainly tap water is safe for a drink.

Is Uber Safe in New Zealand?

In New Zealand, there is a taxi Uber. You can use it using the application on your smartphone. The price of the trip depends on the time of day and the distance.