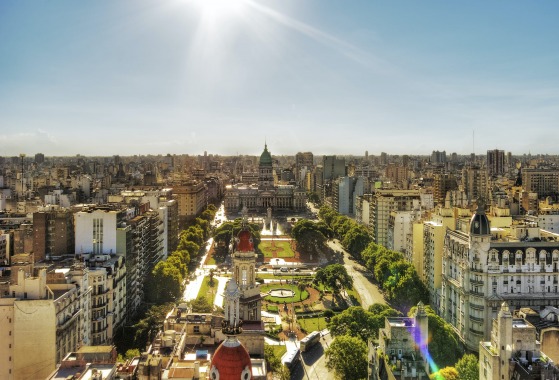 Argentina - safety as a country

Buenos Aires, officially Autonomous City of Buenos Aires, is the capital and largest city of Argentina. The city is located on the western shore of the Río de la Plata’s estuary on the South American continent’s southeastern coast. “Buenos Aires” can be translated as “fair winds” or “good airs.”

Buenos Aires is a popular tourist destination, and it is safe to move around here if you follow certain security measures and avoid disadvantaged areas.

Public transport in the city is generally safe and well distributed. However, pickpockets are often used on buses. Keep track of your belongings. Taxi is a reliable way to travel, use only licensed taxi services.

Pickpockets in the city are found at every turn. There are also a lot of bag snatchers who grab bags at intersections. Don't carry a lot of cash and precious items with you. Store important documents in the hotel safe. Always keep an eye on your pockets and your surroundings.

Argentina is prone to various natural disasters such as earthquakes, volcanic eruptions, and storms that can cause huge flooding. Buenos Aires is also in an area prone to these disasters. Study the natural conditions before your trip here.

Serious attacks and armed robberies sometimes occur in Buenos Aires. However, tourists rarely fall prey to these crimes. In any case, avoid walking late at night and do not walk in areas remote from the city center.

The risk of terrorism is minimal in Buenos Aires. However, the possibility of terrorist attacks in the Argentine capital cannot be ruled out.

Fraud in Buenos Aires is often associated with the desire to deceive tourists by selling things and services at an inflated price. Also, in cafes and restaurants, double-check your change; you may be deceived.

Women traveling alone will feel safe in this city. It is important not to attract the attention of local men with your behavior or clothing. Keep your common sense.

How Safe Is Buenos Aires for Tourists?

Buenos Aires is a very unsafe city to travel to.

The crime rate is high here.

The city has a very high level of corruption.

It is believed that Buenos Aires is a criminal city where they are going to be robbed, kidnapped, and killed.

The truth is that most visitors don’t have any problems in the city.

Buenos Aires is generally safer in terms of crime than other major cities in South America.

Pickpocketing is a big problem in Buenos Aires, as in any other big city in the world.

Be very careful in crowded places in the city center, in crowded subway cars and buses.

It would help if you were wary of people passing by on a skateboard or motorcycle and trying to take your bag or backpack.

Always keep track of your belongings.

Please do not leave them unattended or carry a lot of cash with you.

But La Boca also hides a dangerous side: don’t go far from tourist areas even during the day, and don’t go there after dark unless you really need to.

Do I Need a Visa to Visit Buenos Aires?

Visitors to Argentina must obtain a visa from one of the Argentinian diplomatic missions unless they come from visa-exempt countries. A valid passport is a must.

Which Currency Is Used in Buenos Aires?

The peso is Argentina’s currency, identified by the symbol $ preceding the amount in the same way as many countries using dollar currencies. It is subdivided into 100 centavos.

January and February are the best months to travel to Argentina. In Buenos Aires, the summers are warm, humid, and wet; the winters are cold and windy, and it is partly cloudy year-round.

What Do I Need to Know about Airports in Buenos Aires?

What Are Some Things to Do in Buenos Aires?

In Buenos Aires, you can go for a walk, see opera and tango dancing, watch a football match, or have a leisurely sip of espresso at a local cafe. You will want to stroll around La Boca and San Telmo to shop, watch a street dance performance and stroll through the colorful Caminito.

Is the Water in Buenos Aires Safe to Drink?

The tap water in Buenos Aires is considered safe to drink.

Is Uber Safe in Buenos Aires?

There is an Uber taxi in Buenos Aires. The cost of the trip will depend on the time of day and distance. You can call a taxi from the application on your smartphone.