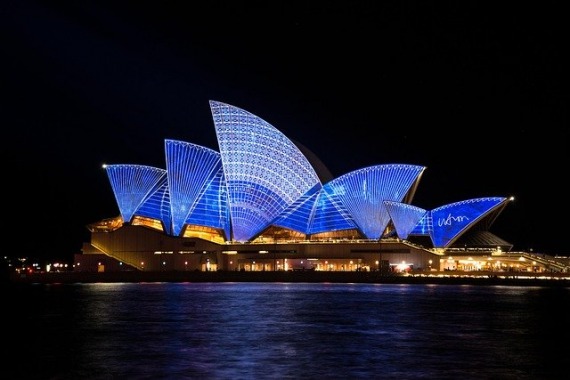 The land of Oz, known also as “The Land Down Under” or officially the Commonwealth of Australia, this wonderful country is known for many interesting things.

Sunny and with numerous beaches, it is a paradise for surfers and enjoyment.

There is more snow in the period starting June up to September than in the Swiss Alps.

If you wish to breathe the cleanest air in the world, go to the island of Tasmania – tourists can enjoy hiking, mountain biking, kayaking or exploring the beauty of the island.

There is something for everyone’s taste.

Out of 162 countries, Australia is ranked 10th for general safety. The crime rates are low and the people are friendly. As long as you don't go alone at night to the secluded areas of the town, you shouldn't have problems.

Transport is safe in Australia. If you want to rent a car and drive, don't forget that they drive on the left side on the road. Have someone remind you often, so you don't get yourself and other drivers in danger. Put a seatbelt on and respect the speed limit.

Pickpocketing rarely happens, but it is more frequent in tourist areas. Thieves often create a diversion to get your attention elsewhere, while they are taking what they want. Keep yourself alert at all times and protect your valuables by placing them in the pockets that are hard to reach.

Australia is susceptible to bushfires, heatwaves, floods, droughts, earthquakes, and tropical cyclones. In recent history, 2 disasters happened. The first one was Victoria Bushfires in 2009 when 209 people lost their lives. The second one was the Queensland Floods that occurred eight years ago when 16 people died.

The crime rate is low in Australia and even though mugging rarely occurs, tourists should be careful. Stay away from the riskier suburbs such as Penrith, Parramatta, and Liverpool. Make sure to carry only the things you need for the day.

The terrorist attacks are not common in Australia, but the government has issued the security protocol for protecting crowded places from potential attacks. Prepare by familiarizing yourself with the strategy in order to know what to do in case it happens.

Scam risk is very high in Australia. Taxi drivers may try to charge you more than they should. Be careful about the taxies you take. When buying something, make sure you check the change twice. Don't use your credit card, unless it is necessary because of the cases of credit card skimming.

Female travelers who wish to travel to Australia can do so since Australia is a very safe country and the locals are helpful and friendly. The official rates concerning crime are very low. However, avoid walking alone at night since that may put you at risk.

How Safe Is Australia for Tourists?

Australia is very safe to visit, but you must follow some general guidelines to be completely safe.

Sidney and Melbourne are the two cities where you might experience pickpocketing.

This is why it’s necessary to keep your wallet in the secured part of the jacket or jeans.

Keep in mind that the ozone layer is damaged in the area above Australia making 15 minutes sufficient for a skin burn.

Sunscreen is mandatory at all times.

If you wish to go to the beach, look for the flag indicating the safety because the waves can be very strong.

Every year about 50 tourists drown because of the strong waves.

If you are not a very good swimmer, avoid going into the water.

Australia is also a home of many dangerous species such as a Box Jellyfish.

Its strong venom can kill a person if there are more than two meters of tentacle contact.

Follow the signs and if there is one saying that the water is not safe, go out immediately.

Australia is also known for dangerous spiders and snakes.

Make sure you don’t get too close to the places known as their habitat.

If you feel a sting and you are not sure what bit you, take a picture of the area where you felt it and go to the hospital immediately.

Do I Need a Visa to Visit Australia?

Most citizens require a visa to enter Australia or to obtain an Electronic Travel Authority.

One blank page is also required for putting an entry stamp.

If you are not sure about your visa status, it is recommended to check it before making arrangements.

Which Currency Is Used in Australia?

The official currency in Australia is the Australian dollar, known also as buck, Aussie and dough.

Due to its enormous size, Australia has a few climate zones – from the mild weather on the south to the tropical climate on the north.

The average temperature during winter is 15°C, while the expected average for the summer is 30°C.

What Do I Need to Know about Airports in Australia?

Australia has even 613 airports in total!

Sidney airport is the largest one and it serves around 42 million passengers a year.

That is truly an incredible number!

There are plans to double the number by 2030.

Traveling to Australia is costly, so make sure you take travel insurance that covers cancelation of the holiday, medical expenses, treatments, as well as specific coverage if you want to engage in some extreme sports activities.

What Are Some Things to Do in Australia?

There are so many beautiful things to see in Australia making it very hard to mention only a few.

In Sidney, you must stop to admire the Opera House.

If you visit Melbourne and you are interested in the subculture, you should visit graffiti alleys with hundreds of colorful graffiti with various motives.

When you want to have some fun, visit the city of Surfers Paradise where the best clubs and bars are located.

Is the Water in Australia Safe to Drink?

Water quality in Australia is very high, so it is safe for drinking and it has good taste too.

There is also bottled water available if you have a sensitive stomach and don’t want to take any risk.

Is Uber Safe in Australia?

The service of Uber is available in Sydney, Melbourne and other big cities in Australia and it’s perfectly safe.

There is also UberPOOL option for some locations where it’s possible to share a ride and a cost with another passenger.