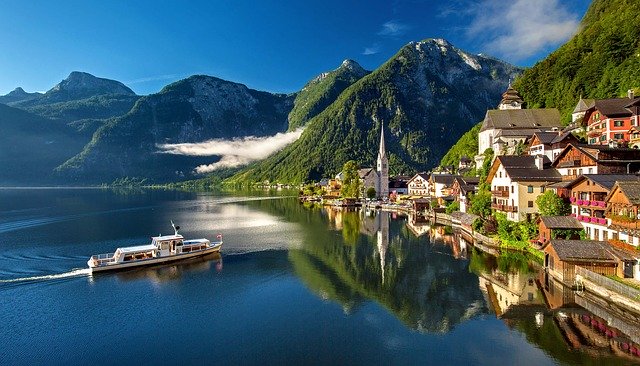 Austria is a perfect blend of urban areas and nature.

It was a home of Mozart, Schubert, Strauss, and many other geniuses.

Once you step your foot on Austria’s ground you will feel the history echoing from all around.

Whether you want to explore Vienna, ski, enjoy the local food or visit museums, you will have plenty to see and try.

Don’t forget to try the famous chocolate Sachertorte and Mozartkugel.

When you want to take a break, enjoy some Austrian coffee or the famous Austrian tea blend.

The locals are pretty relaxed, so you will get some steam off and enjoy your vacation.

Safety is at a very high level in Austria. However, tourists should still take some precautionary measures such as leaving money, passport, and valuables in the hotel's safe deposit box, so you can be sure nothing will happen to it.

Transport is pretty safe in Vienna. You can go by subway, local train, tram, bus or taxi. Choose the one that suits you the most and enjoy it. Vienna transport system relies on honesty, so passengers don't get formal ticket checks.

Pickpocketing can occur in Austria, especially in the tourists' areas and big cities. Luckily, it is not frequent. Tourists should be cautious and keep an eye on their belongings. Secure your valuables and don't carry a lot of things when you go sightseeing.

Austria is susceptible to storms, floods, avalanches and snow pressure. There was a major flood in 2002 that caused € 2.9 billion damage. Just recently, there has been an instance when the mass of snow demolished two houses in Salzburg. There were 2 injured women.

Generally, the risk of mugging is really low in Austria. However, it is always wise to avoid attracting too much attention to yourself by showing your money or other costly possessions. Certain areas of the big cities are best to be avoided.

Terrorism is a great treat worldwide and tourists should always be careful when potentially dangerous situations occur. However, there has been only one potential attack in Austria that was prevented in a timely manner, so there was no harm done to anyone.

Even though the safety in Austria is on the pretty high level, tourists must be careful of scammers who will try to distract you by various methods to take your money, passport or PIN for your credit card. Be very alert.

Vienna is safe for female travelers even at night. Austria is on the 5th place for personal safety out of all the countries in the world. The crime rates are very low. Vienna is the city with the greatest quality of life.

How Safe Is Austria for Tourists?

With 25 million tourists a year, Austria is a very popular destination.

The rate of serious crimes is low, but pickpocketing and scams can occur, so some precaution is advised.

With so many people circulating, you may expect some petty crime to occur.

Protect yourself as much as possible by being alert at all times.

If you notice someone is too friendly and starts asking too many questions, make sure you don’t give too much information.

In case you want to withdraw money on the ATM, be careful because various scams with credit cards occur.

If your credit card gets stuck and someone approaches you to offer help, don’t give your PIN because you can be sure that it is a scam.

Keep your things safe and don’t leave them unattended because that may put you at risk.

Other than that, it is pretty safe for tourists.

Knowing German will make your stay in Austria easier, but many people speak English, especially in big cities.

On the other hand, you may learn some German too if you are eager.

Austrians will certainly appreciate it, so make an effort and at least learn some phrases like thank you and excuse me.

Do I Need a Visa to Visit Austria?

Citizens of third countries that have no agreement with Schengen countries, including Austria, require a visa.

U.S. tourists do not need a visa for visiting Austria for a planned stay up to 90 days.

Which Currency Is Used in Austria?

The official currency of Austria is Euro.

The symbol of the Euro is €.

Credit cards can be widely used in Austria and there are numerous ATMs where tourists can withdraw money.

Austria has a mild climate.

The conditions differ slightly throughout the country.

The region on the north and east has harsher winters and warmer summers, while the part of the country on the southeast has hot summers that last longer.

What Do I Need to Know about Airports in Austria?

There are six airports in Austria.

The biggest one is the Vienna International airport.

It is located 18km away from Vienna city center.

It serves around 27 million passengers per year.

EU citizens have a reciprocal agreement with Austria concerning medical costs, so there is no need for travel insurance.

On the other hand, citizens of the USA, Australia, New Zealand, and Canada don’t have the agreement and require travel insurance.

What Are Some Things to Do in Austria?

Tourists are attracted by Austria’s beauty all year round.

During winter, there are numerous ski resorts where you will be welcomed with warmth.

If you visit during summer, you can explore Vienna and visit one of the open-air cinemas and enjoy the movies by watching them on the enormous screen.

Is the Water in Austria Safe to Drink?

Tap water is drinkable in Austria and very tasty too!

The water comes directly from the Alps and it’s strictly regulated, so there is nothing to be afraid of.

Simply turn on the tap and quench your thirst!

Is Uber Safe in Austria?

Uber exists only in Vienna in Austria and its services are safe.

However, there are many taxi services and some even have apps.