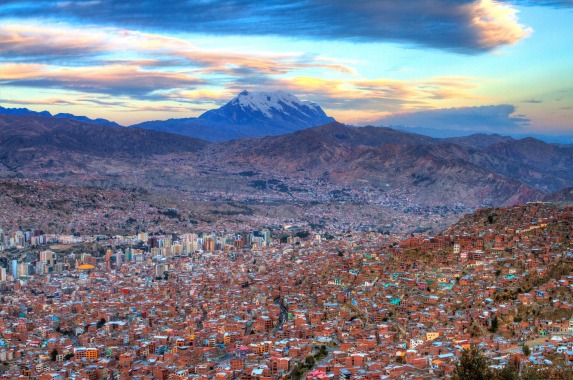 Bolivia - safety as a country

La Paz is the seat of government. The Plurinational State of Bolivia. As of 2020, La Paz, with a population of 816,044 inhabitants, is the third-most populous city in Bolivia. It is also the capital of the La Paz department.

La Paz is not the safest city. Here you have to be on the alert all the time. Keep track of your belongings and your surroundings. Don't trust strangers and don't walk around town late at night.

Public transport is not particularly safe. Cases of kidnapping and pickpocketing are possible. Taxis are safe if you use licensed transportation services.

Pickpockets are prevalent. They can occur in transport, in public places, and crowded places. Use an anti-theft backpack and keep track of your belongings. Don't carry a lot of cash with you.

Floods are possible in La Paz due to the rainy season. Study the natural conditions before your trip here.

Serious robberies and attacks on people are possible in this city. It is necessary to move in groups, not walk around the city late at night, and not participate in showdowns of local gangs. Don't carry a lot of cash or expensive items with you. This can attract criminals. In the event of an attack, give the criminals what they demand, to save your life.

Most often, fraud in La Paz is associated with an attempt to deceive tourists, overcharge the price or give the change from a purchase incorrectly. Double-check everything and watch the people around you carefully.

Women traveling alone may not be safe in this city. Better to be in a group of people and not draw undue attention to yourself with your clothes and behavior.

How Safe Is La Paz for Tourists?

La Paz is generally a safe city to travel to, but the crime rate is average, and there are many types of crimes.

The main problems are related to thefts, burglary of houses and cars, vandalism.

It is important to observe safety measures in this city.

In crowded places, be careful with pickpockets and bags.

A common trick is for one person to spill something on your clothes, and while you or he is wiping it off, another person picks up your wallet or cuts your bag.

Be vigilant when checking into a hotel or hostel.

Don’t trust your luggage to anyone.

Fraudsters often pose as police officers and may even be wearing police uniforms.

Don’t be fooled, don’t give them your documents until they show theirs.

Keep original documents in the hotel safe and carry copies with you.

There were several cases of robbery in a taxi.

Use only licensed taxi services and make sure the driver turns on the taximeter.

If not, agree on the price of your trip in advance.

Another trick used is a “friendly” accomplice who can talk to you on the street, often a young woman or an old woman.

She can explain that it is better to take a taxi than a bus and direct you to an accomplice taxi, which will rob you.

Do I Need a Visa to Visit La Paz?

Citizens (ordinary passport holders) of specific countries and territories are eligible to visit Bolivia for tourism or business purposes without obtaining a visa. A valid passport is a must.

Which Currency Is Used in La Paz?

The boliviano is the currency of Bolivia. It is divided into 100 cents.

Weather year-round is cool to mild, with the average temperature in summer being 22°C and in winter 15°C. Summers can be rainy, and winter temperatures are often shallow.

What Do I Need to Know about Airports in La Paz?

What Are Some Things to Do in La Paz?

In Bolivia, La Paz is the highest administrative capital in the world, resting on the Andes’ Altiplano plateau at more than 3,500m above sea level. It stretches to El Alto city in the highlands, with snow-capped, 6,438m-high Mt. Illimani as its backdrop. The city’s dramatic setting can be taken during rides on Mi Teleférico, the aerial cable car system.

Is the Water in La Paz Safe to Drink?

Tap water is not drinkable. Use bottled tap or boil tap.

Is Uber Safe in La Paz?

There is an Uber taxi in La Paz. The cost of the trip will depend on the time of day and distance. You can call a taxi from the application on your smartphone.