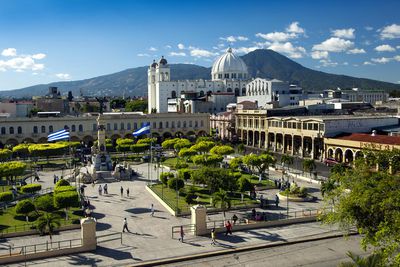 El Salvador - safety as a country

San Salvador is the capital and the most populous city of El Salvador and its eponymous department. It is the country’s political, cultural, educational, and financial center. The Metropolitan Area of San Salvador, which comprises the capital itself and 13 of its municipalities, has 2,404,097.

San Salvador was one of the most insecure cities in the world some time ago. To be here now, you need to monitor your surroundings, not to walk late at night, and not to use unlicensed services.

Public transport is not safe, with frequent robberies and assaults on passengers. Better to use a taxi or a rented car.

Pickpockets can be found on public transport and in crowded places. Also, be mindful of your belongings and surroundings in popular tourist destinations. Don't leave things unattended. Pickpockets also operate at train stations.

San Salvador is at risk of volcanic eruptions and seismic activity. Study the weather conditions before your visit here.

Unfortunately, serious robberies and attacks are not uncommon in San Salvador. Tourists should avoid walking late at night, in remote areas of the city, and not appear on the streets alone. Use a taxi or a rented car to travel around the city.

The risk of terrorism in San Salvador is low. Of course, the risk of attacks still exists due to local gangs' actions and the squabbles between them. Study the political situation in the country before your visit.

The most common fraud in San Salvador is associated with unlicensed taxis, which increase the price of travel for tourists by 2-3 times. Also, be careful with those who ask or offer you help on the street - often, this person distracts you from the actions of another scammer.

Women traveling alone should be cautious in this city. Don't walk alone on the streets, wear modest clothes, and don't draw undue attention to yourself with loud conversations and expensive devices.

How Safe Is San Salvador for Tourists?

San Salvador is not a very safe city to travel to.

No wonder this city is unsafe.

San Salvador was considered the most dangerous city in the world in 1992 due to a 13-year civil war that was ending.

Of course, the crime rate in San Salvador has dropped significantly since then.

The main danger here comes from the gangs, the showdown between which keeps the city’s tension.

When traveling in this city, you must adhere to strict security measures.

Do not walk on abandoned and dark streets, even in broad daylight.

On the public bus, keep valuables out of sight and do not wear expensive jewelry.

Generally though, traveling on public transport is best avoided.

Women are better off dressing and behaving modestly – in this city, open clothes and loud behavior from a woman attracts unwanted female attention.

Do I Need a Visa to Visit San Salvador?

A visa is not required for stays under 90 days, but you must purchase a tourist card for 12 USD upon arrival. The card is valid for 90 days. A valid passport is a must.

Which Currency Is Used in San Salvador?

The colón was the currency of El Salvador between 1892 and 2001 until it was replaced by the U.S. dollar. It was subdivided into 100 centavos.

In San Salvador, the wet season is warm, oppressive, and overcast, and the dry season is hot, humid, and mostly clear. The best time to visit the city is during the dry season, from around December to March.

What Do I Need to Know about Airports in San Salvador?

San Salvador International Airport, located 50 km south of San Salvador. It is the largest airport in Central America, and many national and international airlines serve this airport.

What Are Some Things to Do in San Salvador?

Whilst not on most tourists’ “to do” list in El Salvador, the capital provides a good base for exploring the rest of the country as it’s a transportation hub, with most major roads running through it due to its central location. Spending a few days exploring this cosmopolitan and internationally-conscious city can be a rewarding experience.

Is the Water in San Salvador Safe to Drink?

Is Uber Safe in San Salvador?

There is an Uber taxi in San Salvador. You can call a taxi from the app on your phone. The cost of the trip will depend on the distance and time of day.