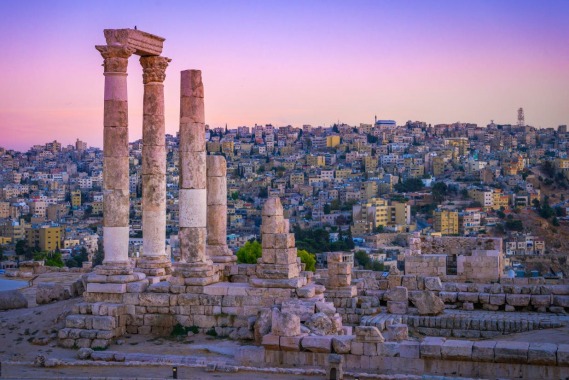 Jordan - safety as a country

Amman is the capital and largest city of Jordan and its economic, political and cultural center. With a population of 4,007,526, Amman is the largest city in the Levant region and the sixth-largest city in the Arab world. Amman derived its name from the 13th century BC when the Ammonites named it “Rabbath Ammon,” with the term Rabbath meaning the “Capital” or the “King’s Quarters.”

Amman is generally a safe city to travel as long as you take precautions, dress modestly, and keep track of your belongings. Pickpocketing in tourist areas is possible.

Public transport is unsafe due to the risk of terrorist attacks. Taxi is a reliable and safe way to travel. Use only licensed taxi services. Don't catch a taxi on the street.

Pickpocketing occurs in public places, tourist spots, and cafes. Tourists are always advised to keep an eye on their belongings and not leave personal belongings unattended. It is better to leave valuables and original documents in the hotel safe.

Amman region is exposed to natural hazards, including earthquakes, droughts, and floods. Explore the natural conditions in the city before your trip here.

Armed abductions and attacks in Amman hardly ever happen. Due to its proximity to Syria and military conflicts, such attacks are possible. But usually, they can happen in the suburbs of the city.

The risk of terrorist attacks in Amman is high due to its proximity to zones of military conflict. Avoid large crowds, do not participate in demonstrations, and be careful when visiting religious sites.

There are severe penalties for fraud and deception in Jordan. Nevertheless, about tourists, incidents sometimes occur. For example, a taxi driver may not turn on the taximeter and state his fare. Usually, it is overstated three times.

Women traveling alone may not feel completely safe in this country. Use common sense, dress modestly, and it is better to walk in the company at night.

How Safe Is Amman for Tourists?

Amman is a relatively safe city to travel to.

The main problems are related to corruption, vandalism, petty theft.

Amman has a high level of personal safety – it is safe to walk around the city at any time of the day or night.

A police presence has been strengthened in the hotel and tourist areas.

It is important to remember that Jordan is a Muslim-majority country with a large Christian population.

Most Jordanians are very welcoming to any foreign visitors.

Although Jordan is generally a free and tolerant country, you should be delicate when discussing political topics to not quarrel with the locals.

Amman is a fairly conservative city, and women should wear modest clothes that cover most of their bodies.

Local men and women may stare at you, but usually, this is not a threat; they are just interested in foreigners.

Although rare, petty thefts do happen in this city, so keep an eye on your belongings and don’t leave your bags and wallets unattended.

Do I Need a Visa to Visit Amman?

Jordan’s visa policy deals with the requirements that a foreign national wishing to enter Jordan must meet to be permitted to travel to, document, and remain in the country. A valid passport is a must.

Which Currency Is Used in Amman?

The Jordanian dinar has been the currency of Jordan since 1950. The dinar is divided into 10 dirhams, 100 qirsh (also called piastres), or 1000 fulus.

In Amman, the summers are long, hot, arid, and clear, and the winters are cold and mostly clear. The best time to visit Amman is April or May.

What Do I Need to Know about Airports in Amman?

Queen Alia International Airport is Jordan’s main and largest airport and is located in Zizya 30 kilometers south of the capital city, Amman. It is named after Queen Alia, who died in a helicopter crash in 1977.

What Are Some Things to Do in Amman?

Amman, the capital of Jordan, is a modern city with numerous ancient ruins. Atop Jabal al-Qala’a hill, the historic Citadel includes the pillars of the Roman Temple of Hercules and the 8th-century Umayyad Palace complex, known for its grand dome. Built into a different downtown hillside, the Roman Theater is a 6,000-capacity, 2nd-century stone amphitheater offering occasional events.

Is the Water in Amman Safe to Drink?

The tap water in Jordan is safe to drink and is classified as such. But if you are not sure about its quality, it’s better to boil it.

Is Uber Safe in Amman?

There is an Uber taxi in Amman. You can call a taxi from the app on your phone. The cost of the trip will depend on the distance and time of day.