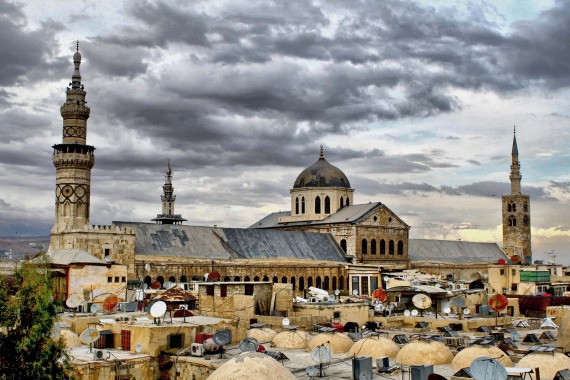 Syria - safety as a country

Damascus is the capital of Syria, the oldest capital in the world, and the fourth holiest city in Islam. It became the country’s largest city, following the Syrian Civil War, surpassing the northern city of Aleppo. It is colloquially known in Syria as aš-Šām and is titled the “City of Jasmine” Damascus is a major cultural center of the Levant and the Arab world. The city had an estimated population of 2,079,000 in 2019.

To travel to this city, you need to prepare and take special security measures, hire a guide and security. In any case, it is better not to go here without an important reason.

Pickpocketing occurs in Damascus at every turn. However, this will not be your biggest problem, as the city itself lives in a military and insecure environment.

Violent crimes in Damascus do exist but are not common, because the country is a war zone and every day is a fight for survival.

Due to the military conflict, the city may be at risk of terrorist attacks. Be attentive, vigilant, and study the political situation before your visit to this city.

How Safe Is Damascus for Tourists?

Damascus is a very unsafe city to travel to.

The crime index here is very high, and most governments in the world do not recommend visiting this city for tourist purposes.

Since 2011, Syria has been in a political crisis, and a civil war is developing in the country.

Unless you have a good reason to go to Damascus, it is better to postpone this trip.

There are constant attacks on locals and visitors, explosions, and shootings.

Traveling here without a guide or protection can be very dangerous.

The rebel forces have also carried out indiscriminate attacks on government facilities and pro-government civilians.

Avoid Aleppo, Idlib, and some other areas.

This is where military action and attacks occur most often.

Plan your trip only with cash – ATMs are practically not serviced here, and cards are not accepted.

Many shops, especially in the old town) change money too.

While officially banned, it’s a handy option when you’re already shopping in the old town and need to swap out some cash quickly.

Just ask the vendors for a money changer and you will soon be directed to a currency exchange store.

Do I Need a Visa to Visit Damascus?

By the Law 2 of 2014 on Entry, exit, and residence of foreigners in Syria, citizens of all countries require a visa to visit Syria. Visas must be obtained from one of the Syrian diplomatic missions in advance.

Which Currency Is Used in Damascus?

The Syrian pound or Syrian lira is the currency of Syria and is issued by the Central Bank of Syria. The pound is subdivided into 100 piastres, although piastre coins are no longer issued. The ISO code for the Syrian pound is SYP.

The best time to visit Damascus is during the spring (March to May) and autumn (September to November).

What Do I Need to Know about Airports in Damascus?

What Are Some Things to Do in Damascus?

Is the Water in Damascus Safe to Drink?

Tap water is not drinkable in Damascus. You should buy bottled water or boil tap water.

Is Uber Safe in Damascus?

There is no Uber taxi in Damascus. You can use any other local taxi services.