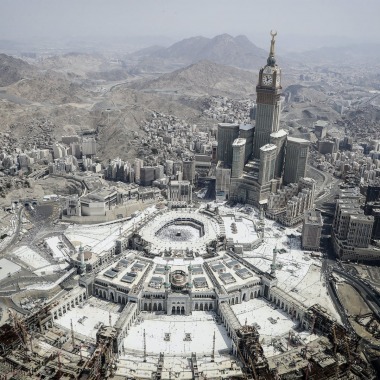 Saudi Arabia - safety as a country

Mecca, officially Makkah al-Mukarramah and commonly shortened to Makkah, is the holiest city in Islam and the capital of the Mecca Province of Saudi Arabia. The city is 70 km inland from Jeddah on the Red Sea, in a narrow valley 277 m above sea level. The estimated metro population in 2020 is 2.042 million, making it the third-most populated city in Saudi Arabia after Riyadh and Jeddah. Pilgrims more than triple this number every year during the Ḥajj pilgrimage, observed in the twelfth Hijri month of Dhūl-Ḥijjah.

Mecca is a fairly safe place. You should follow the usual precautions and watch your pockets.

Heavy traffic jams and crowds of people and traffic are common here. Therefore, be prepared for such a development of events and allow more time to organize the meeting. Use only licensed taxis and make sure the driver uses a taximeter.

It attracts more than 15 million visitors annually, so there is a high risk of pickpocketing. Keep track of your belongings and avoid carrying expensive devices and jewelry with you.

In the summertime, suffocating heat and high temperatures are serious risk factors in Mecca. Tourists need to provide extra water and sunscreen.

The risk of serious robbery and assault is virtually nonexistent in Mecca.

The risk of terrorist attacks is quite high in this region. Study the political situation before your visit here.

In Mecca, as in all of Saudi Arabia, there is practically no type of fraud. In this regard, there is no need to be afraid of such a risk.

It is better for women traveling alone to Saudi Arabia not to come without company. This austere Muslim country recently opened its borders to travelers from all over the world, but the attitude towards single women is still very unfriendly here.

How Safe Is Mecca for Tourists?

Mecca is a safe city.

However, even here, pickpockets and petty fights do occur.

The greatest danger in the city is the mass crush and crowds that gather during religious events.

Mina, Jamrat, and the bridges leading to them are known to be especially dangerous.

However, steps have been taken to mitigate this: there are now four parallel bridges, and the route is now unidirectional.

Pickpocketing is not uncommon during the Hajj.

Therefore, even in this holy place, one cannot relax.

Keep your valuables with you; cash and documents are best left in the hotel safe.

The city has a high level of police presence.

Nevertheless, as in any city where there are many tourists and visitors, it is better to keep track of your belongings, not to trust those who offer or ask for help, to be vigilant.

Use only licensed taxi services and use these services when you need to return home late at night.

Mecca is a sacred place for many Muslims, so it is assumed that there is no criminal activity here.

However, due to a large number of visitors, unpleasant incidents and pickpocketing are possible.

Do I Need a Visa to Visit Mecca?

All visitors, including pilgrims, need a visa to enter Saudi Arabia. Tourist visas are valid for 360 days from the date of issue and can be used for visits of up to 90 days and a total of no more than 180 days in a single year.

Which Currency Is Used in Mecca?

The Saudi riyal; is the currency of Saudi Arabia. It is abbreviated as ر.س or SAR (Saudi Arabian Riyal). It is subdivided into 100 halalas.

In Mecca, the summers are long, sweltering, arid, and partly cloudy, and the winters are short, comfortable, dry, and mostly clear. November-March is the best time to go to Mecca.

What Do I Need to Know about Airports in Mecca?

What Are Some Things to Do in Mecca?

Mecca is the holy city of all Muslims, located in a desolate valley in western Saudi Arabia. This is the place where the Prophet Muhammad was born, and Islam originated. Access to the city is allowed only to Muslims, and millions of followers of this religion gather here during the annual pilgrimage – the Hajj. The main shrine of Islam, the Kaaba, is a cubic building covered with black fabric. It is surrounded by the 7th century Al-Haram Mosque.

Is the Water in Mecca Safe to Drink?

Tap water is safe to drink. In some cases, it may not taste good; use a bottled one.

Is Uber Safe in Mecca?