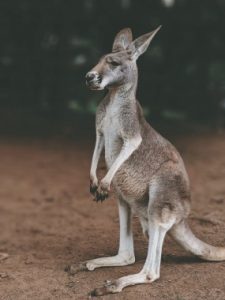 When we think about Australia, the first animal that comes into our mind is a kangaroo.

However, you cannot imagine how many different species live in this exotic country.

Australia is home to some of the strangest wildlife in the world.

What can be found there are numerous creatures ranging from marsupials to reptiles.

As a traveler, you can expect to see kangaroos, koalas, and deadly snakes, as well as some of the other incredible animals that you may have not heard about.

Here are the top 20 most amazing animals in Australia.

Megabats/Flying Foxes – one of the most unique flying animals

Megabats got their name due to their size.

They live in Australia and are scarily huge.

Megabats can weigh up to one kilogram and they boast a wingspan of nearly 5 feet.

Another nickname of these animals is flying foxes being that they are much larger than the average bat.

You can see them living in large colonies and are considered the smartest of all animals in Australia.

According to their look, you can believe that they are blood-thirsty but it is good to know that they only feed on fruit, flowers, and nectar.

Like all the other bats, they sleeping during the day and hunt for food during the night.

What it is important to note is that they can carry viruses harmful to humans.

So, getting too close to them is not suggested.

Kangaroos – the Australian animal and the national symbol

As we have already said, kangaroos are definitely the most famous of all Australian animals.

They are its national symbol, as they can be found all over Australia.

Kangaroos are the largest marsupials on the planet today, with their heights ranging between 5 and 6 feet.

Furthermore, they can weigh up to 120 pounds.

They manage to hop using their powerful hind legs, while their tail enables them to keep their balance.

Kangaroos are also able to leap up to 30 feet in one swift jump.

You can see them eating grasses and other plants, so their perfect habitat is flat, grassy plains and wide-open spaces.

People have seen a few kangaroos sunbathing on beaches, too.

Wombats can be found in the forests and bushlands.

They are considered the cutest Australian animals that can weigh about 60 pounds.

When its size is in question, they can reach the size of a pig.

Wombats are easily recognized due to their strong claws and legs used for burrowing.

As they are diggers, they have pouches so that their babies are protected from dirt.

You cannot see them during the day, being that they are nocturnal animals.

But, at night, they come out looking for food  – leaves, plants, and roots.

Their habitat is wet, forested areas with slopes.

These cute creatures can be seen in the southeastern coastal regions of Australia, such as eastern New South Wales, eastern and southern Victoria, southeastern South Australia, as well as Tasmania.

These are wild dogs that can be found throughout the whole country.

When their appearance is in question, dingoes are medium-sized animals that can weigh between 30 and 55 pounds.

Those dingoes that we can find today are usually cross-bred, as a pure dingo is very hard to find.

If you wish to see dingoes, you should visit the large sand island Fraser Island.

Quokkas –  the happiest animals in the world

You may have not heard about them, but quokkas are animals that are considered the happiest animals in the world.

They are not present anywhere in Australia but if you want to see them, you should visit Rottnest Island where around 10,000 of them live.

The majority of tourists actually visit this island so as to make “Quokka Selfies”.

They are called the happiest animals on earth being that they look like smiling all the time.

Koalas – one of the most famous and cutest animals

Koalas are also famous and cute animals in Australia.

They are so soft animals, that have gray and white fur and large ears.

Being that koalas have very bad eyesight, they depend on other senses, such as hearing and smell.

These senses enable them to protect themselves from predators.

You may notice their strong arms and claws which are used to climb eucalyptus trees.

They climb in order to find the leaves that they eat.

Koalas can be found sleeping during the day, as they spend only a few hours on climbing and eating.

Saltwater Crocodiles are considered the world’s largest living crocodilian, so it is normal that people fear them the most.

They are also the largest of all Australian animals.

Males are larger than females, and their size ranges from 14 to even 18 feet in length.

So, it is always suggested to look at them only from a distance.

They eat other reptiles, fish, and birds, but it is not uncommon that they eat animals as large as cattle and buffalo.

Saltwater crocodiles can live 60 to 80 years, and they belong to endangered species.

Those of you who wish to see one can easily find a saltwater crocodile as their habitat ranges from Broome in Western Australia, through the entire  Northern Territory coast as well as in Rockhampton in Queensland.

Even though Tasmanian Devils are quite rare Australian animals, they are definitely one of the most amazing animals in Australia.

They can be found in Tasmania, as well as along the southeastern coast of Australia.

Tasmanian devils are the biggest carnivorous marsupials and can reach about 3 to 4 feet in length. They are easily recognized due to their black color with unusual white markings on the chests.

This marking makes each devil unique.

Tasmanian devils come out at night and eat birds, lizards, and dead animals that they come across.

Unfortunately,  Tasmanian Devils belong to the group of Several Australian animals that are considered endangered.

Sugar Glider is the name for cute possums, animals that are native to Australia.

Their name comes from the fact that they like sweet things and that they can also glide.

They can be found living in family groups and eating sweet things such as sap and nectar.

It is worth mentioning that even though they are so cute, you should just look at them but do not touch them.

Giant Wrasse – the most famous fish on the Great Barrier Reef

Some people go to the Great Barrier Reef so as to meet Wally.

Wally is the legendary giant humphead Maori Wrasse that can be lives off a boat tour marine base.

What made him famous is the fact that he is playful, so he loves to play with the divers and snorkelers that swim there.

He is considered a local celebrity, due to his great sense of humor and posing for selfies.

Sadly, these species are endangered.

People who have traveled around Australia could have heard the insult ‘you flaming galah.’

Actually, the bird hides behind the phrase, but we need to say that this bird is beautiful.

This is a common bird in Australia, that is of grey color with rose-colored breasts.

While some people consider them cute, others think that these animals are odd-looking.

Long-Nosed Bandicoots are marsupials that are native to Australia and can be 30 to 80 cm in length.

They look like a rat, have grey-brown coarse hair and a long snout nose.

The long-nosed bandicoots come out at night and look for invertebrates, fungi, and a variety of species of plants to eat.

Inland Taipan – the deadliest snake in the world

The Inland Taipan has to be mentioned, as this snake is the most deadly one in a country that is filled with deadly snakes

The Inland Taipan is actually ranked the deadliest snake in the world as it possesses the venom in each bite that can kill more than 100 men.

The good thing about this snake is that it is actually quite shy and is unlikely to attack.

You can find these snakes, even though we do not recommend that you look for one, in semi-arid areas in central east Australia.

The kookaburra bird is definitely a fascinating Australian animal.

What made it famous is its funny human-like laugh, so it got the nickname the laughing bird.

Kookaburras can be 18 inches long, and they can be easily recognized due to their bodies that are a dark brown color on top and white underneath.

Plus, their wings are quite distinctive as they have gray and blue spots on them.

These are native Australian birds that live in forests and wooded areas.

You can usually find them in tree holes, as those are their preferred homes.

Australians are so grateful to this bird because it eliminates many known pests.

People frequently hear its high-pitched laugh-like calls, so the kookaburra is also known as the “bushman’s clock.”

The duck-billed platypus is definitely a unique and truly incredible animal that is native to Australia.

People consider it an extraordinary creature and when it was discovered, it was believed to be a hoax.

They live in Eastern Australia as well as Tasmania and they belong to a group of the most unusual creatures in the whole animal kingdom.

Thorny Devils are incredible creatures who are also known as the mountain devil.

It is difficult to see them as they are colored in camouflaging shades.

This animal collects water by standing in a puddle or moist sand.

The collected water runs up its legs and spreads over the surface of its body to the mouth.

Thorny Devil is native to Australia and lives in the arid scrubland and desert.

You can find them if you travel through the Red Centre.

Thorny Devils are up to 8 inches in length and eat only small black ants.

Emus – the famous bird and another symbol of Australia

We cannot finish the list of Australian Animals without mentioning the emu.

This is the incredible quirky bird that is flightless and native to Australia.

Emus are huge birds huge, with a height of up to 5 feet and a weight of more than 45 kg.

They are also very fast so we suggest that you do not approach them.

They live all over Australia, but can rarely be seen in heavily populated areas.

You can find them in forests, savanna woodlands, and grasslands.

Budgies – the gorgeous birds in their natural habitat

Budgies are typically kept in cages all over the world, however, in Australia, they can be seen flying around free in the wild.

Their favorite food is seeds and you can find them through most of Australia’s interior west of the Great Dividing Range.

Do not try seeing them in Tasmania, Cape York, or the coastal areas of eastern, northern, or south-western Australia, as they do not live in these places.

The numbat is also known as a banded anteater, due to the fact that it bears 6 or 7 white bands across its back.

They weigh only 1 pound, and their front feet are used to dig for termites.

Numbats have 52 teeth, and each tooth is of a different size and shape.

Funnel Web Spider – one of the scariest creatures in Australia

This is only one of many of Australia’s scary and poisonous spiders.

Even though they are incredible creatures, we do not recommend going hunting for them.

Funnel Web Spider is the most dangerous spider on Earth, as it can kill a human in just 15 minutes.

If you still want to look for them, they can be found on Australia’s eastern coast, from New South Wales to Queensland.