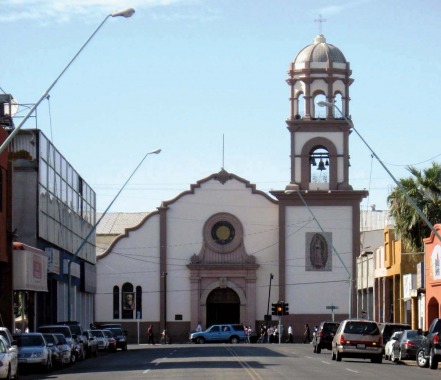 Mexicali is the capital city of the Mexican state of Baja California and seat of the Municipality of Mexicali. Mexicali became the national center for the aerospace industry in Mexico when Rockwell Collins established an operation there in 1966. Rockwell Collins is the oldest company under the maquiladora program nationwide.

Mexicali is not the safest city, but if you avoid distant districts from the city center and do not walk alone late at night, you can avoid most of the problems in this city.

Pickpocketing occurs in Mexicali at every turn, so wear an anti-theft backpack, look after your belongings, and don't leave your phones and wallets unattended. In crowded places, keep an eye on your surroundings.

Mexicali is somewhat prone to earthquakes. They're not very common, but you should still be aware of this and take necessary precaution measures in the off chance it happens.

The most common scams in Mexicalli are related to street beggars. Be suspicious of anyone who asks or offers you help.

How Safe Is Mexicali for Tourists?

Mexicali is not the safest place to travel.

The main problems are related to drug trafficking, vandalism, corruption, and theft.

It is important to remember that because of the drug trade, there are many clashes and showdowns of local gangs.

Better to have a friend or companion in this city.

Any unlawful action here will entail severe punishment and a term in prison.

There is no need to hide the fact that you are a foreigner, but respect local laws, customs, and culture.

Do not give bribes to the police, and make sure that you are not extorted.

If you try to bribe, you will be sent to jail.

It is prohibited to bring weapons to Mexico.

Even if it could be a small pocket knife or even cartridges or casings.

In case of an earthquake, go to the shelter, which is marked around the city.

As in any city, use common sense, do not shine with many cash and expensive things.

Do I Need a Visa to Visit Mexicali?

Which Currency Is Used in Mexicali?

In Mexicali, the summers are sweltering and arid, the winters are cool and dry, and it is mostly clear year-round. The best time to visit Mexicali in Mexico is from January until May and September until December.

What Do I Need to Know about Airports in Mexicali?

General Rodolfo Sanchez Taboada International Airport is located in Mexicali, near the state border between the United States and Mexico.

What Are Some Things to Do in Mexicali?

In this city, you can visit the forest and the zoo, the national arts center, and enjoy the Algodones Dunes’ views and the famous Guadalupe Canyon.

Is the Water in Mexicali Safe to Drink?

In general, the water in Mexicali is not safe to drink.

Is Uber Safe in Mexicali?