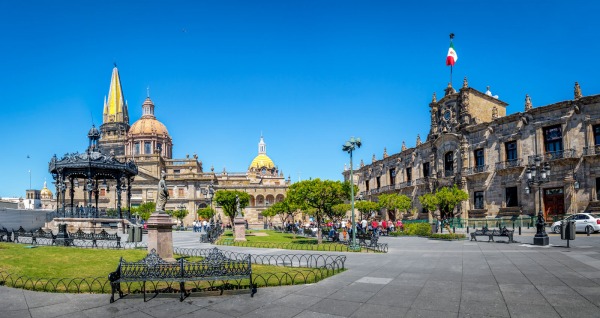 Guadalajara is a metropolis in western Mexico and the capital of the state of Jalisco. According to the 2020 census, the city has a population of 1,385,629, making it the third-largest metropolitan area in the country. Guadalajara is an international center of business, finance, arts, and culture, as well as the economic center of the Bajío region, one of the most productive and developed regions in Latin America.

Guadalajara is not the safest place to travel. However, tourists usually stay safe if they keep their common sense, watch their belongings, and not get involved with drugs.

Public transport is not safe and may not run on schedule. Also, pickpockets often wield it. Taxi is a safer way to travel but only use licensed taxis.

Pickpockets are found in tourist spots and crowded places. Keep track of your belongings and always keep your bags and wallets insight. At the crossroads of the city, there are frequent cases of bags snatched by thieves on mopeds.

We can say that there are no dangers in Guadalajara, except for some hurricanes that can occur. Mexico is prone to earthquakes, hurricanes, and active volcanoes, so it is important to be aware of the weather conditions when traveling to this city.

Armed attacks and robberies happen, as do kidnappings. However, they usually do not concern tourists. Do not walk alone at night in dangerous places. In the event of an attack, give the burglars what they ask for to save lives.

The risk of external terrorist attacks is minimal. Usually, there are showdowns among local drug gangs. Avoid demonstrations and large gatherings.

Withdraw money only from ATMs at banks to avoid skimming your credit cards. Also, be wary of those who ask or offer you help. Remember that there is no free help even if you are told so.

Women traveling alone can be safe in Guadalajara if they do not leave resorts and tourist areas at night. Women should avoid drawing undue attention to themselves and wear modest clothing.

How Safe Is Guadalajara for Tourists?

Guadalajara is not the safest place to travel.

The main problems are related to corruption, drug trafficking, violent crime, and theft.

The usual precautions should be followed here as in any other large city.

Crimes against tourists and international students are not very common.

Criminals usually work in groups and target travelers in crowded places such as open-air restaurants.

It would help if you always looked after your belongings, especially in cafes and in public places.

Never mess with drugs; remember that they are illegal here, and the punishment for drug dealing will be very harsh.

Use only licensed taxi services and make sure the driver turns on the taximeter.

Never catch a taxi from the street – these are the taxis that are often scammed.

Double-check your change and discuss the fare in advance if there is no taximeter in the car.

Keep valuables and documents in the hotel safe; it is better to carry only a copy with you.

If you are attacked, give the robbers what they ask for to save their lives.

Do I Need a Visa to Visit Guadalajara?

Which Currency Is Used in Guadalajara?

In Guadalajara, the wet season is overcast; the dry season is partly cloudy and warm year-round. The best time to visit Guadalajara is between October and December when the weather is dry.

What Do I Need to Know about Airports in Guadalajara?

What Are Some Things to Do in Guadalajara?

Guadalajara is known for tequila and mariachi music, both born in Jalisco, which Guadalajara is the capital. Guadalajara’s historic center is dotted with colonial plazas and landmarks such as the neoclassical Teatro Degollado and a cathedral with twin gold spires. The Palacio del Gobierno houses famous murals by painter José Clemente Orozco.

Is the Water in Guadalajara Safe to Drink?

Is Uber Safe in Guadalajara?

There is an Uber taxi in Guadalajara. You can call a taxi from the app on your phone. The cost of the trip will depend on the distance and time of day.