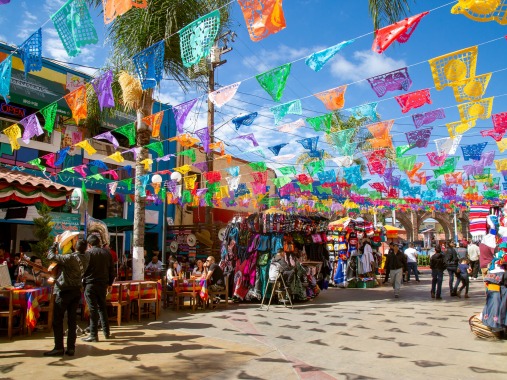 Tijuana is a city in Baja California, Mexico. It is part of the San Diego–Tijuana transborder urban agglomeration and the larger Southern California megalopolis. As the 2nd-largest city in Mexico and center of the 6th-largest metro area in Mexico,Tijuana exerts a strong influence in education and politics, in transportation, culture, art, and manufacturing, and as a migration hub.

Tijuana is not the safest city, but if you avoid distant districts from the city center and do not walk alone late at night, you can avoid most of the problems in this city.

Public transport is well developed but maybe not very safe. Keep an eye on your wallets on buses to avoid pickpocketing. Use only licensed taxi services.

Pickpocketing occurs in Tijuana every turn, so wear an anti-theft backpack, look after your belongings, and don't leave your phones and wallets unattended. In crowded places, keep an eye on your surroundings.

Tijuana is not exposed to any serious risks of natural disasters. Just be aware of hot weather in summer.

In the suburbs of Tijuana, local gangs' showdowns take place; during these showdowns, there are shootings and kidnappings. Avoid these areas and don't get involved with drugs.

Women traveling alone in this city should avoid late-night walks and be very discreet on the city streets. Heightened precautions won't hurt.

How Safe Is Tijuana for Tourists?

Tijuana is a rather unsafe city with a high crime rate.

Tijuana has a reputation for being a troubled city.

However, the joint actions of the government and the police seriously weakened the cartel showdown in the city.

The eastern part of Tijuana is hazardous and prone to violence.

The Norte area can also be hazardous if you walk alone.

Most of the drug-related violence in Tijuana takes place in these two parts of the city.

Most drug-related violence is not directed against tourists but rival drug cartels and the Mexican police.

However, tourists can get caught up in these events.

Most tourist sites (for the most part) are generally safe, such as the heavily patrolled Avenida Revolucion, Playas de Tijuana, Rio Zone, and Tijuana’s red-light district in Zona Norte.

If you are traveling in your own car, park in well-marked, guarded parking lots.

And never leave personal belongings in the car when you leave – thieves will easily break into your car for profit.

Illicit drugs and drunk driving are severely punished in Mexico.

Use common sense and keep track of your belongings.

In any case, do not trust those who ask for or offer you free help.

Do I Need a Visa to Visit Tijuana?

Which Currency Is Used in Tijuana?

In Tijuana, the summers are short, warm, arid, and mostly clear, and the winters are long, cool, and partly cloudy. May-September: An excellent season to visit Tijuana.

What Do I Need to Know about Airports in Tijuana?

What Are Some Things to Do in Tijuana?

Tijuana is a large, modern, and colorful city. Its location in the top left corner of Mexico, right on the border of the United States south of San Diego, makes it a popular spot for day-trippers who want to hop across the border to enjoy some Mexican color, eat some great food, and do a bit of shopping before heading back.

Is the Water in Tijuana Safe to Drink?

Tap water in Mexico is generally not safe to drink.

Is Uber Safe in Tijuana?