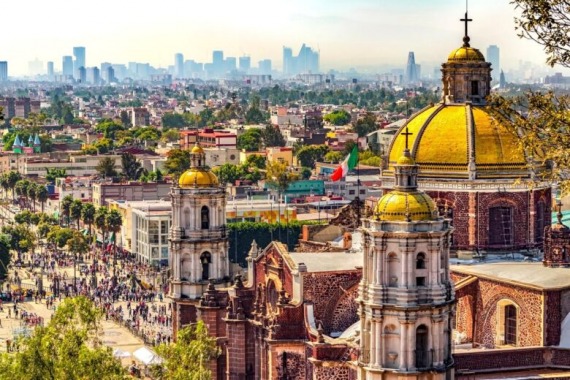 Mexico City is the capital and largest city of Mexico and the most populous city in North America. Mexico City is one of the most important cultural and financial centers in the world. It is located in the Valley of Mexico, a large valley in the high plateaus in Mexico’s center, at an altitude of 2,240 meters. The city has 16 subdivisions, formerly known as boroughs.

Mexico City is a very insecure city. Attacks and violent crimes are frequent here. To travel around this city, you need to observe increased security measures, do not walk late at night, and not be alone in remote areas from the city center.

Public transport is not safe, mainly if used during rush hour or at night. Use a taxi to get around the city. Never catch a taxi from the street.

Pickpocketing is the most common crime in Mexico City. Keep track of your belongings anytime, anywhere. Do not leave things unattended, even for a minute. Keep valuables and documents in the hotel safe and carry a copy with you.

Mexico City is located in an earthquake-prone region. Explore the natural conditions before going here.

Severe attacks and robberies happen in Mexico City. Unfortunately, tourists are also often victims of such attacks. Avoid walking alone and at night. Don't carry a lot of valuable items with you. In the event of an attack, give the criminals what they demand of you.

The risk of external terrorist attacks is minimal. Usually, there are showdowns among local drug gangs. Avoid demonstrations and large gatherings.

Withdraw money only from ATMs at banks to avoid skimming your credit cards. Also, be wary of those who ask or offer you help. Remember that there is no free help even if you are told so.

Women traveling alone are not advised to be in this city on their own. Take care of the men’s company and do not walk the city streets late at night. Local men can whistle after you, so do not draw undue attention to yourself with too open clothes or your behavior.

How Safe Is Mexico City for Tourists?

Mexico City is not a safe city to travel to.

The crime index is at a high level here.

Pickpocketing is a huge problem in Mexico City.

They are mostly active in the Zocalo area and the Greater Historical Center, especially in crowded metro cars and buses.

You should always keep track of your belongings!

Leave your valuables in the hotel safe and carry copies of documents with you.

It is convenient to use the anti-thief backpack.

Try not to take the metro during rush hour (6-9 and 17-20), as it is always very crowded and pickpockets.

Some metro stations are dangerous after dark, and since buses are less frequent, you may be stuck alone at the bus stop for a while. Better to take a taxi or use Uber.

Never catch a taxi on the street.

A general rule of thumb in Mexico City is not to walk alone at night, especially if you are a woman.

In bars and nightclubs, do not leave your drink unattended – opiate may be added to it to rob you.

If you are attacked, do not resist. All thieves need is your money, jewelry, cameras, or whatever you have with you.

Do I Need a Visa to Visit Mexico City?

Which Currency Is Used in Mexico City?

In Mexico City, the wet season is warm and overcast, and the dry season is comfortable and partly cloudy. The best time to visit Mexico City is between March and May, even though the streets are pretty crowded this year.

What Do I Need to Know about Airports in Mexico City?

What Are Some Things to Do in Mexico City?

Mexico City is the densely populated, high-altitude capital of Mexico. It’s known for its Templo Mayor (a 13th-century Aztec temple), the baroque Catedral Metropolitana de México of the Spanish conquistadors, and the Palacio Nacional, which houses historic murals by Diego Rivera. All of these are situated in and around the Plaza de la Constitución, the massive main square also known as the Zócalo.

Is the Water in Mexico City Safe to Drink?

Is Uber Safe in Mexico City?

There is an Uber taxi in Mexico City. You can call a taxi from the app on your phone. The cost of the trip will depend on the distance and time of day.