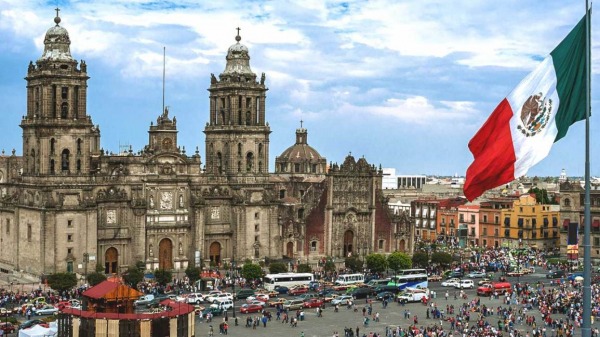 Mexico has an average level of travel safety. Some cities here may be safer; some may have rampant crime. Proper travel insurance and common sense will help to spend a pleasant time in Mexico.

Use public transport in Mexico very carefully. Pickpockets can operate in crowded buses, and in intercity buses, terrorist attacks are possible. Taxis are safe if you use licensed taxi services.

Pickpockets in Mexico are quite common. Do not leave things unattended, and always watch your surroundings. Be careful with those who ask or offer you help on the street - these may be pickpockets. Keep an eye on your wallet at tourist destinations, train stations, and airports.

Mexico is highly exposed to many natural hazards. Over 40 percent of the country's territory and nearly a third of the population is exposed to hurricanes, storms, floods, earthquakes, and volcanic eruptions.

Unfortunately, armed attacks and even kidnapping are not uncommon in Mexico. Usually, they attack solo travelers, those who sit up in a bar or walk around the city late at night. Use a taxi to return to the hotel if it is already evening and avoid any drunken showdowns on the street.

Terrorist attacks in Mexico are rare, but firearm skirmishes and terrorist attacks are possible during drug cartel disassembles. Avoid the dysfunctional areas and watch the political situation in the country before you visit Mexico.

The risk of fraud in Mexico is very high, especially for Western tourists. Always be on the alert, watch your surroundings. Buy services and items only in licensed locations and stores. Use only the recommended taxi services, including from the applications on your phone.

Since traveling alone is not recommended in Mexico, women are also better off staying with the company while traveling in this country. Depending on the region of Mexico, solo travel, in general, can be safe. But in the border and poor areas of the country, traveling alone can attract criminals to your person.

How Safe Is Mexico for Tourists?

Mexico is a popular travel destination, but this country has some regions that are more dangerous to travel.

In most cities in Mexico, areas close to the city center are safer for walking at night, especially in the Plaza, Zocalo, or Jardin (main square) and surrounding areas. Stay in densely populated areas, avoid poor neighborhoods, especially at night, and don’t go there anytime if you are alone.
Most often, traveling alone in Mexico is not safe; it is better to be in the company, as loners are more often attacked.

Drug trafficking and related crimes are a big problem in Mexico.

Avoid any contact with drug dealers and remember that drug abuse is illegal in this country.

As in any city, do not wave cash or credit cards.

Use them carefully and remove them as quickly as possible.

The country has rather severe penalties and fines, so follow local laws and adhere to the recommended rules of conduct.

There are many beggars and thieves on the streets of large cities.

They can chase tourists and extort money.

Some cities, such as Guadalajara and Mexico City, are safer than most places in Mexico.

However, caution is still recommended.

Do I Need a Visa to Visit Mexico?

A foreign national wishing to enter Mexico must obtain a visa unless they are a citizen of one of the 67 eligible visa-exempt countries or one of the three Electronic Authorization System eligible countries. A valid passport is a must.

Which Currency Is Used in Mexico?

What Do I Need to Know about Airports in Mexico?

What Are Some Things to Do in Mexico?

Mexico is a state located between the USA and the countries of Central America. It is famous for its beaches on the shores of the Pacific Ocean and the Gulf of Mexico and its diverse landscape. There are mountainous terrain, deserts, and rainforests. Throughout the country, you can see the ruins of ancient buildings, such as Teotihuacan and Chichen Itza of the Mayan times. There are also many cities in the era of Spanish colonization. The capital of Mexico, Mexico City, is a modern city where there are prestigious shops, famous museums, and fine restaurants.

Is the Water in Mexico Safe to Drink?

Mexico’s water is running out — and much of the water that remains is toxic. Tap water isn’t drinkable in Mexico.

Is Uber Safe in Mexico?

Uber taxi is available in Mexico. The price of the ride will depend on the time of the day and destination.