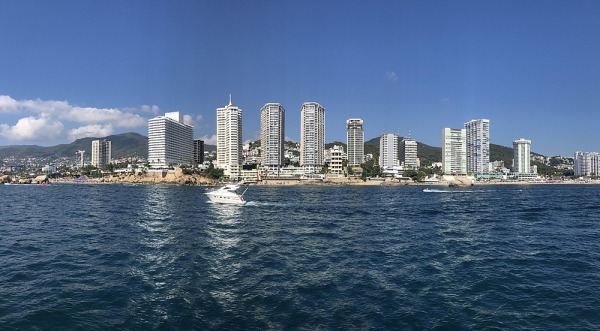 Acapulco de Juárez, commonly called Acapulco, is a city and major seaport in Guerrero’s state on the Pacific coast of Mexico, 380 kilometers south of Mexico City. Acapulco is located on a deep, semicircular bay and has been a port since the early colonial period of Mexico’s history.

The crime rate in Acapulco is high, but the tourist areas and resorts are relatively safe. If tourists take precautions and keep track of their belongings, they stay safe.

Public transport may not be safe due to a large number of pickpockets. Taxi is a safe and convenient way to travel but use only licensed services.

Pickpockets are prevalent. Thieves target tourists who are not looking after their belongings. Be especially careful around train stations, airports and on public transport. Also, never leave your belongings unattended on the beach.

Acapulco is located in a seismically hazardous area, and earthquakes are possible here. However, they should not be feared - they are usually not of high magnitude.

Armed attacks and robberies are familiar, like kidnapping. However, they usually do not concern tourists. Do not walk alone in dangerous areas at night. In the event of an attack, give the robbers what they ask for to save a life.

Acapulco's most common scam is when a fraudster pretends to be a police officer and solicits bribes/fines. Be very careful and ask the authorities for documents.

Women traveling alone can be safe in Acapulco if they do not leave resorts and tourist areas at night.

How Safe Is Acapulco for Tourists?

Acapulco is not considered the safest place to travel.

The main problems are related to theft, vandalism, drug trafficking, and assault.

It is important to remember that most murder victims in Mexico are involved (directly or indirectly) in a life of crime, and the most common cause of their death is gang violence.

Of course, there is a visible minority of innocent victims who just happened to be in the wrong place at the wrong time.

Still, as a tourist, you have nothing to fear from Acapulco since Acapulco is completely safe for tourists.

Drug-related violence is on the rise in Acapulco, according to the US State Department.

While this violence does not target foreign residents or tourists, US citizens in these areas must be vigilant about their personal safety.

For the average tourist, the most common danger comes from the local police.

Bribery and extortion are everywhere.

Basically, if you drive a nice, clean car (it doesn’t matter if you rented it), you can most likely expect to be stopped and accused of driving a red light (even if the traffic light was off), not using a mirror, misuse of lanes, etc.

Do I Need a Visa to Visit Acapulco?

Which Currency Is Used in Acapulco?

In Acapulco de Juárez, the wet season is overcast, the dry season is partly cloudy, hot and oppressive year-round. The best times to visit Acapulco are April, May, October, and November.

What Do I Need to Know about Airports in Acapulco?

What Are Some Things to Do in Acapulco?

Acapulco, a beach resort town on Mexico’s Pacific coast, is set on a large bay backed by high-rises and the Sierra Madre del Sur mountains. Made famous by the jet set in the 1950s and ’60s, it’s known for its high-energy nightlife, beaches, and golf. From its iconic La Quebrada cliff, professional divers plunge 40m into a small ocean cove every day and night.

Is the Water in Acapulco Safe to Drink?

Is Uber Safe in Acapulco?

There is no Uber taxi in Acapulco. You can use any other local taxi services.