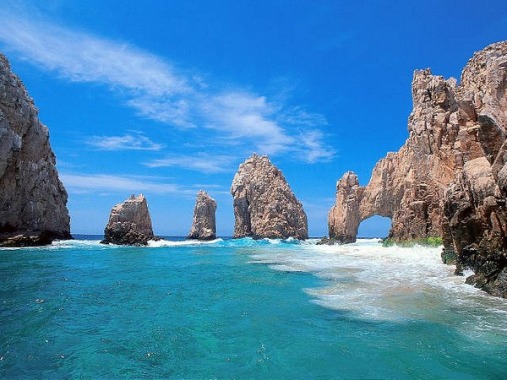 Cabo San Lucas, or simply Cabo, is a resort city at the southern tip of the Baja California Peninsula, in the Mexican state of Baja California Sur. Cabo San Lucas, together with San José del Cabo, is known as Los Cabos. Together, they form a metropolitan area of 351,111 inhabitants. Rated as one of Mexico’s top 5 tourist destinations, Cabo is known for its beaches, scuba diving locations, balnearios, the sea arch El Arco de Cabo San Lucas, and marine life.

Cabo San Lucas has an average crime rate; pickpocketing is frequent. Usually, tourists are not concerned with most of the problems if they do not leave the tourist area. At night, it is best to avoid walking around the city and the coastal zone.

Public transport is unreliable, often late, and pickpockets are frequent. It is best to use a taxi service, but never call a taxi from the street.

Pickpockets are prevalent. Thieves target tourists who are not looking after their belongings. Be especially careful around train stations, airports and on public transport. Also, never leave your belongings unattended on the beach.

From July to September, the region is at risk of hurricanes. However, this risk is not very high; follow local authorities' instructions if a storm strikes in your city.

Armed attacks and robberies are familiar, like kidnapping. However, they usually do not concern tourists. Do not walk alone in dangerous areas at night. In the event of an attack, give the robbers what they ask for to save a life.

Scams in the city are often associated with attempts to defraud tourists. Be careful, buy goods and services in licensed places. Be considerate of those who ask for or offer help.

Women traveling alone can be safe in Cabo San Lucas if they do not leave resorts and tourist areas at night.

How Safe Is Cabo San Lucas for Tourists?

The main problems are related to corruption and bribery, violent crime, theft, and assault.

“Increased caution” is needed when traveling to Cabo San Lucas due to “criminal activity and violence.”

However, it should be noted that most forms of violence in Baja California – murder, kidnapping, extortion, etc. – are linked to the war on drugs, so travelers were mostly spared.

When traveling in Cabo San Lucas, limit your walks to the daytime.

Beware of pickpockets and other thieves.

Don’t call a taxi on the street; use a taxi from apps on your smartphone.

In Cabo San Lucas, swimming in the ocean can be risky.

There are almost no lifeguards on the beach.

Swim only in your hotel’s pool or on the notoriously safe beach, most of which are on the eastern side of the Baja Peninsula.

Know how to identify and avoid these species, but if you are bitten, seek immediate medical attention.

Do I Need a Visa to Visit Cabo San Lucas?

Which Currency Is Used in Cabo San Lucas?

In Cabo San Lucas, the summers are long, hot, oppressive, and mostly cloudy, and the winters are comfortable, dry, and partly cloudy. The best time to visit Cabo is from May to June when the wintertime crowds have gone home, and the summertime storms have yet to hit.

What Do I Need to Know about Airports in Cabo San Lucas?

What Are Some Things to Do in Cabo San Lucas?

Cabo San Lucas, a resort city on the southern tip of Mexico’s Baja California peninsula, is known for its beaches, water-based activities, and nightlife. Playa El Médano is Cabo’s main beach, with outdoor restaurants and numerous bars. Past the marina is Land’s End promontory, the site of Playa del Amor (Lover’s Beach) and El Arco, a natural archway in the seacliffs.

Is the Water in Cabo San Lucas Safe to Drink?

There is an Uber taxi in Cabo San Lucas. You can call a taxi from the app on your phone. The cost of the trip will depend on the distance and time of day.