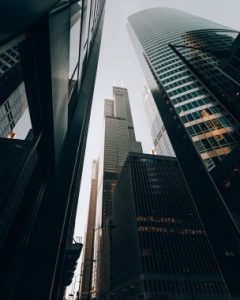 Sometimes a gorgeous skyline becomes a symbol of the city it is located in.

In the past, only big cities could boast about having a skyline, but nowadays not just Hong Kong and New York City have them.

Actually, you can find stunning skylines all over the world, and not only in huge cities.

What makes a skyline amazing when looking at it are bright lights, tall buildings, and stunning architecture.

Usually, this is unique to that particular area of the world.

However, we were trying to answer a question what makes a great skyline – the height of the skyscrapers or the shade of neon used to light them?

Some people think that the way the buildings are put together to form one complete picture is what amazes travelers.

So as to see all the stunning skylines across the globe in one place, we decided to make a list of what we think are the twenty most impressive skylines in the world.

Let’s travel through some of the greatest cities, from the US to China, and Canada to Australia.

20. Boston, Massachusetts, USA – one of the best US skylines

The best view of the Boston skyline is at night, due to the fact that tall buildings and colorful lights reflect onto the water.

This scene is something that most cities can only dream about.

Boston is one of the oldest cities in the country, so the buildings are not huge, but they are so gorgeous and well-lit.

It is not the height that creates such a picturesque view.

We think that everyone will love to see this skyline in person.

19. Houston, Texas, USA – one of the best city skylines in the world

Houston is a huge city in Texas with roughly 2.3 million people living there.

It is also the fourth largest city in the United States.

If we think about its skyline, we can say that it offers a view that is one in a million.

No matter where you stand while you are looking at it, you will be provided an amazing view.

Huston proves the fact that everything truly is bigger in Texas.

Even though London’s skyline belongs to the most recognized skylines in the world, it only took 18th place on our list.

It includes well-known buildings such as the Palace of Westminster, Big Ben, and the London Eye.

Plus, there are buildings that are not so familiar to people but equally interesting such as Tower 42, the Gherkin, and the Pinnacle.

Tourists who have been to London a few times, always come back to see this skyline and never get tired of seeing it.

London’s skyline is a perfect combination of tall and not-so-tall buildings.

People who come to Central America are suggested to see the skyline in Panama City.

What makes the view amazing is that the city sits on the water and the reflection of the lights from the skyline takes the breath away.

The curved shape of the landscape gives it a view that a person will never forget.

You will be even more amazed if you see the skyline at night.

When you visit the City of Love, it is impossible not to see one of the most recognizable skylines in the world.

What people first notice about this skyline is that it is quite large, with tons of buildings.

Furthermore, the buildings are arranged in a unique and interesting way.

The best-known building of this skyline is the Eiffel Tower, but there are also lots of others that are not that famous but as bright and interesting.

The Christ the Redeemer statue is definitely the most recognizable part of Rio de Janeiro’s skyline.

However, we need to say that this is not the only reason this skyline is considered to be so amazing.

Its popularity is due to the outstanding mountains, the water, and the buildings that are so well lit.

What makes it stunning is the mixture of man-made architecture and that of Mother Nature.

Even for those who are not religious, the Christ the Redeemer statue something that will never be forgotten.

Even though the beautiful Golden Gate Bridge in San Francisco is something that you cannot forget once you see it, its skyline is equally amazing.

The skyline in San Francisco is so organized that the lights and tall buildings come in various designs.

Furthermore, to make things more stunning, the buildings reflect on the water.

The two most famous parts that make the Seattle skyline so unique are Mount Rainier and the ever-looming Space Needle Observation Tower.

Furthermore, the Seattle skyline has to offer skyscrapers and buildings of many different designs and sizes.

At night, visitors will get the best view ever.

Our suggestion is not only to recognize the Seattle skyline but to view it in person for a more amazing experience.

What makes this skyline distinctive from others is that it has tons of trees, giving it an even more beautiful look.

Shanghai is well known as the most populous city in the world, but it also boasts one of the most eye-catching skylines in the world.

People tend to notice that not all of the buildings are tall, but they are still breathtaking.

Actually, the designs and colors of these buildings make them amazing.

The most famous sights include the Oriental Pearl Tower and the Shanghai Tower.

Our suggestion is to visit Shangai if you want to see skylines with lots of colors and interesting architecture.

Taipei is the capital city of Taiwan which, of course, has a stunning skyline.

What visitors find as an interesting aspect of this skyline is the futuristic look.

The most well-known building is definitely the Taipei 101 Skyscraper, which was the tallest building in the world before the building of the Burj Khalifa in Dubai.

Singapore boasts a great skyline, even though it was created within certain limitations, due to the city planning rules.

The skyline is built with a height restriction of 280 meters for all buildings.

Still, it gives the city a style not found in other cities, being that it has mostly light-colored buildings.

All in all, Singapore is a definite highlight of the South East Asian region.

Frankfurt, Germany is the only city in Europe that boasts a skyline.

Actually, Europe is a continent with five structures that beat the 200-meter mark, and one of them si the unorthodox design of the Commerzbank Tower in Frankfurt.

This tower is internationally recognized for its use of ‘sky-gardens’ and environmentally friendly technologies.

The city boasts the 331-meter Europaturm observation tower or the Messeturm with its 257-meter pyramid peak.

These tall structures are so different from the ancient low-rise, high-density European architecture that can be found all over Frankfurt.

8. Kuala Lumpur, Malaysia – often known as one of the most beautiful skylines in the world

The skyline of Kuala Lumpur is often referred to as one of the most beautiful skylines in the world.

It boasts 10 buildings that are over 200 meters tall.

The most famous of them all is the distinctive Petronas Towers which are the world’s tallest twin buildings.

Plus, there is the 420 meter Menara Kuala Lumpur Tower.

When you take a closer look at Toronto’s architecture, you will be able to notice that it is a mix of periods and styles.

There are both buildings that date back to the mid-19th century as well as modern high buildings along the shoreline.

Some of the most famous buildings of Toronto’s skyline are the Royal Ontario Museum and the Art Gallery of Ontario that was designed by world-renowned architects.

You will be able to see 11 structures that are over 200 meters high.

The tallest of them is the 553.33 meter CN Tower that features the highest viewing deck.

Sydney’s skyline does not include only skyscrapers, but many other structures that make this city so attractive to tourists.

Of course, Centrepoint Tower, the MLC Centre, and the AMP Tower are buildings that reach the clouds, but what really takes the breath away is the world-famous harbor with its iconic Opera House and Harbour Bridge.

People come to Sydney so as to take a ferry on the shore of Sydney Harbour and enjoy the full view of this stunning skyline.

5. Dubai, United Arab Emirates – one of the biggest skylines in the world

Dubai boasts one of the biggest skylines in the world, being that this is a city of wealth and architectural accomplishment.

However, what visitors have noticed is that the recent growth of the city seems to be without any plan.

The city has 33 structures reaching over 200 meters which were built in the last 15 years.

But, these amazing buildings are not complementing each other.

Actually, it seems like they compete which one will be more beautiful.

The Burj Khalifa is definitely the world’s tallest building, being that it is 828 meters.

In the future, we can expect the city to provide more enormous buildings and the proposed Dubai City Tower is about to break all the records with a height of 2,400 meters.

Visitors cannot but notice the required flashing red lights on the top of every building of significant height.

Plus, there is a fleet of helicopters with the aim to avoid the heavy traffic of rush hour.

Many of the US cities are full of tall buildings, and we have already mentioned some of them.

But we cannot finish our list without mentioning another US city that boasts a skyline, and that is Chicago.

People consider it the birthplace of the modern skyscraper as the first steel high-rise was built here in 1885.

At that moment, nobody was able to predict whether this new design will survive.

There were no thoughts that it will reach such huge popularity.

Nowadays, Chicago has 19 buildings over 200 meters and some of the finest skyscrapers are the Trump Tower, John Hancock Tower, and the 1451 foot Willis Tower.

They are all along the shoreline of Lake Michigan and are a must-see sight for those coming to Chicago.

It is definitely the world’s most easily recognizable skyline being that it has been seen in numerous Hollywood films.

Some of the Hollywood blockbusters in which this skyline was captured are Spiderman, Home Alone 2 at Christmas, or Independence Day.

There are 47 buildings over 200 meters in New York.

Hong Kong deserves to be at the top of our list as it has 43 buildings measuring over 200 meters tall.

Even 30 of these buildings were built since the year 2000.

Among them, there are four of the 15 tallest buildings in the world.

Hong Kong definitely is a city that has the best skyline in the world.

A high population density of 6,943,600 people makes Hong Kong a major seaport, financial center, and the business hub of Asia.

The main reason why this city is considered to be so stunning is the mountain ranges that circle the city contrasting the amazing man-made structures.