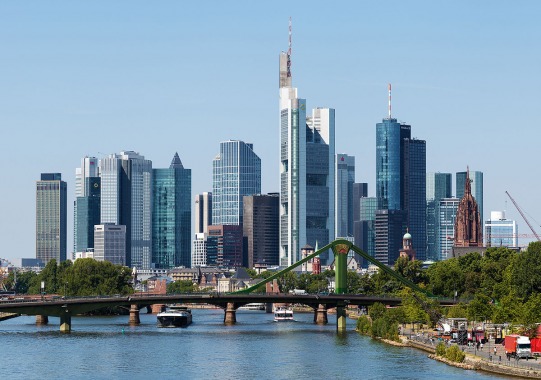 Frankfurt, officially Frankfurt am Main is the most populous city in the German state of Hesse. Its 763,380 inhabitants make it the fifth-most populous city in Germany. On the River Main (a tributary of the Rhine), it forms a continuous conurbation with Offenbach’s neighboring city am Main. Its urban area has a population of 2.3 million.

Frankfurt is a large hub with many transport and trade routes. The city is safe for travelers who follow common sense and local laws.

Public transport in Frankfurt is well developed, runs on time, and is reliable. Taxis are also safe, and there is no fraud with taxi drivers.

The risk of pickpocketing exists in public transport and tourist destinations. Keep track of your belongings, do not leave your phone unattended, keep important documents in the hotel's safe.

There is no threat of a serious natural disaster in Frankfurt. The only possible disaster is flooding, which can happen in the spring due to the snow melting or heavy rain.

The risk of serious robbery and armed attack in Frankfurt is shallow. Avoid communicating with suspicious individuals and not walking late at night in remote areas from the city center.

The risk of terrorism is low in Frankfurt. Of course, the risk of attacks still exists due to the international position of the city. The global risk of terrorist attacks in public areas exists worldwide, so tourists should be vigilant.

Fraud is rare in Frankfurt. However, due to many trade routes and relationships, petty scams can occur in this city. Keep an eye on your surroundings and only buy things and services from licensed locations.

Women traveling alone can feel quite safe in Frankfurt. The main thing is to adhere to the usual precautions and monitor your surroundings.

How Safe Is Frankfurt for Tourists?

Frankfurt is a safe city to travel to.

As a large conglomeration, it certainly attracts crooks and criminals.

However, there is almost no danger here for tourists if they use common sense.

The main problems are related to drug trafficking, assault, and vandalism.

Always keep an eye on your surroundings, be careful with those who ask or offer help.

These are often scammers.

It can be a little more dangerous in the city at night, especially in  ​​train stations and bars.

Don’t stay in bars for long.

Don’t get involved with drugs.

Remember that drugs are illegal in Frankfurt, and you can get severe punishment if you get involved with drugs.

Frankfurt’s impact on crime can be partly attributed to some statistical reasons: smuggling and similar crimes at the airport, as well as everything related to credit card fraud anywhere in Germany, is registered in Frankfurt since the main credit card clearing company is located in Frankfurt.

If you have a problem or are being harassed, contact the police for help.

The police work quickly and efficiently.

In turn, do not break local laws – strict rules and high fines will immediately be applied to you.

Do I Need a Visa to Visit Frankfurt?

Which Currency Is Used in Frankfurt?

The euro is the official currency in Germany. The euro is divided into 100 cents.

In Frankfurt am Main, the summers are comfortable, the winters are icy and windy, and it is partly cloudy year-round. The best time to visit is from June to September.

What Do I Need to Know about Airports in Frankfurt?

Frankfurt am Main Airport is a major international airport located in Frankfurt, the fifth-largest city of Germany and one of the world’s leading financial centers. It is operated by Fraport and serves as the main hub for Lufthansa, including Lufthansa CityLine and Lufthansa Cargo and Condor and AeroLogic.

What Are Some Things to Do in Frankfurt?

Frankfurt, a central German city on the river Main, is a major financial hub home to the European Central Bank. It’s the birthplace of famed writer Johann Wolfgang von Goethe, whose former home is now the Goethe House Museum. Like much of the city, it was damaged during World War II and later rebuilt. The reconstructed Altstadt (Old Town) is the site of Römerberg, a square that hosts an annual Christmas market.

Is the Water in Frankfurt Safe to Drink?

Tap water in Frankfurt am Main is safe to drink. But it is rather hard water and therefore not recommended that you drink the tap water here continuously.

Is Uber Safe in Frankfurt?

There is an Uber taxi in Frankfurt. You can call a taxi from the app on your phone. The cost of the trip will depend on the distance and time of day.