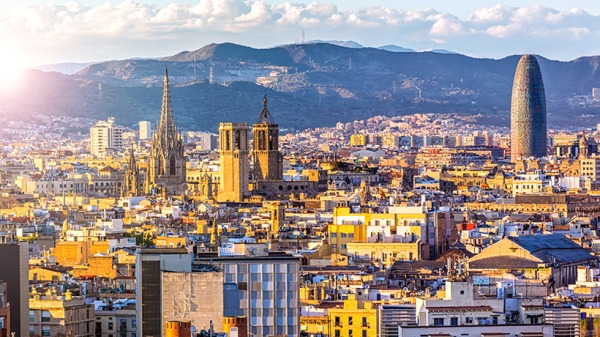 Barcelona is a city on the coast of northeastern Spain. It is the capital and largest city of the autonomous community of Catalonia and the second-most populous municipality of Spain. With a population of 1.6 million within city limits, its urban area extends to numerous neighboring municipalities within Barcelona’s Province. It is home to around 4.8 million people, making it the fifth most populous urban area in the European Union after Paris, the Ruhr area, Madrid, and Milan. It is one of the largest metropolises on the Mediterranean Sea.

Barcelona is generally a safe city to travel to. However, the city is known for its pickpocketing, and visiting tourists very often become pickpockets. You need to watch your belongings especially carefully.

Public transport is safe and reliable in Barcelona, as are taxi services. Make sure to use licensed taxi services. On the subway, you should beware of pickpockets and watch your belongings. It is better to take a taxi at night.

Barcelona is Europe's pickpocketing capital. Never keep your wallet, cash, or important documents in trouser pockets or bag pockets: a money belt is an easy and inexpensive way to prevent being robbed. Use an anti-theft backpack for your belongings.

Barcelona is not at risk of natural disasters. Tourists need not worry about this risk in the city.

The risk of serious burglaries and attacks is possible in Barcelona's suburbs and areas remote from the city center. It is recommended to use a taxi in such places and not to walk.

There have been terrorist attacks in Barcelona, and, as one of the most important cities in Europe, the risk of terrorism is high here. Study the political situation in the country before your trip here. Do not participate in political and social meetings and gatherings of people.

There is a popular in Barcelona scam that targets rental cars or those with foreign license plates. Scammers distract the driver and passengers by mentioning a flat tire. Sometimes, they are pedestrians crossing the street; other times, they are people on motorcycles, but they are almost always working in teams. Those in the car check to see if their tire is actually flat while someone reaches in to grab whatever they can.

Women traveling alone can feel completely safe in Barcelona. The main thing is to adhere to the usual precautions and monitor your surroundings. Do not leave your personal belongings unattended, and do not mess with the men whistling after you.

How Safe Is Barcelona for Tourists?

Barcelona is generally a safe city to travel to.

However, there are a lot of pickpockets and robberies here.

The city ranks first in the robberies of tourists among all European capitals.

When traveling here, you should take special precautions: carry things in an anti-theft backpack, carefully lock your hotel room and keep documents and jewelry in the hotel safe.

Carry only the minimum essentials and a minimum of cash with you.

Do not shine on the street with expensive devices and things; this attracts scammers.

Only park your car in a guarded parking lot and always lock your car when you leave.

There are cases when thieves have broken into cars for the trinkets inside, so never leave your belongings in the car.

Always remember about pickpockets, especially near attractions and on the subway.

The police work quickly and often catch up with them, but there are still many pickpockets, and their target is tourists.

Never leave your belongings unattended and on the beach when you go swimming.

In bars and restaurants, always check the bill and change.

Sometimes you may receive an invoice that you did not expect.

Do I Need a Visa to Visit Barcelona?

The Schengen Visa allows tourists to visit Spain and all the other countries in the Schengen Area for up to 90 days. If Spain is the main destination of a trip, travelers must apply for a visa at a Spanish embassy or consulate in their home country.

Which Currency Is Used in Barcelona?

The euro is the official currency in Spain. The euro is divided into 100 cents.

In Barcelona, the summers are short, warm, humid, and mostly clear, and the winters are long, cold, and partly cloudy. The best time to visit Barcelona is from May to June.

What Do I Need to Know about Airports in Barcelona?

What Are Some Things to Do in Barcelona?

Is the Water in Barcelona Safe to Drink?

The tap water in Barcelona is safe to drink.

Is Uber Safe in Barcelona?

There is no Uber taxi in Barcelona. You can use any other local taxi services.