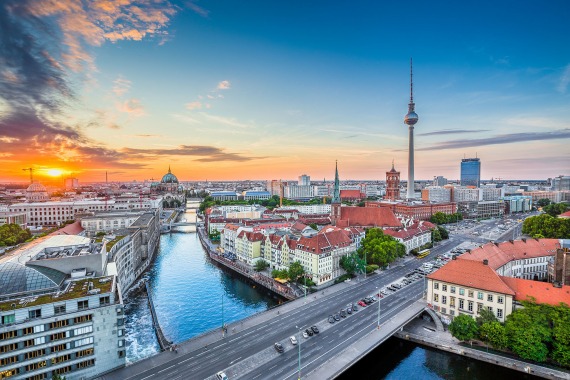 Berlin is the capital and largest city of Germany by both area and population. It is the most populous city of the European Union, according to the population within city limits. Due to its location in the European Plain, Berlin is influenced by a temperate seasonal climate. About one-third of the city’s area comprises forests, parks, gardens, rivers, canals, and lakes.

Berlin is a fairly safe city to travel to. If you follow common sense and keep an eye on your surroundings, you are unlikely to get into trouble. Be more careful at night.

Public transport in Berlin is well developed, runs on time and is reliable. Taxis are also safe, and there is no fraud with taxi drivers.

The risk of pickpocketing exists in public transport and tourist destinations. Bags and backpacks should be looked after and not left unattended.

There is no threat of a serious natural disaster in Berlin. The only possible disaster is flooding, which can happen in the spring due to the snow melting or heavy rain.

The risk of serious robbery and armed attacks is shallow in Berlin. There is little danger of these attacks in the suburbs. However, the likelihood that you will be attacked is minimal.

The risk of terrorism is low in Berlin. Of course, the risk of attacks still exists due to the international position of the city. The global risk of terrorist attacks in public areas exists worldwide, so tourists should be vigilant.

Fraud is rare in Berlin. However, due to many tourists and immigrants, petty fraud can occur in this city. Keep track of your surroundings and buy things and services only in licensed places.

Women traveling alone can feel quite safe in Berlin. The main thing is to adhere to the usual precautions and monitor your surroundings.

How Safe Is Berlin for Tourists?

Berlin is generally a safe city to travel with, with a crime rate ranging from low to medium.

The main problems are related to attacks, drug trafficking, and vandalism.

There are some less safe areas in Berlin, but usually, there is nothing for tourists to do there.

It is generally safe to walk around Berlin day and night. Pickpocketing occurs on public transport and in tourist areas.

Keep an eye on your bags during rush hour and at major train stations.

Pickpockets are not only a problem for tourists, but Berliners also suffer from their increasingly sophisticated tricks.

Please note that they are present not only on public roads or public transport but also in clubs or pubs.

In the vicinity of Neukölln and Kreuzberg (between Hermannplatz, Schönleinstrasse, and Kottbüsser Tor) and Wedding (Moabit and Gesundbrunnen), the risk of being robbed and attacked is somewhat higher.

Tourists should visit these areas with some caution at night, as the mix of drunken party-goers and low-income areas can get in trouble.

Care should be taken in the larger Alexanderplatz area as well.

Racial conflicts are rare, but they can happen.

Most often, they occur on the outskirts of East Berlin.

Do I Need a Visa to Visit Berlin?

Which Currency Is Used in Berlin?

The euro is the official currency in Germany. The euro is divided into 100 cents.

In Berlin, the summers are comfortable and partly cloudy, and the winters are long, very cold, windy, and mostly cloudy. The best time to visit is from June to September.

What Do I Need to Know about Airports in Berlin?

Berlin has two functioning destinations for air travel—that’s Tegel and Schönefeld, two ill-fitting sky harbors on opposite ends of town.

What Are Some Things to Do in Berlin?

Berlin, Germany’s capital, dates to the 13th century. Reminders of the city’s turbulent 20th-century history include its Holocaust memorial and the Berlin Wall’s graffitied remains. Divided during the Cold War, its 18th-century Brandenburg Gate has become a symbol of reunification. The city’s also known for its art scene and modern landmarks like the gold-colored, swoop-roofed Berliner Philharmonie, built-in 1963.

Is the Water in Berlin Safe to Drink?

The tap water in Berlin is safe. You can drink it from the tap.

Is Uber Safe in Berlin?

There is an Uber taxi in Berlin. You can call a taxi from the app on your phone. The cost of the trip will depend on the distance and time of day.