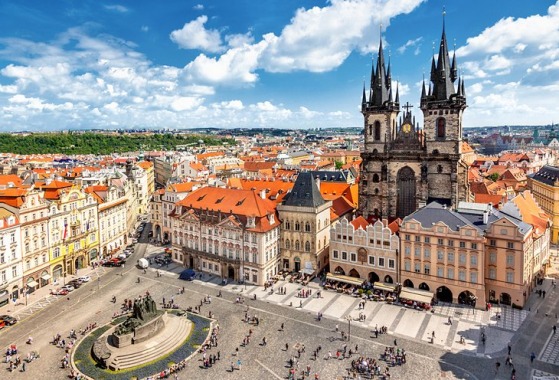 Czech Republic - safety as a country

Prague is the capital and largest city in the Czech Republic, the 13th largest city in the European Union, and Bohemia’s historical capital. Situated on the Vltava river, Prague is home to about 1.3 million people, while its metropolitan area is estimated to have a population of 2.7 million.

Prague is a safe city to visit. Usually, tourists here can only face petty fraud and pickpocketing. If you use common sense and keep track of your belongings, there will be no problems.

Public transport in Prague is well developed and runs in hours. However, pickpockets are often found in transport, so you need to look after your belongings carefully. Taxi is a reliable and safe form of transportation.

Prague is a popular tourist destination, so the city also attracts many pickpockets. Pickpocketing is common in markets, train stations, and tourist spots. Keep track of your belongings and surroundings. Don't carry a lot of cash with you.

There is a risk of flooding in Prague due to river flooding in spring, but this risk is not high. Explore the natural conditions in the city before your trip here.

The risk of serious robbery and armed attack in Prague is shallow. Avoid communicating with suspicious individuals and not walking late at night in remote areas from the city center.

The risk of terrorism is low in Prague. Of course, the risk of attacks still exists due to the international position of the city. The global risk of terrorist attacks in public areas exists worldwide, so tourists should be vigilant.

The most popular type of fraud in Prague is money exchange on the streets when you receive counterfeit banknotes. Be careful and change money only in banks.

Women traveling alone can feel quite safe in Prague. The main thing is to adhere to the usual precautions and monitor your surroundings.

How Safe Is Prague for Tourists?

Prague is a very safe city to travel to.

The most common crimes in Prague are undoubtedly car theft and pickpocketing.

Most often, these crimes are associated with drunk people, so avoid communicating with them.

Park your car in guarded parking lots and always lock your car when you leave.

Begging is a serious problem in this city, and you can even see beggars at the main tourist attractions in this city.

When walking around the city, carry things in an anti-theft backpack to avoid attempts to steal your personal belongings.

Prague annually attracts many tourists from all over the world, so pickpocketing is very common here.

Always keep track of your belongings and do not leave wallets and phones unattended.

Be astute on sleeper trains, as bag robberies are on the increase between major stations.

Ask for ID from anyone who asks to take your ticket or passport and lock backpacks to the luggage racks.

Keep valuables on you and maintain common sense.

Do not change money on the street – in unverified places, you may be offered counterfeit money.

Better to change money in banks.

Do I Need a Visa to Visit Prague?

Which Currency Is Used in Prague?

The city has a temperate oceanic climate, with relatively warm summers and chilly winters.

What Do I Need to Know about Airports in Prague?

What Are Some Things to Do in Prague?

Prague is bisected by the Vltava River. Nicknamed “the City of a Hundred Spires,” it’s known for its Old Town Square, the heart of its historic core, with colorful baroque buildings, Gothic churches, and the medieval Astronomical Clock, which gives an animated hourly show. Completed in 1402, the pedestrian Charles Bridge is lined with statues of Catholic saints.

Is the Water in Prague Safe to Drink?

Tap water is safe to drink in Prague, and you don’t need to buy bottled water at all.

Is Uber Safe in Prague?

There is an Uber taxi in Prague. You can call a taxi from the app on your phone. The cost of the trip will depend on the distance and time of day.