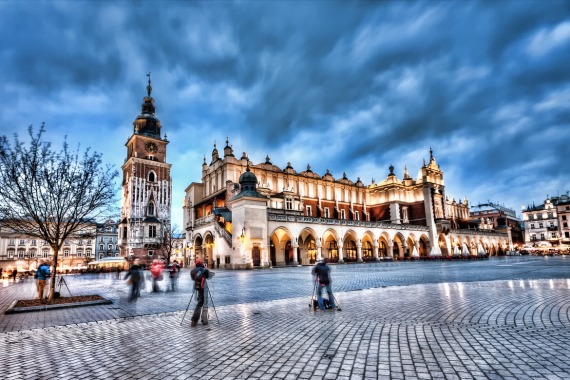 Kraków, written in English as Krakow and traditionally known as Cracow, is the second-largest and one of the oldest cities in Poland. Situated on the Vistula River in Lesser Poland Province, the city dates back to the 7th century. Kraków was Poland’s official capital until 1596 and has traditionally been one of the leading centers of Polish academic, economic, cultural, and artistic life. Cited as one of Europe’s most beautiful cities, its Old Town has declared the first UNESCO World Heritage Site in the world.

Krakow is very safe. Tourists should use common sense and keep an eye on their belongings and surroundings.

Public transport and taxis are reliable and safe. However, it is worth using only licensed taxi services, and in public transport, watch your pockets to avoid pickpocketing.

Pickpockets do happen but are not too common. Keep track of your belongings and your surroundings in tourist spots and on public transport.

In spring, Krakow is prone to flooding due to rivers' flooding, but this does not happen often. Study the weather conditions before your visit here.

The risk of serious robbery and armed attacks is shallow in Krakow. There is little danger of these attacks in the suburbs. However, the likelihood that you will be attacked is minimal.

There is an occasional scam with unlicensed taxis that can charge too much for the ride. Also, avoid participating in street lotteries and fundraising - most often, this is a scam.

Women traveling alone can feel quite safe in Krakow. The main thing is to adhere to the usual precautions and monitor your surroundings.

How Safe Is Krakow for Tourists?

Krakow is a fairly safe city to travel to.

There is many police in the city that protect the interests of tourists, making it safe to travel here at any time of the day.

Although pubs and clubs are safe, there can be fights in the surrounding streets, especially late at night.

Women and girls tend to be less vulnerable to assault or harassment, as the Polish code of conduct strictly prohibits violence (physical or verbal) against women.

Do not leave valuables visible in the car; do not expose money or expensive things in vain; know where you are going.

Be suspicious of strangers asking for money or trying to sell you something.

Pickpocketing happens quite often in tourist places and crowded places.

Keep track of your pockets and wear things in an anti-theft backpack.

When using a taxi, always ask for the price of the trip before leaving.

It was discovered that fraudulent taxis were running near the central train station.

In regular taxis, prices are limited by law, and the price list is easy to read.

Do I Need a Visa to Visit Krakow?

Which Currency Is Used in Krakow?

The złoty is the official currency and legal tender of Poland. It is subdivided into 100 grosz.

In Kraków, the summers are comfortable; the winters are freezing, dry, and windy; and it is partly cloudy year-round. The best times to visit Kraków are from March to May and between September and November. The weather is pleasant, and the summer’s throngs of tourists are nowhere to be found.

What Do I Need to Know about Airports in Krakow?

Kraków John Paul II International Airport is an international airport located near Kraków. It is located in Balice, 11 km west of the city center, in southern Poland.

What Are Some Things to Do in Krakow?

Kraków, a southern Poland city near the Czech Republic border, is known for its well-preserved medieval core and Jewish quarter. Its old town – ringed by Planty Park and remnants of the city’s medieval walls – is centered on the stately, expansive Rynek Glówny (market square). This plaza is the Cloth Hall site, a Renaissance-era trading outpost, and St. Mary’s Basilica, a 14th-century Gothic church.

Is the Water in Krakow Safe to Drink?

Is Uber Safe in Krakow?

There is an Uber taxi in Krakow. You can call a taxi from the app on your phone. The cost of the trip will depend on the distance and time of day.