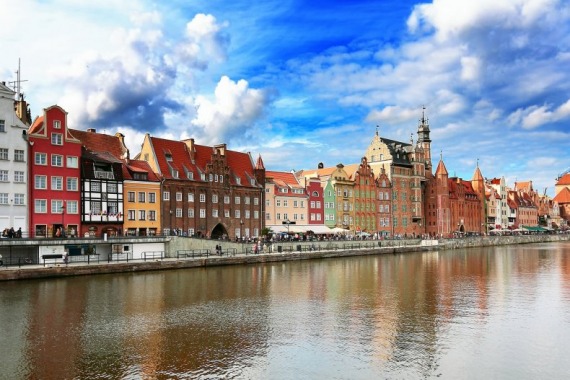 Gdańsk is a city on the Baltic coast of northern Poland. It is Poland’s principal seaport and the country’s fourth-largest metropolitan area. The city is at the southern edge of Gdańsk Bay, on the Baltic Sea. Gdańsk lies at the mouth of the Motława River, connected to the Leniwka, a branch in the delta of the nearby Vistula River, which drains 60 percent of Poland and connects Gdańsk with the Polish capital, Warsaw. Together with the nearby port of Gdynia, Gdańsk is also an industrial centre.

Gdansk is considered one of the safest cities in the region. The crime rate is low here. However, you should beware of the city's outskirts and watch your belongings, especially during the holidays.

Gdansk is not exposed to any serious risks of natural disasters.

The risk of serious robbery and armed attacks is very low in Gdansk. There is little danger of these attacks in the suburbs. However, the likelihood that you will be attacked is minimal.

Women traveling alone can feel quite safe in Gdansk. The main thing is to adhere to the usual precautions and monitor your surroundings.

How Safe Is Gdansk for Tourists?

Gdansk is a very safe city.

Usually in the city, tourists are in a safe position: the atmosphere here is very relaxed and calm.

As in any popular city, there are pickpockets here, so it’s better to keep track of your belongings.

Especially when you are visiting attractions and relaxing on the beach.

Do not leave your belongings unattended by anyone.

Be attentive to those who ask or offer you help – these can often be scammers.

Check change in cafes and restaurants.

In bars, do not accept drinks from strangers – these can be traps.

It is also better to use only licensed taxi services and ensure that the fare is known in advance.

Petty theft and theft are rare.

However, you shouldn’t relax and forget about your things.

Even a phone left on a table in a cafe can provoke a thief.

Follow common sense and behave in this city the same

Do I Need a Visa to Visit Gdansk?

Poland is in Schengen Area. The visa policy allows nationals of certain countries to enter the Schengen Area via air, land or sea without a visa for stays of up to 90 days within a 180-day period. A valid passport is a must.

Which Currency Is Used in Gdansk?

The złoty is the official currency and legal tender of Poland. It is subdivided into 100 grosz (gr).

In Gdańsk, the summers are comfortable and partly cloudy, and the winters are long, very cold, dry, windy, and mostly cloudy. The best time to travel to Gdańsk and visit these cities is between May and September.

What Do I Need to Know about Airports in Gdansk?

Gdansk Lech Walesa Airport is an international airport located in Gdansk, Poland, close to the urban centers of the Tricity agglomeration: Gdansk, Sopot, and Gdynia. The airport is named after Lech Walesa, the former president of Poland.

What Are Some Things to Do in Gdansk?

The city is full of museums, sights related to the history of Poland and the Second World War. Furthermore, as a seaport, Gdansk is attracted by the opportunity to go on a sea voyage or enjoy the local beaches.

Is the Water in Gdansk Safe to Drink?

Tap water is safe to drink.The city is full of museums, sights related to the history of Poland and the Second World War. As a seaport, Gadansk is attracted by the opportunity to go on a sea voyage or enjoy the local beaches.

Is Uber Safe in Gdansk?