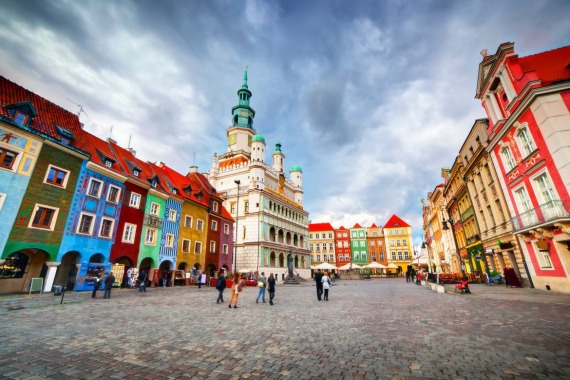 Poznan is a city in the central part of western Poland, on the Warta River, the administrative center and capital of the Greater Poland Voivodeship. The fifth most populous city in Poland. Large trade, industrial and educational center in the west of Poland. Machine building, food, rubber, perfumery, glass, and light industries are developed.

Poznan is щne of the safe cities in the region. The crime rate is low here. However, you should beware of the city's outskirts and watch your belongings, especially during the holidays.

Poznan is not exposed to any serious risks of natural disasters.

The risk of serious robbery and armed attack in Poznan is very low. Avoid communicating with suspicious individuals and do not walk late at night in areas remote from the city center.

Women traveling alone can feel quite safe in Poznan. The main thing is to adhere to the usual precautions and monitor your surroundings.

How Safe Is Poznan for Tourists?

Poznan is a fairly safe city to travel.

Tourists usually do not encounter any serious accidents here.

Poznan is generally a safe city with the same crime rate as nearby towns.

However, it is important to remember that sometimes there are racial clashes and intolerance is still possible.

As in any city, keep common sense and adhere to general safety rules.

Don’t settle for free drinks if you get them from strangers.

Often in a bar, this can be a ruse to poison and rob you.

This is a tourist attractive city and many travelers come here, which is associated with a large number of scammers and pickpockets that may be here.

There are several types of scams, such as credit card scams and street vendors who offer pictures of a bird or a monkey and then charge money for it.

In case of a dispute, contact the local police – they usually work very quickly and help tourists.

Otherwise, use common sense and behave here as in your hometown.

Do I Need a Visa to Visit Poznan?

Poland is in Schengen Area. The visa policy allows nationals of certain countries to enter the Schengen Area via air, land or sea without a visa for stays of up to 90 days within a 180-day period. A valid passport is a must.

Which Currency Is Used in Poznan?

The złoty is the official currency and legal tender of Poland. It is subdivided into 100 grosz (gr).

In Poznań, the summers are comfortable and partly cloudy, and the winters are long, very cold, dry, windy, and mostly cloudy. Therefore, the best time to travel to Poznań and visit these cities is between May and September.

What Do I Need to Know about Airports in Poznan?

Poznan-авawica Airport is one of the oldest airports in Poland, located near Poznan. It is located 5 kilometers west of the city center. The airport carries out local, international and commercial flights. The northern part of the airport from 1913 until December 23, 2009 was used as a military airfield.

What Are Some Things to Do in Poznan?

Poznan is a city on the Warta River in western Poland. It is famous for its universities and the historical center, where Renaissance buildings were erected on Stary Rynok Square. The Poznań Town Hall houses the Historical Museum, where you can get acquainted with the history of the city. At noon, on the clock of the town hall, two mechanical goats collide with their foreheads. On the island of Tumski stands the Cathedral of Saints Peter and Paul, an example of the Baroque and Gothic styles.

Is the Water in Poznan Safe to Drink?

Is Uber Safe in Poznan?