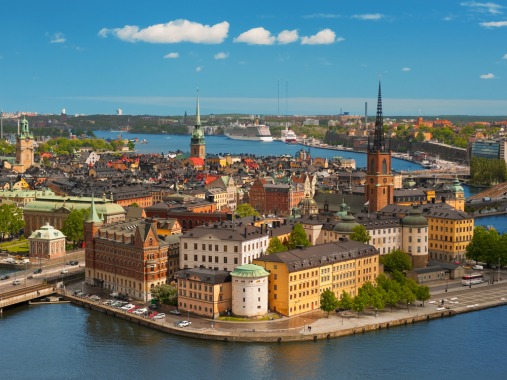 Sweden - safety as a country

Stockholm is the capital of Sweden. It has the most populous urban area in Sweden as well as in Scandinavia. 1 million people live in the municipality, approximately 1.6 million in the urban area, and 2.4 million in the metropolitan area. The city stretches across fourteen islands where Lake Mälaren flows into the Baltic Sea.

Stockholm is a modern and safe city. Most risks can be avoided with common sense. Don't get drunk in bars and watch your belongings.

Public transport is reliable and safe in Stockholm. Keep track of your pockets and bags on buses. Taxis are a safe way to travel; however, the price can be quite high.

Pickpocketing is possible in tourist and crowded places. Keep track of your wallets. Carry things in your anti-theft backpack and don't carry a lot of cash with you.

There are almost no risks of natural disasters in Stockholm, but if you are traveling here in winter, you will need warm clothing and additional precautions, as winter is harsh in these parts.

The risk of serious robbery and armed attacks is shallow in Stockholm. There is little danger of these attacks in the suburbs. However, the likelihood that you will be attacked is minimal.

The risk of terrorism is low in Stockholm. Of course, the risk of attacks still exists due to the international position of the city. The global risk of terrorist attacks in public areas exists worldwide, so tourists should be vigilant.

Most of the scams in this city involve street vendors trying to sell souvenirs to tourists at inflated prices. Be vigilant and double-check everything.

Women traveling alone can feel quite safe in Stockholm. The main thing is to adhere to the usual precautions and monitor your surroundings.

How Safe Is Stockholm for Tourists?

Stockholm is a very safe city to travel to.

The main problems are associated with petty theft, vandalism, and drug use.

As in any big city in Stockholm, it is best to avoid walking alone late at night.

Attacks are rare but can still happen.

Stockholm has a vibrant nightlife.

Be careful not to get involved in drunken fights.

Do not leave valuables in the car; keep an eye on your bag in crowded places and the train station area.

Keep track of your belongings in crowded places such as festivals, nightclubs, markets, airports, and public transport.

Better not to carry a lot of cash with you.

Most of the risks in this city can be avoided by following common sense.

Do not leave valuables in the car when you leave.

There are known cases of breaking into a car for the sake of profit inside the car.

If you are riding a bike, always park it with a padlock. Bicycle theft is common in Stockholm.

Stockholm is a very developed and modern city, most of the risks here can be avoided quite easily.

The police presence is large enough that you can complain to the nearest police station in case of an attack.

Do I Need a Visa to Visit Stockholm?

Which Currency Is Used in Stockholm?

The krona is the official currency of Sweden. One krona is subdivided into 100 öre.

The best time to visit Stockholm is in the summer. In Stockholm, the summers are comfortable and partly cloudy, and the winters are long, freezing, dry, and mostly cloudy.

What Do I Need to Know about Airports in Stockholm?

Stockholm Arlanda Airport is an international airport located in the Sigtuna Municipality of Sweden, near Märsta, 37 kilometers north of Stockholm and nearly 40 kilometers south-east of Uppsala. The airport is located within Stockholm County and the province of Uppland.

What Are Some Things to Do in Stockholm?

Stockholm, the capital of Sweden, encompasses 14 islands and more than 50 bridges on an extensive Baltic Sea archipelago. The cobblestone streets and ochre-colored buildings of Gamla Stan (the old town) are home to the 13th-century Storkyrkan Cathedral, the Kungliga Slottet Royal Palace, and the Nobel Museum, which focuses on the Nobel Prize. Ferries and sightseeing boats shuttle passengers between the islands.

Is the Water in Stockholm Safe to Drink?

Stockholm has some of the purest water in the world in its taps. It has way better quality than bottled water, so yes, it’s completely safe to drink.

Is Uber Safe in Stockholm?