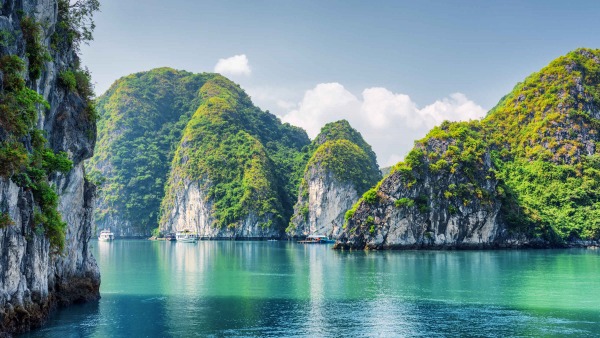 Vietnam - safety as a country

Hạ Long is the capital city and 1st-class provincial city of Quảng Ninh Province, Vietnam. The name Hạ Long means “descending dragon.” The city was created in 1993, when the old capital, Hòn Gai, was merged with Bãi Cháy – the main tourist area.

Halong is a safe place to visit. Use your usual common sense when walking around the area. Don't carry a lot of cash and jewelry with you. Otherwise, the city is safe as in most places in the world.

In Ha Long, it is customary to ride motorcycles or cars. If you have rented them, park only in guarded parking lots. Use only licensed taxi services and do not take the car from the street.

In Halong, bags or phones are often snatched at intersections. Keep track of your belongings in these places. Pickpocketing is possible in tourist spots and bazaars.

This place is at risk of typhoons, especially between May and January. Study the weather conditions before your visit here.

The risk of serious robbery and armed attacks is shallow in Halong. There is little danger of these attacks in the suburbs. However, the likelihood that you will be attacked is minimal.

Women traveling alone can feel quite safe here. The main thing is to adhere to the usual precautions and monitor your surroundings.

How Safe Is Halong for Tourists?

Halong is a developed and popular city among tourists.

This is a fairly safe place to travel.

Usually, only petty theft and pickpocketing can happen here.

At the same time, outside the city, on the outskirts and suburbs, it can be a little more dangerous than in the city itself.

Another disadvantage is not very good roads in the city.

Sometimes there is simply no asphalt pavement.

If you are traveling in your own car, it is better to take a guide or driver.

If you have rented a motorcycle, then always park it in a guarded parking lot – motor vehicle thefts often happen.

At intersections, keep your bags and phones with you – it often happens that thieves on mopeds passing by can simply snatch your bag or phone from your hands.

In bars and restaurants, be suspicious of those who offer you free drinks and watch your glass.

It is not uncommon for tourists to be drunk with opiate in order to rob them later.

Avoid buying spirits from street vendors as they may not be genuine, and be aware that drugs in Vietnam can contain toxic ingredients and are potentially life-threatening.

Do I Need a Visa to Visit Halong?

Visitors to Vietnam must obtain a visa from one of the Vietnamese diplomatic missions unless they come from visa-exempt countries or countries eligible for electronic visas. A valid passport is a must.

Which Currency Is Used in Halong?

Halong Bay has a tropical hot climate, with two very different weather patterns: hot and wet in the summer months and dry and cool in the winter. September – November, and March-May are ideal for a trip to Halong.

What Do I Need to Know about Airports in Halong?

Van Don International Airport or Ha Long Airport is an airport in Vân Đồn District, Quảng Ninh Province, Vietnam. It is located about 50 km away from Hạ Long.

What Are Some Things to Do in Halong?

Halong is located in the northeastern part of Vietnam and is known for its emerald waters and thousands of limestone islands covered with tropical forests. Here you can go for a ride on junks or kayaks and see the islands that have received names from their shape, for example, Choda (Stone Dog). The region, especially Katba National Park, is popular with snorkeling, rock climbing, and hiking enthusiasts.

Is the Water in Halong Safe to Drink?

Tap water is not drinkable here. You should buy bottled water or boil tap water.

Is Uber Safe in Halong?

There is no Uber taxi in Halong. You can use any other local taxi services.