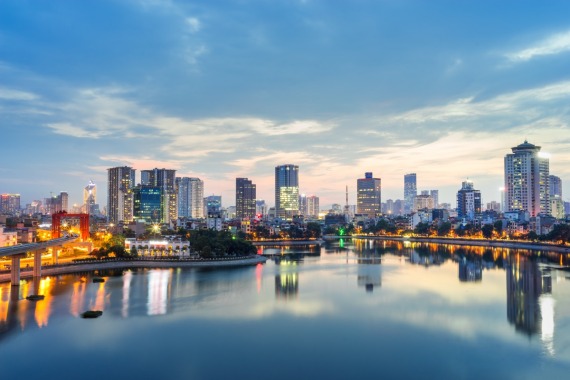 Vietnam - safety as a country

Hanoi is the capital city of Vietnam. It covers an area of 3,358.6 km2. The second-largest city in Vietnam consists of 12 urban districts, 1 district-leveled town, and 17 rural districts. Located within the Red River Delta, Hanoi is the cultural and political center of Vietnam.

Hanoi is a relatively safe city to travel to. To not get into trouble here, it is enough to use common sense and watch your things.

Public transport is well developed and safe. Keep an eye on your wallets on buses to avoid pickpocketing. Use only licensed taxi services. At times, you may experience clutter due to a large number of people and traffic.

Pickpocketing happens here just like everywhere else - in the area of train stations, in the main squares, and in places where tourists gather. Always keep track of your belongings, do not leave your wallet and phone unattended.

Hanoi is prone to earthquakes, floods, and typhoons. Study the weather conditions before your visit here.

The risk of serious robbery and armed attack in Hanoi is shallow. Avoid communicating with suspicious individuals and not walking late at night in remote areas from the city center.

Women traveling alone can feel quite safe in Hanoi. The main thing is to adhere to the usual precautions and monitor your surroundings. Sometimes excited shouts towards women and whistling are possible. Just try to walk past such men.

How Safe Is Hanoi for Tourists?

Hanoi is a very safe city to travel to.

At the same time, the level of corruption and bribery remains high here.

And petty theft is possible.

In Hanoi, it is important to remember that road traffic can be dangerous, so you need to be especially careful when crossing the street.

Petty crimes do happen occasionally and usually take the form of stealing your valuables in public or on the road.

Do not leave bags and wallets unattended.

Research the reliable points of sale of goods and services carefully before your trip here and involve the police if the merchant tries to deceive you.

When you cross the road and step to the side of the road, look not only in both directions, but also to the left, right, back, and forth, and take each step slowly and patiently, allowing them to pass, because even eye contact is not enough with approaching drivers and in fact to as you will notice, someone is also standing on your back, because in Vietnam there is no such thing as one-way traffic.

If you explore Hanoi by motorcycle, be extremely careful when passing stopped taxis, expect the unexpected, such as a taxi door suddenly swinging open.

Do I Need a Visa to Visit Hanoi?

Visitors to Vietnam must obtain a visa from one of the Vietnamese diplomatic missions unless they come from visa-exempt countries or countries eligible for electronic visas. However, owing to the COVID-19 pandemic in Vietnam, no new visitors can obtain visas to enter the country.

Which Currency Is Used in Hanoi?

The đồng has been the currency of Vietnam since May 3, 1978. The State Bank of Vietnam issues it. The đồng was also the currency of the predecessor states of North Vietnam and South Vietnam, having replaced the previously used French Indochinese piastre.

In Hanoi, the wet season is hot, oppressive, and overcast, and the dry season is comfortable, humid, and mostly clear. Autumn (around September to November) and Spring (March and April) are the two best seasons to visit Hanoi.

What Do I Need to Know about Airports in Hanoi?

What Are Some Things to Do in Hanoi?

Hanoi, the capital of Vietnam, is known for its centuries-old architecture and a rich culture with Southeast Asian, Chinese and French influences. At its heart is the chaotic Old Quarter, where the narrow streets are roughly arranged by trade. There are many little temples, including Bach Ma, honoring a legendary horse, plus Đồng Xuân Market, selling household goods and street food.

Is the Water in Hanoi Safe to Drink?

Is Uber Safe in Hanoi?

There is no Uber taxi in Hanoi. You can use any other local taxi services.