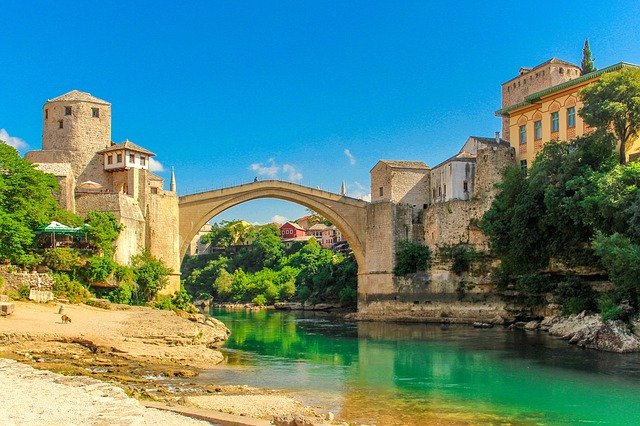 Bosnia and Herzegovina : Safety by City

Bosnia and Herzegovina, otherwise known as BiH, is located on the Balkan, in Southeastern Europe.

It is a beautiful country once destroyed by the civil war.

It is a country of difficult and painful history and wonderful people willing to be kind, even to strangers.

The war that destroyed this country was described in many movies, maybe the most famous being “In the land of Blood and Honey”.

Today, this is a peaceful country with many nice to see and do.

The locals put the ugly times behind.

When in Bosnia, explore Sarajevo, the capital, there you will find lots of small shops and a mix of history and modern era.

Warnings & Dangers in Bosnia and Herzegovina

Bosnia and Herzegovina is a very safe country for tourists. The people are open to friendships and most people have a great time there. However, some caution is still necessary, especially in Sarajevo. Small towns have a very low crime rate.

The public transport is generally safe in Bosnia and Herzegovina. However, make sure not to leave your things in the bus compartments since that may ease the job for thieves to steal things from you. Keep an eye on your belongings.

Pickpocketing occurs in Bosnia and Herzegovina as anywhere else where lots of tourists gather. Make sure you keep your personal belongings close to you at all times. Don't leave them unattended.

Bosnia and Herzegovina is susceptible to droughts, earthquakes, landslide, and floods. The country is especially at risk for river basin flooding and extreme precipitation. In case something like this happens during your stay, follow the security protocol.

Mugging rarely occurs and the tourists are not targeted in any way. These types of incidents usually happen among the locals. Just to be on the safe side, don't go alone at night to the remote areas of the town.

Bosnia and Herzegovina is on the 91st place on GTI (Global Terrorism Index) and it is a country with very low risk of terrorist attacks. There were a few incidents identified as terrorist attacks, but it is not likely they will occur again. However, some precaution is still necessary.

One of the biggest scams is begging in the street. Even though there are people who don't have a choice because they lost everything, most of the beggars are scammers who use their kids to collect money from strangers. Avoid them.

Solo female travelers can go to Bosnia and Herzegovina as it is very safe for women. Take some general precautions as you would in your home town and you should not have any problems. People are mostly very kind and friendly.

How Safe Is Bosnia and Herzegovina for Tourists?

Bosnia and Herzegovina is generally a very safe country for tourists.

It is a peaceful country with lots of things to see.

There are many bars, clubs, and cafes where people can dance, chat or have some traditional coffee.

The life in Sarajevo is a little different than in other parts of the country since the capital has a little bit more urban vibe.

While exploring, make sure you take some general precautions.

Other than that, be careful when taking a taxi.

Taxi drivers may try to charge you more than necessary because tourists who don’t know the local currency very well are easy targets.

Count the money twice and arrange the price in advance.

Besides, it is important to stress that you must be careful when crossing the street because drivers usually don’t stop, they expect the pedestrian to wait.

Also, when going out of town, make sure not to go off the paved road, because there are lots of landmines left from the war and some of the signs were washed off over the years by the floods.

Stay on the road and you will be fine.

Do I Need a Visa to Visit Bosnia and Herzegovina?

Most citizens do not need a visa for entering Bosnia and Herzegovina, but it is better to check the visa status before making arrangements.

Passport must be valid at least 3 months after the planned stay.

Which Currency Is Used in Bosnia and Herzegovina?

The official currency in BiH is Bosnia and Herzegovina convertible mark.

The symbol is KM.

You can exchange money in various exchange offices.

The climate is mostly continental with very cold winters and hot days during summer.

There is one small part where the country has a very small coast only 7km long.

The climate there is Mediterranean.

What Do I Need to Know about Airports in Bosnia and Herzegovina?

There are four international airports in Bosnia and Herzegovina.

The biggest one is the Sarajevo International Airport.

It serves more than one million passengers a year.

It is located 12 km away from Sarajevo downtown.

Travel insurance is recommended no matter how short your stay may be.

General insurance will save you from potential troubles in case something unpredictable happens.

Coverage for medical expenses is necessary.

What Are Some Things to Do in Bosnia and Herzegovina?

When in Bosnia, you must go and see The Old Bridge of Mostar.

It is a landmark of Bosnia.

It was destroyed during the war but reconstructed later on.

It is a place for the official annual bridge jumping competition that occurs every year.

Is the Water in Bosnia and Herzegovina Safe to Drink?

Tap water is safe for drinking in Bosnia and Herzegovina.

However, if there are heavy rains, make sure to switch to bottled water, because the excess rain may pollute the drinking water.

Is Uber Safe in Bosnia and Herzegovina?

There is no Uber in Bosnia.

However, there are local taxies that you can choose from.

The drivers are friendly and helpful, so you will probably learn a lot along the way.