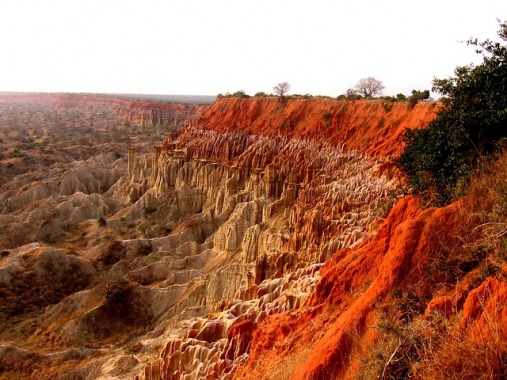 Angola is a poor country devasted by the 27 years of civil war.

It is located on the Atlantic coast between the Republic of Congo and Namibia.

However, despite the troubles they’ve been through, these people are warm and welcoming, always cheerful and trowing parties.

It is definitely worth the visit, but it does not come without the risk.

This is not a country for people who are in search of a peaceful place where they can let their minds wander.

Music is divine and the food tasty, but with the scammers everywhere, you should not let your guard down.

Angola is a beautiful country with many nice things to see. However, being very cautious is advised. Arrange tours only with trusted guides recommended by the hotel you are staying in. Avoid walking alone during nighttime and try to lay low, so you don't attract too much attention.

Traffic is not very organized and since there are no traffic lights it can become quite chaotic. Bus drivers are often unlicensed and ignore signals. Numerous cars are outdated, so they can break down on the road which often leads to crowded roads.

Pickpocketing risk is high in Angola, especially in Luanda. Locals often snatch bags of tourists and there is a high risk of these incidents turning violent in cases when the criminal is armed. Be very careful not to attract attention with expensive items.

The biggest risk of natural disasters in Angola comes from floods. There have been cases of floods in the past when many people lost their lives. In case you find yourself in Angola when one occurs, make sure you follow the emergency protocol.

Locals often steal things such as mobile phones, credit cards, money or other valuable items. It can occur at any time of day and night. Withdrawing money is especially risky since these are the occasions when armed robberies may occur.

The risk of terrorist attacks is very low in Angola. The Front for the Liberation of the Enclave of Cabinda is the only group that has initiated attacks around the country, but in recent years that has almost diminished.

Scams risk is mainly associated with credit card frauds, which is why tourists are advised to carry cash and not use their cards while in the country. Be very careful with your luggage and valuable possessions, don't show anything pricey and keep them well hidden.

The risk for female travelers is medium. Travel in groups if possible and go only with the guides recommended by your hotel. Go to the city center to feel the very essence of this country, but be careful along the way.

How Safe Is Angola for Tourists?

During the daytime, Angola is pretty safe, but you must still follow general recommendations to keep yourself protected.

Avoid going alone during evening and night, especially further from the city center as this is the opportunity when you might get yourself in trouble.

Carry cash with you to avoid being robbed at the ATM or risk to get your credit card cloned.

Generally, these types of incidents happen among the locals, but tourists can be targeted in cases when you make yourself vulnerable – like falling asleep in public places or leaving belongings unattended.

Walking down the Serpentine road is very risky since there were cases of rapes and attacks, especially in local clubs and bars where alcohol makes it easier to be mugged or scammed.

Since there is a high risk of getting sick from various tropical diseases, make sure you only drink clean water and consume food only in restaurants where you see that sanitary conditions are met.

Even though the beauties of this country may delight you, never stop being alert, it may come at a high price.

Always pay attention to your belongings even in cases when you might think someone is in trouble – that is often a way to get you distracted.

Do I Need a Visa to Visit Angola?

The process can be done online.

You must have a passport with at least nine months of validity and 2 blank pages in the passport.

Which Currency Is Used in Angola?

The official currency in Angola is Angolan kwanza.

The currency symbol is Kz.

It is recommended to bring cash since there were cases reported of cloned credit cards.

The climate in Angola is sub-tropical and it has a dry and cool period from May to August known also as Cacimbo.

The average temperature you can expect goes around 20°C.

What Do I Need to Know about Airports in Angola?

There are 243 airports in total in Angola.

The biggest one is the Quatro de Fevereiro International Airport.

It is located in Luanda, the capital of Angola.

Almost 2 million passengers a year go through this airport.

Before you go to Angola, make sure you get travel insurance that covers medical expenses but also expenses in case of theft or emergencies.

It is necessary to be fully vaccinated before you go since there is a high risk for many tropical diseases.

What Are Some Things to Do in Angola?

Luanda is a very attractive city full of interesting things to see, but it is very expensive, so be ready to spend some money if you want to have fun.

Don’t miss out on visiting Saint Michael Fortress while you’re there – you will get to see part of Angola’s history.

Is the Water in Angola Safe to Drink?

Tap water is not safe for drinking.

Don’t use ice for drinks.

It is advised to use bottled water even for brushing teeth.

Is Uber Safe in Angola?

Uber is not available in Angola, but there are a few pretty good alternatives such as Kubinga and Allo Taxi.

Make sure you get the approximate offer, so you can plan your expenses.