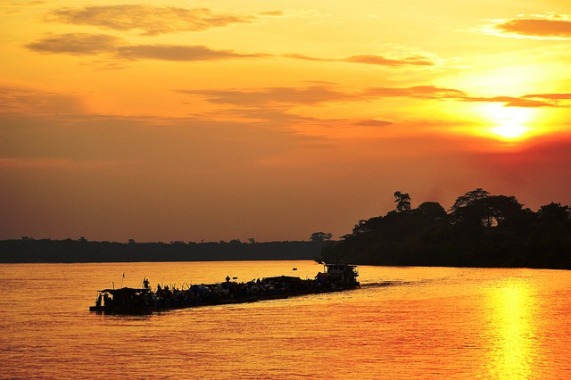 The Democratic Republic of the Congo, known also as DRC or Congo, is located in Central Africa.

It is a country where you will be amazed by nature, colorful birds and literature lovers will probably think immediately about the novel “Heart of Darkness” by Joseph Conrad that describes the journey down the Congo River.

It is a place where you can see sanctuary for bonobos, species similar to chimpanzees, called Lola Ya Bonobo.

Virunga National Park is something you shouldn’t miss.

This beautiful country is not trouble-free making it a little bit hard for tourists.

Warnings & Dangers in Democratic Republic of the Congo

There are some parts of Congo that shouldn't be visited by tourists due to the high risk of violence such as Ituri and North Kivu, as well as Eastern Congo. Armed conflicts, petty crime, kidnapping, and Ebola are some of the risks.

Public transport is not reliable and safe in Congo. The usual means of transportation are trucks that usually carry goods. Taxies are available near the hotels, but in most cases, they don't meet safety standards. It is very hard to travel through Congo.

Pickpocketing risk is very high in Congo. Tourists are strongly discouraged from visiting this country, but in case you go despite the warnings, make sure you remain alert all the time and keep your belongings close to you at all times.

Congo is very susceptible to earthquakes, droughts, flooding, and volcanic eruptions. Among the most active volcanos in the world, two are located in Congo. Over the last 17 years, volcanic eruptions caused the destruction of 80% of the local economy.

Mugging and all sorts of armed crimes are possible in every moment of day and night, so extreme caution is advised. Do not go anywhere when it gets dark and try not to attract attention by carrying expensive things with you.

Terrorist attacks are extremely likely to occur in the Democratic Republic of the Congo due to the armed forces everywhere. Be extremely vigilant at all times, be aware of your surroundings and make sure you follow all the recommended security protocols issued by the government.

Make sure you stay alert during your entire stay in Congo since the scam rate is high. Be careful if someone tries to distract you or involve you in some business schemes. Trust your gut and find a way out of every shady situation.

Congo is not a place for female tourists and they are strongly discouraged from going. Unless you do go, make sure you take all the necessary precautions to protect yourself. Never leave your things unattended and do not go anywhere alone at night.

How Safe Is Democratic Republic of the Congo for Tourists?

The political situation in Congo is very unstable and the people are poor and in danger daily.

Tourists are discouraged from visiting Congo unless it is absolutely necessary.

The transport is not reliable, armed groups are likely to carry out all sorts of attacks.

If you decide to go despite the continuous warnings make sure you stay out of the most dangerous parts of Congo.

Be very careful every step of the way.

Local guides know where is dangerous to go and will have advice on how to take good care of yourself.

The motive behind it is money, so make sure you don’t show your expensive things in public.

Try not to attract negative attention.

If you find yourself in this situation, make sure you cooperate, because it can easily escalate.

If you notice a large gathering in public, make sure you stay away because these are potentially dangerous situations where force can be used by the police.

There have been cases of arrests and unfortunately in some instances even casualties.

Stay vigilant at all times and protect yourself as much as possible during the entire stay.

Do I Need a Visa to Visit Democratic Republic of the Congo?

All tourists who intend to visit Congo must have a visa.

It cannot be received upon arrival, it has to be requested in advance in the embassy.

The passport must be valid.

Which Currency Is Used in Democratic Republic of the Congo?

The official currency in Congo is Congolese franc.

The symbol is FC.

American dollars are accepted everywhere and there are ATMs where tourists can withdraw money.

How's the Weather like in Democratic Republic of the Congo?

The climate in Congo is equatorial in the north part of the country, meaning that it is humid and pretty hot during the entire year.

The center and south have a tropical climate.

What Do I Need to Know about Airports in Democratic Republic of the Congo?

Congo has 60 airports in total.

The busiest and the biggest one is Kinshasa International Airport.

It is located in Kinshasa and it handles around one million passengers per year.

Travel insurance is highly recommended to all the tourists who wish to visit Congo no matter how long the trip may last.

Make sure you get the coverage that includes medical expenses.

What Are Some Things to Do in Democratic Republic of the Congo?

When in Congo, make sure to go on a Gorilla Safari that lasts three days.

It is a perfect opportunity to get familiar with the dynamics of the gorilla family.

Is the Water in Democratic Republic of the Congo Safe to Drink?

Nearly half of the population in Congo doesn’t have access to clean drinking water.

Check with the locals about water safety and drink bottled water to be on the safe side.

Is Uber Safe in Democratic Republic of the Congo?

There is no Uber in Congo, but there are two local taxi companies that operate on a similar level.

They are called Blue Congo and Comfort Car.

They do not have an app but are safe and reliable.