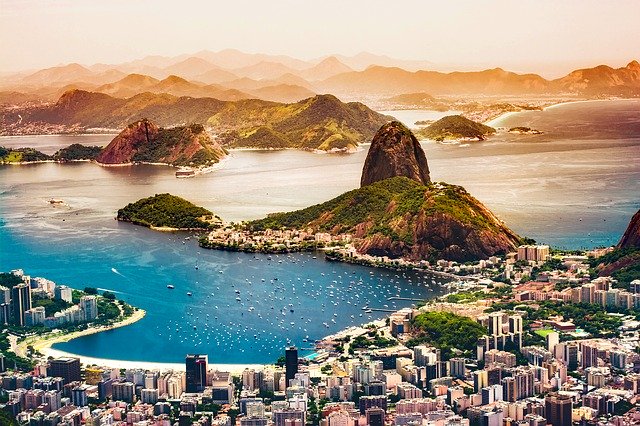 Brazil, officially – the Federative Republic of Brazil is a country located in South and Latin America.

It is the fifth country in the world by the number of people living in it.

Famous for samba and the amazing Brazil Carnival, it attracts millions of tourists every year.

There are Iguazu Falls for people who which to see this amazing place protected by UNESCO.

Surfers can go to Florianópolis Beaches.

Cathedral of Brasília is a unique cathedral that can’t be seen anywhere else.

With the rich nightlife, Brazil definitely has everything that a tourist may need.

It is worth the visit for sure!

Brazil has a certain degree of street crime and even though most tourists have a great experience here, caution is advised. Make sure not to carry too much money with you or attract attention by wearing jewelry. Stay alert at all times.

It is not recommended to hail a cab on the streets of Brazil. It is better to have your hotel arrange one for you. The public transport is safe, but it is necessary to stay alert because of the potential pickpocketing.

Pickpocketing usually occurs in metro and bus terminals. Avoid crowded places as much as possible and be careful not to get distracted, since that is usually the tactics used by the thieves. Always keep your things close to you.

Brazil is susceptible to landslides, floods, excess rainfall and droughts. In 2011, there were numerous floods that took the lives of 903 people. The material damage was enormous as well. In case you find yourself in Brazil during floods, follow the safety procedure.

Mugging can occur, especially in Sao Paolo. There have been cases of kidnapping when the tourist gets forced to withdraw money and hand it over in exchange for freedom. Be careful and don't go to the remote areas at night.

There were no terrorist attacks in the recent past, but still, some caution is advised. Make sure to follow the security protocol in case something like this happens. Avoid political and religious gatherings in order to avoid any potential risk.

Scams are possible in tourist places. It is highly recommended to be careful when withdrawing money on the ATMs, particularly at night. Make sure not to get distracted, since groups may create various distraction plans, so they can take your money.

Brazil is fairly safe for women. Most tourists won't have any issues, however, special caution is advised. There have been cases of rape and even though these do not occur frequently, still make sure you don't walk alone at night.

How Safe Is Brazil for Tourists?

Brazil’s crime rate is high and things such as carjacking, armed robberies, pickpocketing, and assault occur.

Hiding your money in the money belt and leaving the most important things in the hotel safe is advised.

This particularly applies to the days during the Carnival.

Thieves may use the chance when the tourists get distracted to grab the bag and run.

If you plan to visit Favelas, make sure you go with a trusted guide.

Don’t go there alone because it can be dangerous.

Carrying your camera or smartphone is not advised, especially in crowded places.

When withdrawing money, it is very important to be careful and don’t get distracted because that may be the time when the thieves may grab your money.

“Helpful” strangers are usually scammers who wish to take advantage of the situation.

Make sure to stay careful and protect your health as well by getting the necessary vaccines, because there is a risk of getting the Yellow Fever, the Dengue fever, Malaria, and the Zika virus.

There have been cases of crocodile and shark attacks, so be careful when you go swimming.

Keep yourself informed about the possible dangers.

Do I Need a Visa to Visit Brazil?

Tourists do not need a visa for a stay that is shorter than 90 days.

The passport must be valid at least six months after the planned stay in Brazil.

Which Currency Is Used in Brazil?

The official currency is Brazilian real.

Its symbol is R$.

Always bring cash with you because sometimes cards get declined.

Brazil has 4 seasons, but it mostly has a dry and wet season during the year.

Tourists mostly visit Brazil from December up until March.

During the summer, the average temperature in Brazil goes around 40°C.

What Do I Need to Know about Airports in Brazil?

Brazil has 760 airports – such an impressive number!

The biggest one is Guarulhos International Airport.

It is located in Sao Paolo.

It serves more than 42 million passengers a year.

Travel insurance is necessary no matter how long you plan to stay.

Always take coverage for medical expenses, theft, lost luggage, and the cancelation, in case you can’t make it.

What Are Some Things to Do in Brazil?

The most famous things about Brazil are the Carnival of Brazil and Christ the Redeemer.

The Carnival is a huge party with colorful costumes, beautiful women and music.

It is certainly something everyone should experience at least once in a lifetime.

Is the Water in Brazil Safe to Drink?

Tap water is safe in some areas, but the taste, caused by the treatment process, is not good.

It is better to consume bottled water, either still or carbonated, whatever you prefer.

Is Uber Safe in Brazil?

There is Uber in Brazil, but there are various stories about issues that the passengers faced while in the car.

It is better to take a local taxi since they are rated as much better.