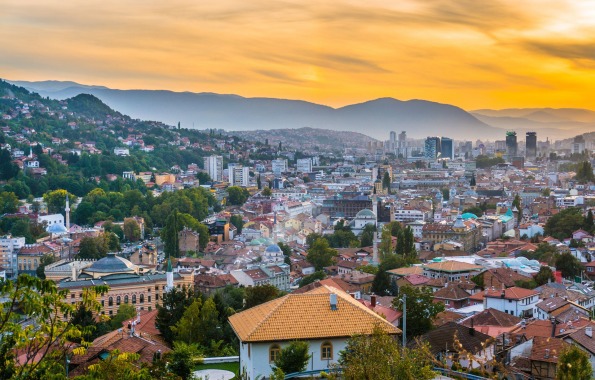 Bosnia and Herzegovina : Safety by City

Bosnia and Herzegovina - safety as a country

Sarajevo is the capital and largest city of Bosnia and Herzegovina. Located within the greater Sarajevo valley of Bosnia, it is surrounded by the Dinaric Alps and situated along the Miljacka River in the Balkans, a region of Southern Europe.

In general, Sarajevo is a fairly safe city to travel to, but you should use common sense, watch your belongings and your surroundings.

Pickpocketing occurs in Milan at every turn, so wear an anti-theft backpack, look after your belongings, and don't leave your phones and wallets unattended. In crowded places, keep an eye on your surroundings.

Sarajevo is at risk of flooding. In the history of the city, there have already been serious destructions associated with this. Check the weather conditions before your trip here.

The risk of serious robbery and armed attack in Sarajevo is shallow. Avoid communicating with suspicious individuals and do not walk late at night in areas remote from the city center.

Women traveling alone can feel quite safe in Sarajevo. The main thing is to adhere to the usual precautions and monitor your surroundings.

How Safe Is Sarajevo for Tourists?

Sarajevo is a relatively safe city to travel to.

The main problems are associated with petty theft, vandalism, and corruption.

Usually, there are no particular problems for travelers when visiting Sarajevo.

It should be remembered that there are still minefields and unexploded ordnance in the vicinity of the city.

Uncleared areas are marked with yellow tape or signs, but still, not all minefields have been identified.

If you are talking to locals, avoid topics about politics.

They can be controversial.

There are a lot of pickpockets in public transport and tourist places.

Use common sense (for example, keep valuables in the inner pockets of your jacket/coat) as in any big city, and you must be safe.

If you are traveling in your car, always park in guarded parking lots and do not leave anything valuable inside the car.

If beggars or gypsies come up to you, it is better to avoid communicating with them, do not engage in conversation, and try to leave.

Do I Need a Visa to Visit Sarajevo?

Which Currency Is Used in Sarajevo?

In Sarajevo, the summers are warm and mostly clear, and the winters are icy and partly cloudy. The best months for good weather in Sarajevo are July, August, and September.

What Do I Need to Know about Airports in Sarajevo?

Sarajevo International Airport, also known as Butmir Airport, is the main international airport of Bosnia and Herzegovina, located 6 km southwest of the railway station of the capital Sarajevo in the suburb of Butmir.

What Are Some Things to Do in Sarajevo?

Sarajevo is the capital of Bosnia and Herzegovina, a small city on the Miljacka River, surrounded by the Dinaric Mountains. There are several local history museums in the city center, including the Sarajevo 1878–1918 Museum, where you can get acquainted with the history of the assassination of the Austrian Archduke Franz Ferdinand in 1914, which became the reason for the outbreak of the First World War. In the old district of Bascarsija, there is a mosque of Gazi Khusrev-bey from the Ottoman Empire.

Is the Water in Sarajevo Safe to Drink?

Is Uber Safe in Sarajevo?

There is no Uber taxi in Sarajevo. You can use any other local taxi services.