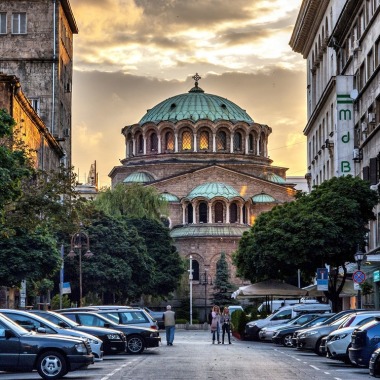 Bulgaria - safety as a country

Sofia is the capital and largest city of Bulgaria. It is situated in the eponymous valley at the foot of the Vitosha Mountain in the country’s western parts. The city is built west of the Iskar river and has many mineral springs, such as the Sofia Central Mineral Baths. It has a humid continental climate. Being in the Balkans center, it is midway between the Black Sea and the Adriatic Sea and closest to the Aegean Sea.

Sofia is a safe city for travel. Use common sense to avoid any problems here. It would help if you were especially careful at night.

Public transport is well-developed and accessible for movement. Beware of pickpockets. Taxi is a reliable way to travel, use only licensed taxi services.

The risk of pickpocketing is quite high in public transport and tourist destinations. However, if you keep an eye on your surroundings and don't leave your bags unattended, you have nothing to fear.

Bulgaria's potential natural disasters are earthquakes and avalanches in the mountains, but they are not often. Even if they happen, they do not usually cause any major damage.

Serious robberies and attacks are rare in Sofia. Usually in remote areas of the city and rarely touches tourists. Avoid these areas and stay safe.

Sofia is not at risk of terrorist attacks. However, because it is located in Europe and here there are terrorist attacks, they are possible in Bulgaria's capital. Follow the country's political news closely.

Most often, fraud in Sofia is because taxi drivers and other service providers try to charge higher fees from tourists. Be careful and double-check everything.

Women traveling alone can feel quite safe in Sofia. The main thing is to adhere to the usual precautions and monitor your surroundings.

How Safe Is Sofia for Tourists?

In Sofia, crime is below average, and you can generally travel here without any problems.

The main crimes are related to petty theft and vandalism.

There are big problems with bribery and corruption.

Sofia is a fairly safe city compared to most major cities in the US and Europe.

Use common sense and avoid conflicts with locals and dark alleys and parks at night.

If you are traveling by your own car, it is recommended to leave it in a paid guarded parking lot.

Parking in the city center is difficult; Although vacant seats can be found, the Bulgarian police usually harshly with foreign license plates.

Even if other cars appear to be parked legally, double-check for prohibition signs or markings.

Some of them exchange money at lower rates than indicated on the exchange rate panel.

Never exchange currency on the street!

Sofia has a big problem with stray dogs.

Although most of them do not bother passers-by, there have been attacks on people in certain neighborhoods lately.

It is best to avoid paths near abandoned buildings or dark alleys in parks, as stray dogs are likely to be found.

In the unlikely event of an attack or bite, call 112 immediately and visit the nearest hospital, as these dogs can carry disease.

Do I Need a Visa to Visit Sofia?

Certain countries do not need a visa to stay less than 90 days in Bulgaria. Those are U.S., Australian, European and Canadian visitors. The Bulgarian Ministry of Foreign Affairs can give you all the information regarding visas.

Which Currency Is Used in Sofia?

The lev is the currency of Bulgaria. The lev is divided into 100 stotinki. Stotinka in Bulgarian means “a hundredth” and, in fact, is a translation of the French term “centime.”

In Sofia, the summers are warm and mostly clear, and the winters are very cold, dry, and partly cloudy. The best time to visit Bulgaria is during the shoulder months from April – May, and September – October, as the weather will be pleasant, and the prices will be lower.

What Do I Need to Know about Airports in Sofia?

The main international airport of Bulgaria, Sofia Airport, is 10 km away from the center of Sofia and it is at the same time the busiest and the largest one. Some other airports less busy than the one in Sofia are Burgas Airport, Varna Airport, and Plovdiv Airport.

What Are Some Things to Do in Sofia?

Sofia is the capital of Bulgaria, located in the west of the country at the Vitosha mountain range. The history of the city has more than two thousand years, during which it was conquered by the Greeks, Romans, and Ottomans. Frescoes from the 13th century have been preserved in the medieval Boyana Church. The rotunda of St. George, built by the Romans in the 4th century, has preserved Turkish decor from the 10th century.

Is the Water in Sofia Safe to Drink?

Tap water is safe to drink all over the country but not always pleasant in taste or appearance.

Is Uber Safe in Sofia?

There is no Uber taxi in Bulgaria. You can use any other taxi service.