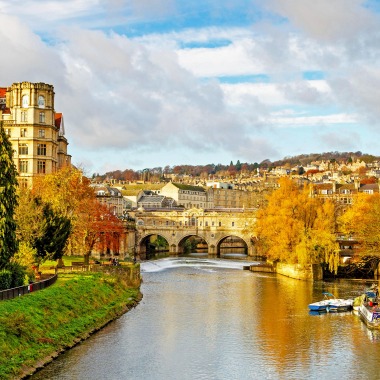 Bath is the largest city in the county of Somerset, England, known for and named after its Roman-built baths. In 2011, the population was 88,859. Bath is in the valley of the River Avon 156 km west of London and 18 km southeast of Bristol. The city became a World Heritage site in 1987 and was later added to the transnational World Heritage site known as the “Great Spa Towns of Europe” in 2021.

Bath is considered one of the safest cities in the region. The crime rate is low here. You should beware of the outskirts of the city and watch your belongings, especially during the holidays.

Pickpocketing is not common, but since Bath is a popular tourist destination, this kind of thing happens here. Keep track of your belongings, do not leave your phone unattended, keep important documents in the hotel's safe.

The risk of serious robbery and armed attacks is very low in Bath. There is little danger of these attacks in the suburbs. However, the likelihood that you will be attacked is very small.

The risk of terrorism is low in Bath. Of course, the risk of attacks still exists due to the international position of the city. The global risk of terrorist attacks in public areas exists worldwide, so tourists should be vigilant.

Women traveling alone can feel quite safe in Bath. The main thing is to adhere to the usual precautions and monitor your surroundings.

How Safe Is Bath for Tourists?

Bath is a very safe city to travel to.

The main problems are associated with petty theft and drug trafficking.

There are many tourists and students here, which is why the atmosphere in the city is quite friendly.

Bath’s city center is vibrant and noisy until late Friday and Saturday evenings, although getting out into the street late at night can get tricky.

A common problem for tourists is the occasional group of homeless beggars around the parks and the abbey – you can see them drinking lager and shouting insults, which might surprise many newcomers.

However, they are not persistent when asking for money and argue among themselves rather than involve passers-by.

Swimming in a local river can be quite dangerous.

Therefore, be on the alert.

Worley Dam is a recommended spot for “wild swimming” in summer.

Popular with locals and students alike, it is approximately 3 miles along the canal towards Bradford-upon-Avon.

Overall, Bath is a very safe place to visit and you shouldn’t feel any threat.

While in the city, keep an eye on your bags and do not leave them unattended and do not let strangers “look after” them.

Stay on main roads and well-lit areas at night, and understandably try to avoid parks and forests at night.

Do I Need a Visa to Visit Bath?

Which Currency Is Used in Bath?

In Bath, the summers are comfortable and partly cloudy, and the winters are long, very cold, windy, and mostly cloudy. The best time to visit Bath is early June through the end of September.

What Do I Need to Know about Airports in Bath?

Bristol Airport is just 32 km from Bath, making it the city’s closest airport. It currently serves over 100 destinations worldwide.

What Are Some Things to Do in Bath?

Bath is a city in the southwestern part of England, located in a hilly area. It is home to famous thermal springs as well as 18th century Georgian buildings. Many houses were built at that time from yellow “Bath stone”, such as, for example, Bath Abbey. It is famous for its fan vaults, a tower and large stained glass windows. At the site where the Roman baths were discovered, there is the Roman Baths Museum. It houses the Main Pool, sculptures, a temple and much more.

Is the Water in Bath Safe to Drink?

Bath’s tap water is safe to drink (in fact, for centuries, the city built an entire economy on people doing just that).

Is Uber Safe in Bath?