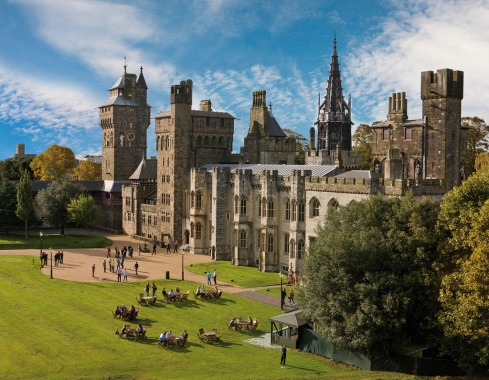 Cardiff is the largest city and capital of Wales. It is a unitary administrative unit with city status, which was obtained in 1905 thanks to the explosive growth of the industry in the region and the use of Cardiff as the main port for transporting coal from Wales. In 1955, the city has declared the capital of Wales.

Cardiff is considered one of the safest cities in the region. The crime rate is low here. You should beware of the outskirts of the city and watch your belongings, especially during the holidays.

Like any major city in Cardiff, pickpockets do happen. Especially on public transport during rush hour. Keep track of your belongings, and do not leave bags and wallets unattended on the tables in the cafe.

Cardiff is not exposed to any serious risks of natural disasters.

The risk of serious robbery and armed attacks is very low in Cardiff. There is little danger of these attacks in the suburbs. However, the likelihood that you will be attacked is very small.

The most common types of fraud in Cardiff are related to cybercrimes: sending SMS and emails from fraudsters in order to find out your data and your credit card details. Usually, tourists do not face this problem, but in any case, remember that it is not safe to share your personal data with third parties.

Women traveling alone can feel quite safe in Cardiff. The main thing is to adhere to the usual precautions and monitor your surroundings.

How Safe Is Cardiff for Tourists?

Cardiff is a fairly safe city to travel to.

The main problems are related to vandalism, drugs, and assault.

Cardiff is safer than most other major cities in the UK.

In most places, you need common sense to get out of trouble.

Keep track of your belongings, and don’t leave your bags unattended.

Do not trust those who ask or offer you help – they may be scammers.

The Ocean Way area, adjacent to the magical roundabout, is recommended to be avoided at night and in the early evenings of winter, as the area is known for prostitution.

The Riverside, Llanramni, Plasnevidd, Splott, and Tremorph areas may be more dangerous as there are many homeless people and beggars.

To the east of the city are Llanramni, Trowbridge and St Mellons, all former municipal housing estates.

This part of the city is indeed home to some of the most socially disadvantaged and low-income families, which is why some areas do face many of the same problems that plague social deprivation.

It is better to avoid these areas and settle in the more expensive and affluent neighborhoods.

This price will pay off.

Do I Need a Visa to Visit Cardiff?

Which Currency Is Used in Cardiff?

In Cardiff, the summers are comfortable and partly cloudy and the winters are long, very cold, wet, windy, and mostly cloudy. The best time to visit Cardiff is early June through late September.

What Do I Need to Know about Airports in Cardiff?

Cardiff Airport is the busiest airport in Wales. It has been under the ownership of the Welsh Government since March 2013, operating at an arm’s length as a commercial business.

What Are Some Things to Do in Cardiff?

Cardiff is a port city on the south coast of Wales at the confluence of the Tuf River at the mouth of the Severn. In 1955, the city was proclaimed the capital of the country. The completely redesigned Cardiff Bay area houses the Welsh Millennium Center, home to opera concerts, national orchestra, theater and dance performances, and Mermaid Wharf, famous for its shopping. The state-of-the-art Cenedd building, designed by architect Richard Rogers, is the seat of the National Assembly for Wales.

Is the Water in Cardiff Safe to Drink?

Is Uber Safe in Cardiff?