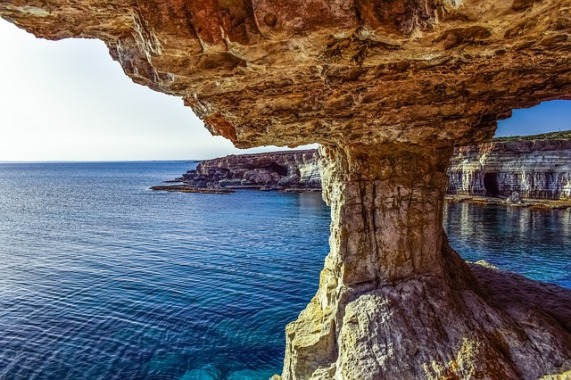 Cyprus, or officially – the Republic of Cyprus, is located in the Eastern Mediterranean.

It is known by the warm weather, crystal clear water and many archeological sights where history lovers can learn something new about Cyprus.

When in Cyprus make sure you visit Salamis, the archeological finding with the remainings of the ancient kingdom, and Thombs of the Kings.

The nightlife in Cyprus is very diverse, so if you like to go dancing and have a drink or two, this is the place for you.

Cyprus is known for its extraordinary parties, so you won’t be disappointed for sure.

Pickpocketing is generally the issue in the tourist places, so be prepared and protect yourself by leaving valuables at home or in a hotel's safety deposit box. Don't carry expensive items with you and leave the original passport in the hotel.

The transport system is pretty reliable in Cyprus. The tourists can explore the island by bus, taxi or by a car. Remember that the drivers drive on the left side on the road in Cyprus if you decide to rent a car.

Pickpocketing is an issue almost in all tourist areas, including Cyprus. Make sure you always keep an eye on your valuables and don't attract the attention of thieves by carrying expensive items such as a camera or an iPhone. Stay alert.

Cyprus is susceptible to forest fires, earthquakes, floods, droughts, rainstorms, and landslides. Keep in mind that you need to stay informed during your stay in Cyprus so you can react in a timely manner in case anything like this happens.

Mugging is rare, but it can happen in some areas of the island. Be vigilant at all times and make sure you cooperate in case something like this happens so you don't put yourself in even greater danger. Don't walk alone at night.

The common scam is performed by taxi drivers when they take the longer route or tell you a price, but fail to tell you the currency so they can charge more. In order to protect yourself, arrange for a price in advance.

Female travelers shouldn't have any problems in Cyprus, but taking some precaution is advised. Make sure you don't leave your things unattended or wander alone at night along the remote dark alleys. Stay alert all the time and everything should be all right.

How Safe Is Cyprus for Tourists?

Even though Cyprus is a pretty safe country with a very low rate of violent crimes, the tourists are advised to stay alert in order to avoid problems.

Locals say that there is no need to lock the door either on homes or cars, but leaving your things in plain sight is not quite recommended.

The risk of pickpocketing is always present in the tourist areas, so make sure you keep your bag close to you.

Either use a hotel’s safe deposit box or take turns with a friend for keeping things on the beach.

When taking a taxi, make sure you take the one that has a meter or arrange for a price so you avoid paying too much for a ride.

Turn the navigation on your phone so you can see if the driver drives the recommended route or is trying to prolong the ride so he can take more from you.

Tourists are easy targets because they don’t know the route well enough.

Luckily, smartphones have made it easier.

When you wish to smoke a cigar, be careful where you buy it, because in lots of places locals sell low-quality cigars.

All in all, most tourists have a great time in Cyprus, just make sure you stay alert.

Do I Need a Visa to Visit Cyprus?

The citizens from Australia, the EU, Canada, the United States, and Britain do not need a visa for a stay in Cyprus shorter than 90 days.

The passport must be valid at least six months after the planned stay.

Which Currency Is Used in Cyprus?

The official currency in Cyprus is the Euro.

Most shops will also accept UK pounds and American dollars in Cyprus.

Cyprus has a Mediterranean climate.

The summers are dry and long, while the winters are mild.

Autumn and spring are short.

The average temperature varies, but it can go up to 40°C.

What Do I Need to Know about Airports in Cyprus?

Cyprus has 4 public airports in total.

The biggest one is the Larnaca International Airport.

It is located 4km away from Larnaca.

It serves more than 10 million passengers per year.

Having travel insurance is highly recommended for all the tourists no matter how long the planned stay will be.

Unpredicted things happen and to protect yourself from additional expenses, take basic coverage.

What Are Some Things to Do in Cyprus?

There are even ten diving sites, making Cyprus the paradise for adventurous tourists who love diving.

Is the Water in Cyprus Safe to Drink?

Even though the tap water is safe for drinking in Cyprus, it may cause stomach upset since it is hard.

Tourists can opt for drinking bottled water instead to be on the safe side.

Is Uber Safe in Cyprus?

There is no Uber in Cyprus, but there are local taxies that you can choose from.

However, they may be expensive, so the cheapest option is to rent a car.