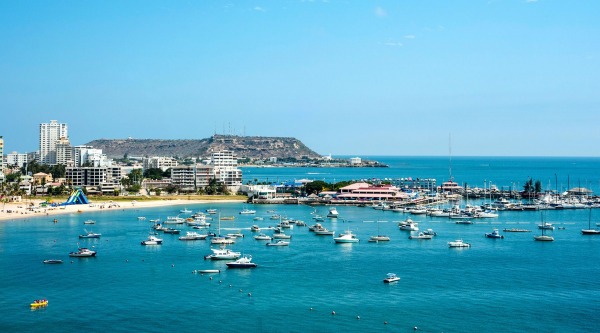 Manta, full name – San Pablo de Manta – the largest city in the province of Manabi and the fifth most populous city in Ecuador. Economically, Manta is the third most important city in Ecuador.

Manta is a poor city, and there are many petty thefts, pickpockets, and robberies. Tourists in this city are advised to be vigilant and not leave their belongings unattended.

Public transport in Manta is well-developed, but not always safe. Pickpockets are often used in buses. Taxis are reliable and safe if you use a licensed service.

Pickpocketing is the most common problem in Manta. It is necessary to keep things in a well-guarded place. Wear anti-theft backpacks. Be vigilant when standing at intersections - it is not uncommon for criminals to snatch bags from the victim's hands right on the street, driving a moped.

Ecuador is situated in an area of intense seismic activity. There is a high risk of earthquakes, volcanic eruptions, and tsunamis. Study the current hazard level from these risks and take appropriate measures before your trip.

Armed robberies and attacks also happen here. Be vigilant, do not walk around the city late at night; do not carry a lot of cash and jewelry with you.

There are no cases of terrorism in Ecuador's history, but it cannot be ruled out due to its proximity to Colombia. There is unrest in the city from time to time, so stay away from political rallies and crowds to avoid being attacked.

Manta's most common scams are currency exchange with fake money and the sale of non-existent tours and excursions around the country. Be careful and buy all goods and services only in licensed places.

Women can travel to Manta safely if they adhere to the rules: do not go out at night, do not go to bars alone, avoid socializing with local men, wear modest clothes, and do not draw attention to themselves with their behavior.

How Safe Is Manta for Tourists?

In Manta, the crime rate is average.

It is safe to travel here if you follow certain precautions.

The city experiences a lot of robberies and attacks and a high level of corruption and bribery.

If you find yourself in trouble, don’t count on the police – they usually turn a blind eye to all incidents.

In areas remote from the city center, you should be especially careful. It is better not to walk there in the dark.

Taxis are inexpensive, so it is better to travel by taxi than on foot for your safety.

Travelers to Manta will be greeted by scammers or people with “tearful stories”.

Ignore such people and beware of those who ask for money under any pretext, including children begging.

Pickpocketing is carried out by highly skilled teams of 3-4 people.

Better not to take your wallet with you at all – just a few bills split between different pockets.

Always keep an eye on your belongings, and leave valuable devices and jewelry in the hotel safe.

A lot of pickpocketing occurs in the area of ​​bus stations.

It would be best if you kept a close eye on your bags before and during departure, at least once on the bus.

Do not leave drinks unattended in bars and restaurants, especially at night.

Thieves working in tandem are known to be friendly, gaining your trust, then “slip you a mickey” (add drugs to the drink) and rob you.

Do I Need a Visa to Visit Manta?

Most visitors to Ecuador can enter the country without a visa. Visitors may stay up to 90 days, except citizens of Peru, who are allowed a maximum stay of 180 days, and citizens of China who are allowed to stay for 90 days per the calendar year. A valid passport is a must.

Which Currency Is Used in Manta?

The present currency of Ecuador is the United States dollar. The United States dollar has a sign: $ and a code: USD. One dollar is divided into 100 cents.Most visitors to Ecuador can enter the country without a visa. Visitors may stay up to 90 days, except citizens of Peru, who are allowed a maximum stay of 180 days, and citizens of China who are allowed to stay for 90 days per the calendar year. A valid passport is a must.

In Manta, the wet season is overcast, the dry season is windy and partly cloudy, and it is warm and oppressive year-round. The best times to visit Manta for ideal weather are mid-August to December.

What Do I Need to Know about Airports in Manta?

Eloy Alfaro International Airport is a combination of the civilian airport and military airbase on the Pacific coast near Manta, a city in the Manabí Province of Ecuador. It is the fourth-busiest airport in Ecuador. The airport is located 5 km from the city center.

What Are Some Things to Do in Manta?

The city hosts an annual international theater festival in September, celebrates Carnaval in style, and welcomes international cruise ships year-round. Ecuadorians flock to Manta’s beaches on weekends and holidays, especially during the local school vacation from mid-December through March.

Is the Water in Manta Safe to Drink?

The tap water in Manta, Ecuador, is not safe to drink. It’s better to boil it or buy bottled water.

Is Uber Safe in Manta?

There are Uber taxis in this city. You can call it from the app on your smartphone. The cost will depend on the time of day and the duration of the trip.