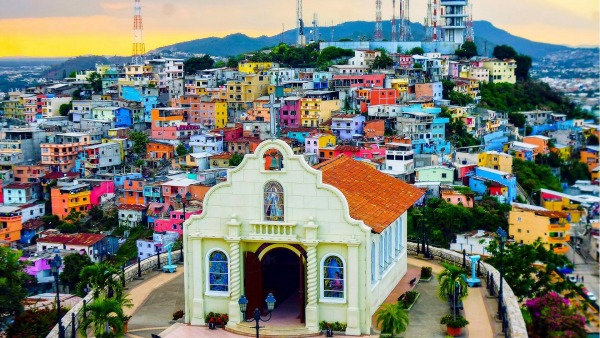 Guayaquil or Santiago de Guayaquil is the first-most populous city in Ecuador, located approximately 250 kilometers southwest of the capital of the country Quito on the Guayas River, the center of the province of Guayas

Guayaquil is a poor city, and there are a lot of petty thefts, pickpockets and robberies. Tourists in this city are advised to be vigilant and not leave their belongings unattended.

Public transport is not safe. It can also run off schedule and be late. Use a taxi to get around the city, especially at night. Make sure to use licensed taxi services.

Pickpocketing is the most common problem in the city. It is necessary to keep things in a well-guarded place. Wear anti-theft backpacks. Be vigilant when standing at intersections - it is not uncommon for criminals to snatch bags from the victim's hands right on the street, driving a moped.

Ecuador is located in an area of intense seismic activity. There is a high risk of earthquakes, volcanic eruptions, and tsunamis. Before your trip here, study the current hazard level from these risks and take appropriate measures.

Armed robberies and attacks also happen here. Be vigilant, do not walk around the city late at night; do not carry a lot of cash and jewelry with you.

There are no cases of terrorism in Ecuador's history, but it cannot be ruled out due to its proximity to Colombia. There is unrest in the city from time to time, so stay away from political rallies and crowds to avoid being attacked.

Guayaquil's most common scams are currency exchange with fake money and the sale of non-existent tours and excursions around the country. Be careful and buy all goods and services only in licensed places.

Women are not recommended to travel to Guayaquil alone. The city can be safe during the day, but at night you better not show on the streets. Besides, local men may show you unwanted increased attention.

How Safe Is Guayaquil for Tourists?

Guayaquil is not the safest city to travel to.

The main problems are related to theft, assault, drug trafficking, and vandalism.

Tourists are advised to take special precautions to protect themselves from harm.

Ecuador is a rather poor country, and poverty is the reason for many crimes here.

Thefts happen even for the sake of small gain.

Do not expect to get your lost item back.

The police usually turn a blind eye to such thefts.

Pickpocketing, theft of wallets, mobile phones, and theft from vehicles are very common in Guayaquil.

If you have a watch on your left hand and put that hand out the window while you are in traffic, it can be taken off the street.

Travelers should always keep all valuables locked in hotel safes.

Leave your credit card at home in the hotel safe, not in your room.

Be vigilant and know your surroundings to protect yourself and know the numbers of local hospitals and embassies in case of more serious problems.

When traveling at night, it is not advised to walk around on the streets, even in groups.

Keep your car doors locked at all times and windows rolled up.

Do I Need a Visa to Visit Guayaquil?

Most visitors to Ecuador can enter the country without a visa. Visitors may stay up to 90 days, except citizens of Peru, who are allowed a maximum stay of 180 days, and citizens of China who are allowed to stay for 90 days per the calendar year. A valid passport is a must.

Which Currency Is Used in Guayaquil?

In Guayaquil, the wet season is hot, oppressive, and overcast, and the dry season is warm, muggy, and partly cloudy. The best times to visit Guayaquil for ideal weather are June to December.

What Do I Need to Know about Airports in Guayaquil?

José Joaquín de Olmedo International Airport is the airport serving Guayaquil. It is the second busiest airport in Ecuador. The airport is located 5 kilometers north of Guayaquil’s center.

What Are Some Things to Do in Guayaquil?

There are plenty of things to do in Guayaquil. You can visit Cerro Santa Ana, art galleries in Las Peñas, Walk among mangroves on Santay Island, and so on.

Is the Water in Guayaquil Safe to Drink?

The tap water in Guayaquil, Ecuador, is not safe to drink. It’s better to boil it or buy bottled water.

Is Uber Safe in Guayaquil?

There are Uber taxis in this city. You can call it from the app on your smartphone. The cost will depend on the time of day and the duration of the trip.