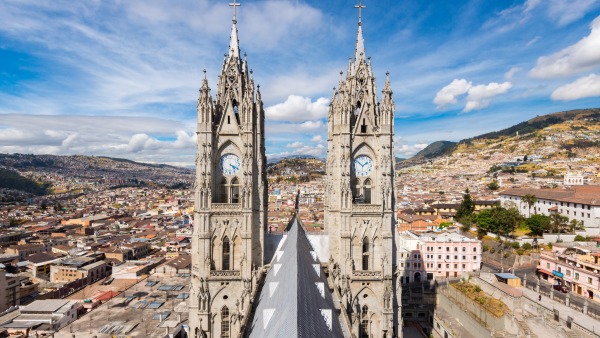 Quito is the capital of Ecuador, the country’s most populous city and at an elevation of 2,850 meters above sea level, it is the second-highest official capital city in the world and the closest to the equator.

In Quito, it is dangerous to travel alone and at night. The rest of the time, if you are in the company and move around during the day, you need to follow the usual precautions.

Public transport in Quito is not safe; taxis are better. Make sure to use only licensed taxi services. Taxi fraud happens quite often; it is important to use only trusted services.

Pickpocketing is a big problem in Quito. They operate in tourist places, in crowded places, at train stations, and in public transport. Be careful, watch your belongings and your surroundings.

Ecuador is prone to numerous natural disasters such as earthquakes, tsunamis, and volcanic eruptions. Quito is in an area that is also prone to these disasters. Make sure your trip is safe before your visit.

The risk of serious burglary and assault is high in Quito. It is especially dangerous if you are alone late at night. Avoid walking in remote areas of the city. Don't carry a lot of cash and expensive items with you.

In Quito, the risk is common with unlicensed taxis, which can often even steal a person for ransom. Keep track of your surroundings, choose only licensed transportation and taxi services. Always be attentive to your surroundings.

Women are not advised to travel to Quito alone; it may not be safe. Take care of the company and avoid late-night walks in the city.

How Safe Is Quito for Tourists?

Quito is not a safe city to travel to.

The main problems are related to robbery, car theft, violent crime, and corruption.

As with any big city, tourists should take extra care in certain areas.

It is better not to walk alone at night.

Do not climb El Panecillo on foot; use a taxi even during the day.

Sometimes the road is complete without a sidewalk, and this can be very dangerous for pedestrians.

At night, most of the Old Town’s main squares are patrolled by the police and are well lit so that you can walk here at night.

However, it is better not to walk alone, anyway.

Pickpocketing and wallet theft can be a problem, so take your usual precautions.

The Plaza and the San Francisco Church doors, and the main trolley station near Domingo Square are especially famous areas for this.

Better not to take your wallet with you at all – just a few bills split between different pockets.

Parks, among other areas, can be unsafe at night, so taxis are recommended.

Make sure you only use licensed taxi services and that the driver has turned on the taximeter.

Do I Need a Visa to Visit Quito?

When you first enter Ecuador, you will receive a T-3 tourist stamp in your passport, allowing you to stay in the country for 90 days.

Which Currency Is Used in Quito?

In Quito, the wet season is cool and overcast, and the dry season is comfortable and partly cloudy. The best time to visit Quito from June till September.

What Do I Need to Know about Airports in Quito?

What Are Some Things to Do in Quito?

Constructed on the foundations of an ancient Incan city, it’s known for its well-preserved colonial center, rich with 16th- and 17th-century churches and other structures blending European, Moorish and indigenous styles. These include the cathedral in the Plaza Grande square and ultra-ornate Compañia de Jesús Jesuit church.

Is the Water in Quito Safe to Drink?

The tap water in Quito, Ecuador, is safe to drink. Tap water supply is technically potable, although, with old pipes, its quality is somewhat questionable.

Is Uber Safe in Quito?

There is an Uber taxi in Quito. You can call a taxi from the app on your phone. The cost of the trip will depend on the distance and time of day.