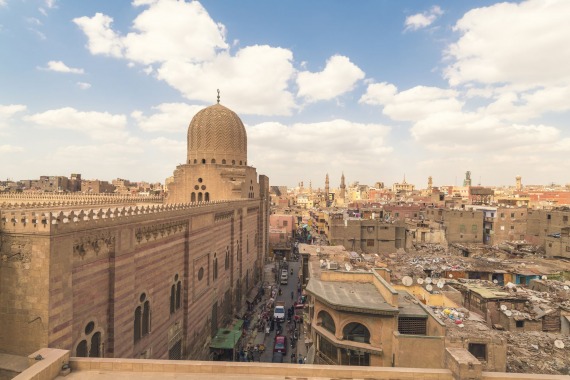 Egypt - safety as a country

Cairo is the capital of Egypt. With a population of over 20 million, its metropolitan area is the largest in Africa, in the Arab world, and the 6th-largest in the world. Cairo is associated with ancient Egypt, as the famous Giza pyramid complex and the ancient city of Memphis are located in its geographical area.

In general, Cairo is a fairly safe city to travel to. To avoid risks, you should only walk-in tourist places. Investigate the political background before your trip here.

It is dangerous to drive in Cairo, and traffic can be aggressive. If you are traveling by car, take a local driver. Public transport is also not safe; pickpocketing may occur. Taxi is a safe way to travel, negotiate the price of your trip in advance and choose only licensed taxis.

Cairo is a very touristy city, so there are a lot of pickpockets. Don't carry a lot of valuables and cash with you. Keep original documents in the hotel safe; always keep an eye on your belongings and bags.

Due to its location, various natural disasters can occur in Cairo, including sand and dust storms, floods, and landslides. Study the weather conditions before your trip here.

There is usually no risk of serious robbery and armed attacks in Cairo. Attacks on foreigners are sometimes possible, but this is rare and usually on the city's outskirts. Avoid walking in remote areas of the city.

Most often, fraud in Cairo is associated with an attempt to deceive tourists: in the price of a taxi ride, in the price of small souvenirs and goods. Be vigilant and double-check your money and change.

Unlike many other countries, travelers are not advised to travel to Cairo alone. Even though many of them enjoy their holidays without problems, there are reports of attacks against women. Women should dress modestly and not draw attention to themselves with their behavior.

How Safe Is Cairo for Tourists?

Cairo is considered a relatively safe city to travel to.

The main problems are associated with petty theft and high levels of corruption and bribery.

It is quite safe to walk the streets in Cairo at any time of the day.

However, you should be careful and watch your surroundings.

Women should dress more modestly so as not to attract the attention of residents.

You should keep in mind that there are plenty of “helpful” people around the more touristy places, but be careful who you go with and under no circumstances let anyone push or direct you where you don’t want to go!

Many speak a little English, and most know their area and tourist spots very well.

If you are careful and avoid non-touristy places, nothing serious will happen to you.

Do I Need a Visa to Visit Cairo?

Visitors to Egypt must obtain a visa from one of the Egyptian diplomatic missions unless they come from one of the visa-exempt countries or eligible for a visa on arrival. Visitors must hold passports that are valid for at least 6 months from the arrival date to Egypt.

Which Currency Is Used in Cairo?

The currency in Egypt is the pound (EGP), abbreviated E£. In Arabic, the pound is called a guineh. It is divided into 100 piastres, or ersh or 1,000 milliemes.

In Cairo, the summers are long, hot, humid, arid, and clear, and the winters are cool, dry, and mostly clear. The best time for visiting Cairo is from November to March when sporadic hot winds blow from the desert and cover Cairo’s whole in the dust.

What Do I Need to Know about Airports in Cairo?

What Are Some Things to Do in Cairo?

Cairo, Egypt’s sprawling capital, is set on the Nile River. At its heart is Tahrir Square and the vast Egyptian Museum, a trove of antiquities including royal mummies and gilded King Tutankhamun artifacts. Nearby, Giza is the iconic pyramids and Great Sphinx site, dating to the 26th century BC. In Gezira Island’s leafy Zamalek district, 187m Cairo Tower affords panoramic city views.

Is the Water in Cairo Safe to Drink?

Cairo’s drinking water is quite well treated, but waste-water treatment has many severe deficiencies. Tap water is not recommended to drink.

Is Uber Safe in Cairo?

There is an Uber taxi in Cairo. You can call a taxi from the app on your phone. The cost of the trip will depend on the distance and time of day.