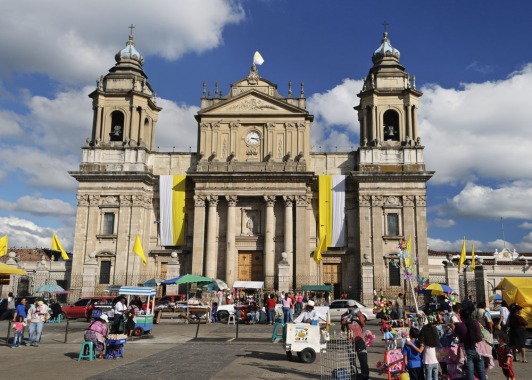 Guatemala - safety as a country

Guatemala City is not a very safe city. When traveling in this city, it is necessary to observe increased safety measures and do not walk late at night along the city streets.

Public transport is okay during the day, but avoid it at night. Buses are unsafe at night. Use a taxi to get around in the dark. Make sure to use only licensed taxi services.

Pickpockets are prevalent, especially with tourists. Keep track of your belongings, never leave your bag unattended. Don't shine with a lot of cash and expensive devices.

Guatemala City is prone to the risk of volcanic eruptions and earthquakes. Explore the natural conditions in the region before your visit here.

Guatemala is a very criminal city, and due to drug trafficking problems, violent crimes, and armed conflicts often occur here. Avoid walking late at night, and do not walk along poorly lit and remote streets. Don't carry a lot of valuable items with you. In the event of an attack, give the criminals what they ask for to save their lives.

The risk of terrorism in Guatemala is low. Of course, the risk of attacks still exists due to local gangs' showdown within the country.

Car rental fraud is common in the city. You may be offered a car that is broken and then told that it was you who broke the car and demand payment. Be careful and only rent a car in trusted locations.

Women traveling alone in Guatemala City are advised not to travel alone here. The city can be dangerous for single women, who are easy targets of violent crime and unwanted attention.

How Safe Is Guatemala City for Tourists?

Guatemala City is not a very safe city.

The main problems are related to theft, assault, robbery, drug trafficking, and corruption.

Guatemala City has a very bad reputation for overall safety for tourists.

Guatemala is considered one of the most dangerous cities in Latin America.

Here you have to be much more careful and take more precautions than usual.

In Guatemala City, except for a few very safe areas, most of the streets are empty at night.

Even the locals do not risk walking at night.

Pickpockets are present in Guatemala, as in any other city in the world.

Be careful on crowded city center streets and crowded buses during the day.

Always keep track of your belongings, don’t carry more money with you.

There are incidents on buses every night, from sexual harassment to armed robbery.

Therefore, traveling by public transport at night can be dangerous.

Driving in Guatemala City can be quite chaotic, especially during rush hour when the roads are crowded.

Drivers can be aggressive.

Public demonstrations against the government sometimes happen in Guatemala City.

They usually don’t get aggressive, but it’s best to just stay away from them and keep going.

Do I Need a Visa to Visit Guatemala City?

Visitors to Guatemala must obtain a visa from one of the Guatemalan diplomatic missions unless they come from visa-exempt countries. A valid passport is a must.

Which Currency Is Used in Guatemala City?

The quetzal is Guatemala’s currency, named after the national bird of Guatemala, the resplendent quetzal. In ancient Mayan culture, the quetzal bird’s tail feathers were used as currency. It is divided into 100 centavos or lenes in Guatemalan slang.

In Guatemala City, the wet season is overcast, the dry season is mostly clear, warm year-round. The rainy season in Guatemala starts in June and usually lasts up to November.

What Do I Need to Know about Airports in Guatemala City?

Guatemala’s largest and busiest airport is La Aurora International Airport, in Zona 13 of Guatemala City. It is a modern airport with lots of facilities. An alternative airport when coming to Guatemala is situated in Flores, Petén.

What Are Some Things to Do in Guatemala City?

Is the Water in Guatemala City Safe to Drink?

Tap water is not drinkable in Guatemala City. You should buy bottled water or boil tap water.

Is Uber Safe in Guatemala City?

There is an Uber taxi in Guatemala City. You can call a taxi from the app on your phone. The cost of the trip will depend on the distance and time of day.