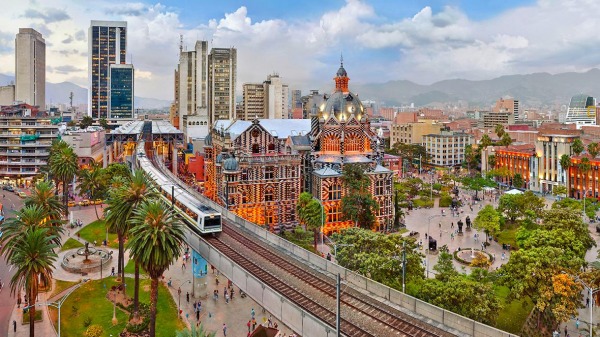 Colombia - safety as a country

Medellín is the second-largest city in Colombia, after Bogotá, and the capital of the department of Antioquia. It is located in the Aburrá Valley, a central region of the Andes Mountains in South America. According to the National Administrative Department of Statistics, the city had an estimated population of 2,508,452 according to the 2018 census. With its surrounding area that includes nine other cities, the metropolitan area of Medellín is the second-largest urban agglomeration in Colombia in terms of population and economy, with more than 3.7 million people.

In general, Medellin is safe for travelers if they are in the city's central parts and tourist spots. It is better not to go to the outskirts and suburbs of the city. Avoid walking alone and late at night.

Public transport is not particularly reliable, watch out for your pockets and things on the buses. Taxi is a convenient way of getting around, but only licensed taxi services should be used. Make sure the driver turns on the taximeter or negotiate the price of the ride in advance.

The risk of pickpocketing is very high in this city. Be especially attentive at any time of the day or night. Don't carry a lot of cash or expensive items with you. Avoid dark streets and remote areas of the city.

There is a small risk of flooding and earthquakes. Investigate the natural situation and weather conditions before your visit to Medellin.

Serious armed attacks occur in the city from time to time. Tourists are usually not the target of attackers. All serious showdowns usually take place between members of different gangs. Avoid going out late at night, getting involved in drunken fights, or drawing attention to yourself with cash or expensive devices.

The risk of terrorism is also high in Medellin due to the frequent showdown of gangster groups. Study the political situation in the city before your trip here.

One of the most common types of fraud is when a girl meets a tourist in a club and adds opiate to his drink. A robbery usually follows this. Be extremely careful with where you withdraw money - it is better to withdraw only in ATMs at banks.

Women traveling alone may not feel entirely safe in Medellin. Keep an eye on your surroundings, do not walk around the city late at night, use taxi services instead of public transport to get to your hotel.

How Safe Is Medellin for Tourists?

The crime rate in Medellin ranges from low to high.

The main problems are associated with high levels of corruption, drug trafficking, and robberies.

Medellin is generally a safe city for tourism, depending on which part of the city you visit and the hours, and is much safer than in previous years.
Most crime occurs in the city’s hillside slums and among prominent drug dealers, although the city’s wealthier neighborhoods are also affected by crime.

The poor areas in the northeast and northwest of the city should be avoided both day and night to avoid trouble.

Most of the city center (or center) is best avoided at night.

Most travelers to Medellin will tell you that they have never been in danger as the city center and tourist areas and attractions are heavily guarded.

It is better not to travel alone at night – the risk of being robbed increases.

If necessary, travel with a few friends and call a taxi at night instead of taking it off the curb.

Don’t take drinks from strangers and don’t get involved with drugs.

In this country, they are widespread, but they are illegal, and any interaction with them can result in serious punishment.

Do I Need a Visa to Visit Medellin?

Visitors to Colombia must obtain a visa from one of the Colombian diplomatic missions unless they come from visa-exempt countries. A valid passport is a must.

Which Currency Is Used in Medellin?

The Colombian peso is the currency of Colombia. The official peso symbol is $, with COL$ also being used to distinguish it from other pesos- and dollar-denominated currencies.

The climate in Medellín is warm and overcast. In Medellín, the summers are short, hot, dry, and mostly clear and the winters are cold and partly cloudy

What Do I Need to Know about Airports in Medellin?

What Are Some Things to Do in Medellin?

Medellín is the capital of Colombia’s mountainous Antioquia province. Nicknamed the “City of Eternal Spring” for its temperate weather hosts a famous annual Flower Festival. Modern metro cables link the city to surrounding barrios and offer views of the Aburrá Valley below. Sculptures by Fernando Botero decorate downtown’s Botero Plaza, while the Museo de Antioquia displays more of the Colombian artist’s work.

Is the Water in Medellin Safe to Drink?

Medellin’s tap water is perfectly safe to drink; there is no need to buy bottled water or worry about the ice in your drink. The water might taste a little chlorinated, but it’s convenient to know that you always have a free and safe water option anywhere in the city.

Is Uber Safe in Medellin?

There is an Uber taxi in Medellin. You can call a taxi from the app on your phone. The cost of the trip will depend on the distance and time of day.