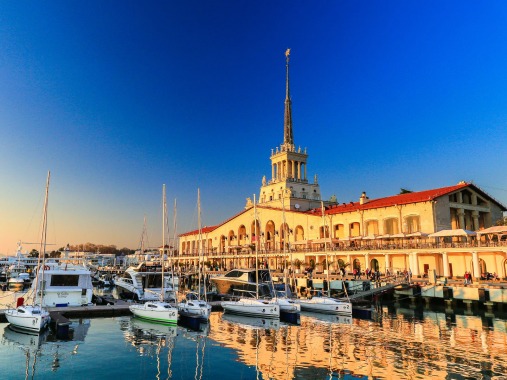 Sochi is the largest resort city in Russia. The city is situated on the Sochi River, along the Black Sea in Southern Russia, with 443,562 residents. Sochi is unique among larger Russian cities as having some aspects of a subtropical resort.

Sochi is a safe city, and there are practically no risks for travelers. Observe the usual precautions and behave with discretion, just like in your city.

Public transport in Sochi is generally safe, but always keep an eye on your belongings and pockets. The taxi is safe and reliable. Use only licensed taxi services.

Pickpocketing often occurs in the beach area and tourist spots, as well as in bazaars. Always keep an eye on your wallet and don't carry a lot of cash with you.

Sochi is at risk of earthquakes and floods, but these are not big risks. Study the natural conditions before your trip here.

Serious robberies and armed attacks are rare in Sochi, usually in the suburbs and poorly lit, deprived areas. Avoid such places and do not walk there at night.

In Sochi, there is a threat of international terrorism due to the proximity to the conflict zones, but this risk is not very high. Study the political situation in the region before your trip here.

Fraud in the city is associated with lotteries and fake winnings, often in the beach area. Do not participate in such games, and you will stay safe.

With the usual precautions, women traveling alone will feel safe in Sochi.

How Safe Is Sochi for Tourists?

Sochi is quite a safe city for traveling.

Sochi does not have a high crime rate, but standard precautions should be followed.

As in any resort town, try to avoid dark places at night and watch out for pickpockets in crowded places such as markets, train stations, and beaches.

Fraud is widespread at Russian summer resorts, but most of the organizers do not speak English well.

In any case, try to avoid drinking and gambling with strangers.

It’s hot enough in summer, so make sure you have sunscreen and plenty of drinking water.

Avoid walking in areas remote from the city center and do not hang out with drunk people.

Be careful in bars – locals can drink a lot and not get drunk, do not compete with them.

Stay vigilant on the beach, do not leave your belongings unattended when you go swimming.

Don’t carry a lot of cash and expensive things with you – it is better to leave them in the hotel safe.

Use a taxi to get around late at night.

Watch your pockets and do not trust those who ask for help or offer it.

These are often scammers.

Don’t take part in street lotteries and don’t take anything from strangers even if they say it’s free.

Do I Need a Visa to Visit Sochi?

Which Currency Is Used in Sochi?

In Sochi, the summers are warm, muggy, and mostly clear, and the winters are long, old, wet, and partly cloudy. The best time to visit Sochi in Russia is from June until September.

What Do I Need to Know about Airports in Sochi?

What Are Some Things to Do in Sochi?

Sochi, a Russian city on the Black Sea, is known as a summer beach resort and was the host of the 2014 Winter Olympics. Its parks include the palm-filled Arboretum. It’s also notable for 20th-century neoclassical buildings such as the columned Winter Theatre. Forested Sochi National Park is a 1,937-sq.-km protected area in the nearby Caucasus Mountains. Some 70 km inland, Krasnaya Polyana is a prominent ski resort.

Is the Water in Sochi Safe to Drink?

The tap water in the city is not potable.

Is Uber Safe in Sochi?