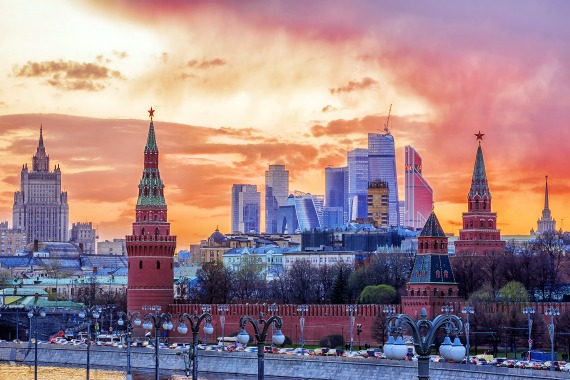 Moscow is the capital and largest city of Russia. The city stands on the Moskva River in Central Russia, with a population estimated at 11.9 million residents within the city limits. Moscow is among the world’s largest cities, being the largest city entirely in Europe, the largest urban area in Europe. As the historic core of Russia, Moscow serves as the home of numerous Russian artists, scientists, and sports figures due to its various museums, academic and political institutions, and theatres.

Moscow is a fairly safe city for traveling, but since it is a large metropolis, you need to keep track of your belongings, beware of pickpockets and not get involved with drug dealers.

Public transport is well developed and safe. The metro can get crowded during rush hour. Watch out for your pockets in this case. Taxi is a convenient and safe way to get around the city. Use a taxi to return to your hotel if it's already late at night.

As in any big city, there are many cases of pickpocketing in Moscow. Pickpockets hunt those who do not take good care of their belongings. Never leave your belongings and phone unattended.

The Moscow region is practically not subject to any risk of natural disasters. Study the weather conditions before your visit and prepare appropriate clothing.

Serious robberies and armed attacks are rare in Moscow, usually in the suburbs and poorly lit, deprived areas. Avoid such places and do not walk there at night.

Due to its international position, there is a high risk of terrorist attacks in Moscow. Avoid large crowds and do not participate in rallies and social events.

Fraud in Moscow is most often associated with extortion. Beggars and children can distract your attention to rob you unnoticed. Beware of them. Also, double-check restaurant and cafe bills.

Women traveling alone can feel quite safe in Moscow. The main thing is to adhere to the usual precautions and monitor your surroundings.

How Safe Is Moscow for Tourists?

Moscow is a fairly safe city.

The main problems here are associated with petty theft and corruption.

In recent years, the police’s presence has increased, and many surveillance cameras have contributed to a decrease in the city’s crime rate.

Moscow is a big metropolis, so common sense should be used.

Watch out for pickpockets on the subways, train stations, airports, landmarks, and other crowded places.

Traveling in the city can be challenging during the winter – the winter months in this region are quite harsh.

Use pedestrian crossings to cross the street as traffic can often be quite crazy.

They are quite common, especially near airports, train stations, tourist attractions, bars, and clubs.

Do not get into the car if you have not agreed on a price in advance.

Do I Need a Visa to Visit Moscow?

Which Currency Is Used in Moscow?

In Moscow, the summers are comfortable and partly cloudy, and the winters are long, freezing, snowy, windy, and overcast. The best time to visit Moscow is March and April. The autumn months of September and October is also a good time to visit the city.

What Do I Need to Know about Airports in Moscow?

What Are Some Things to Do in Moscow?

The city is home to several UNESCO World Heritage Sites and is well known for its display of Russian architecture, particularly its historic Red Square, and buildings such as the Saint Basil’s Cathedral and the Moscow Kremlin, of which the latter serves as the seat of power of the Government of Russia. Moscow is home to many Russian companies in numerous industries. It is served by a comprehensive transit network, including four international airports, nine railway terminals, a tram system, a monorail system, and most notably the Moscow Metro, the busiest metro system in Europe and one of the largest rapid transit systems in the world.

Is the Water in Moscow Safe to Drink?

The tap water is of good quality, but it contains a lot of chlorine, and it is not recommended to drink it.

Is Uber Safe in Moscow?