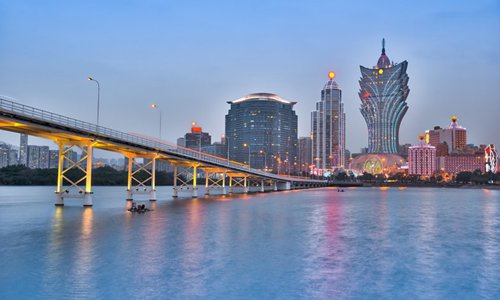 Macau is a city and special administrative region of the People’s Republic of China in the western Pearl River Delta by the South China Sea. With a population of about 650,00 and an area of 32.9 km2, it is the most densely populated region in the world.

Macau is generally a safe city to visit. You should beware of only petty fraud and watch your belongings. It is better not to leave personal belongings unattended.

There is a shortage of taxis in the city, so non-licensed services often work. You should not use such a taxi, and it can be dangerous. Public transport is relatively safe. Keep track of your belongings and your surroundings.

The risk of pickpocketing is very high as the city is full of tourists, which attracts pickpockets. Keep your valuables in the hotel safe, carry only copies of important documents with you. Don't shine with expensive devices and cash.

The Macau region is at risk of typhoons that periodically occur here. Study the weather conditions in the city before your visit.

The risk of serious robbery and armed attack in Macau is shallow. Avoid communicating with suspicious individuals and not walking late at night in remote areas from the city center.

Fraud is the most common crime in Macau. Tourists should beware of unlicensed services and services, do not catch a taxi on the street, and double-check all payments.

Women traveling alone can feel quite safe in Macau. The main thing is to adhere to the usual precautions and monitor your surroundings.

How Safe Is Macau for Tourists?

Macau is not considered a safe enough region to travel to.

The standard of living of local people in Macau is generally good (one of the best in Asia).

As a tourism-oriented city, the Macau government aims to “clean up” the city and its image.

For example, the police in Macau are more efficient than ever.

When traveling to Macau, beware of pickpockets, especially in crowded places such as tourist attractions and border stations. Store valuables in a safe place.

Pickpockets usually gather in groups and use one person to distract people while others work.

Fraud aimed at tourists is common.

People who are usually well dressed claim to have lost their wallet and not eat all day, asking for $ 20-30 for food.

The police warned in local media that they should not be given money.

Macau has a big problem with a shortage of taxis, and in addition to long lines for taxis, taxi drivers often illegally charge inflated prices without turning on the meter or refuse passengers to transport to unwanted destinations.

This practice is known in Macau as “fishing”.

Do I Need a Visa to Visit Macau?

The Government of the Macau Special Administrative Region allows citizens of specific countries/territories to travel to Macau for tourism or business purposes for periods ranging from 14 to 180 days without obtaining a visa.  For other entry purposes, such as establishing residence on a long term basis, a different policy applies.

Which Currency Is Used in Macau?

The Macau pataca or Macanese pataca is the currency of Macau. It is subdivided into 100 avos, with 10 avos called ho in Cantonese. The abbreviation MOP$ is commonly used.

Macau’s climate is subtropical, with very mild winters and hot, rainy, and muggy summers. July and August are the hottest months of the year.

What Do I Need to Know about Airports in Macau?

Macau’s major airport is Macau International Airport, which serves many international flights and is one of China’s busiest. It is located on Taipa island and can handle about 6 million passengers per year.

What Are Some Things to Do in Macau?

Macau is an autonomous region on the south coast of China, across the Pearl River Delta from Hong Kong. A Portuguese territory until 1999, it reflects a mix of cultural influences. Its giant casinos and malls on the Cotai Strip, which joins the islands of Taipa and Coloane, have earned it the nickname, “Las Vegas of Asia.” One of its more striking landmarks is the tall Macau Tower, with sweeping city views.

Is the Water in Macau Safe to Drink?

Tap water in Macau is safe to drink. Bottled water is inexpensive and available in convenience stores and supermarkets.

Is Uber Safe in Macau?

There is an Uber taxi in Macau. You can call a taxi from the app on your phone. The cost of the trip will depend on the distance and time of day.