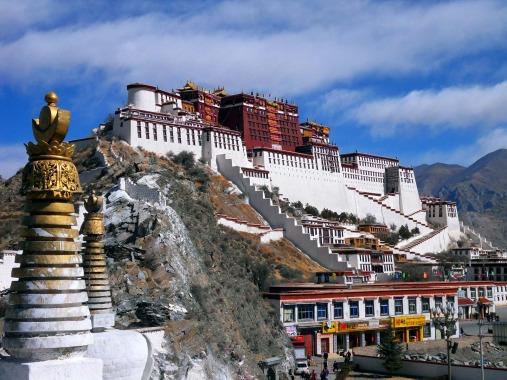 Tibet is an autonomous region within China, located in the Tibetan Plateau north of the Himalayas. Since this region is very high above sea level, its metaphorical name is the world’s roof. Mount Everest is located on the border between Tibet and Nepal.

Tibet is very safe to travel to. You don't have to worry about your safety here. Use common sense and keep track of your belongings. Although even if you left a bag on the bench, it likely will most remain safe or be returned to you.

Public transport is safe, but not always convenient. Taxis are reliable, and you can always hire a driver and car for your entire day trip. Buses and jeeps can also be found for traveling with fellow travelers, which reduces the cost of the trip.

Pickpockets in Tibet are practically absent. You can safely visit the sights and not be afraid of being robbed. Use common sense anyway.

Disasters caused by drought are one of the main types of accidents in the Tibet region. The region is also prone to seismic hazards and glaciers. Melting glaciers cause snow avalanches that can cover entire villages. Explore the area news before your visit.

Armed robberies and kidnappings do not happen in Tibet. This region is usually free from such serious crimes. In any case, stay out of trouble and respect the local culture and customs.

In fact, terrorism in Tibet is unlikely. However, due to China's political differences and the Territories of Tibet, conflicts and terrorist attacks are likely. Before you travel to Tibet, study the political environment.

Fraud is not common in Tibet. The most that you can get here is a petty deception with change while shopping and inflated prices for tourists.

Women traveling alone in Tibet can feel completely safe. Use common sense, dress modestly, do not draw undue attention to yourself, and your journey will be completely safe.

How Safe Is Tibet for Tourists?

We can say that Tibet is one of the safest places on Earth.

Thanks to its history and religion, this region is conflict-free and free of petty crime.

In Tibet, it is customary to give alms, especially when visiting temples and monasteries.

The size of the charity is up to you.

Consider the region’s religious and cultural background when traveling.

Your dress and behavior should be discreet and modest.

In Tibet, it’s customary to bargain.

Here it is a standard seller-buyer interaction line and, at the same time, a real performance.

Tibet is located in the highlands, so you should prepare your body for high stress and altitude sickness in advance.

Be careful in crowded places – petty thieves can also be found here.

It is not customary to give money to children – it is traditionally believed that this leads them astray.

You can treat them to sweets or give them a toy.

The left hand in Tibet is traditionally considered “impure”.

Do not say hello or take food with your left hand.

Do not touch her Buddhist shrines, do not transfer money, and, most importantly, do not turn the prayer drums – this will be perceived as an insult.

Keep your valuables and money in safe places.

Do I Need a Visa to Visit Tibet?

To visit Tibet, all tourists must obtain permission to visit this area (permits). Permits in Tibet come in two forms: Permit to enter Tibet – Tibet Entry Permit and Permit entering certain closed areas of Tibet – PSB Permit. According to China’s current legislation, receiving permits for foreign citizens is possible only when buying a travel package from licensed travel agencies in Lhasa. Getting licenses to Tibet without purchasing a tour is impossible. A valid passport is a must.

Which Currency Is Used in Tibet?

Rénmínbì or yuán is the official currency in Tibet. The distinction between renminbi and yuan is that the renminbi is the currency’s name, and yuan refers to its primary unit. One yuan is subdivided into 10 jiao.

Tibet has a dry, cold climate with an average annual temperature ranging from -12° to 9°, depending on the region. The best time to travel to Tibet is in April and May or September and October.

What Do I Need to Know about Airports in Tibet?

The travel insurance policy is a must when visiting a foreign country or city. Make sure you got it before starting your journey. The customs officer may ask for it.

What Are Some Things to Do in Tibet?

Mount Everest is located on the border between Tibet and Nepal. Tourists often come to climb it. On a hill above the city of Lhasa is the Potala Palace, which was once the winter residence of the Dalai Lama. There is also the heart of Tibet – the Jokhang temple, in which there is a golden statue of a young Buddha.

Is the Water in Tibet Safe to Drink?

Is Uber Safe in Tibet?