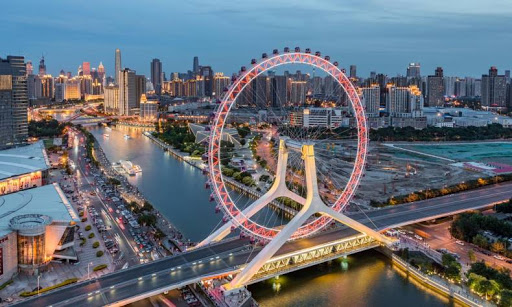 Tianjin, alternately romanized as Tientsin, is a municipality and a coastal metropolis in Northern China on the Bohai Sea shore. It is one of the nine national central cities in Mainland China, with a total population estimated at 15,621,200 in 2016. Its built-up (or metro) area, made up of 12 central districts (all but Baodi, Jizhou, Jinghai, and Ninghe), was home to 12,491,300 inhabitants in 2016 and is also the world’s 29th-largest agglomeration (between Chengdu and Rio de Janeiro) and 11th-most populous city proper.

Tianjin is safe for both tourists and locals. The crime index is not high here, and the main problems are associated with petty fraud. Be careful and use common sense.

Public transport is safe, but you should watch out for your pockets. Use only licensed taxi services, as an unlicensed taxi can cheat with the fare.

Pickpocketing happens quite often on public transport and in crowded places. Be careful, always watch your belongings, and do not leave them unattended. It is better to leave valuables and documents in the hotel safe.

The region is not subject to any serious natural disasters.

Serious robberies and armed attacks rarely happen in Tianjin. This is very rare, and tourists rarely find themselves victims of such accidents.

The most common scam in this city is a counterfeit money scam. You can be given them for change in shops and cafes. Also, in unlicensed taxis. Be careful, double-check everything, and use non-cash payments where possible.

Women traveling alone can feel quite safe in Tianjin. The main thing is to adhere to the usual precautions and monitor your surroundings.

How Safe Is Tianjin for Tourists?

Tianjin is a fairly safe city to travel to.

The main problems here are associated with petty theft and petty fraud.

Behave in this city the same way you would behave in your hometown.

Keep your common sense; don’t draw too much attention to yourself, don’t get drunk in bars.

Don’t be too provocative on the streets – the Chinese really don’t appreciate this behavior.

There are several pedestrian bridges but few tunnel crossings.

Many people cross the road at a traffic light or pedestrian crossing.

But in general, especially since the roads are wide and new due to recent construction, crossing the road must be done carefully.

If you are traveling by taxi, make sure the taxi driver turns on the taximeter.

Or negotiate the price of the trip in advance to avoid trickery with the fare.

Always keep an eye on your belongings and your surroundings in Tianjin.

Pay attention if a suspicious person is following you and avoid loneliness, especially at night.

Otherwise, you are unlikely to have any problems in this city.

Do I Need a Visa to Visit Tianjin?

Which Currency Is Used in Tianjin?

In Tianjin, the summers are long, warm, muggy, and partly cloudy, and the winters are freezing, dry, and mostly clear. The period from February to September is the rainy season, so the best time to visit Tianjin is spring and autumn, when the climate is the most stable.

What Do I Need to Know about Airports in Tianjin?

What Are Some Things to Do in Tianjin?

Tianjin is a major port city in northeastern China. Following the 1858 Treaties of Tianjin, several Western nations established concessions in Tianjin. The European-style houses, municipal buildings, and churches in Wudadao (Five Great Avenues) are legacies. In contrast, standing is the city’s many modern skyscrapers, including the iconic 415m-tall Tianjin Radio and Television Tower.

Is the Water in Tianjin Safe to Drink?

In general, the water in Tianjin is not safe to drink. You should buy bottled water or boil tap water.

Is Uber Safe in Tianjin?

There is no Uber taxi in Tianjin. You can use any other local taxi services.