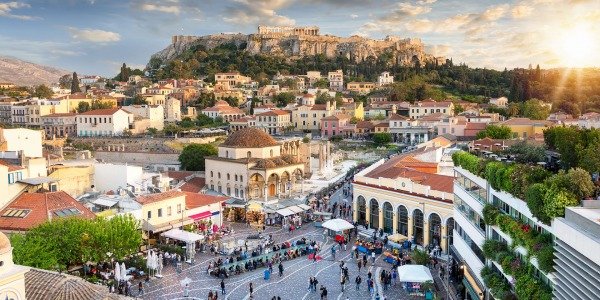 Athens is the capital and largest city of Greece. Athens dominates the Attica region and is one of the world’s oldest cities, with its recorded history spanning over 3,400 years. Its earliest human presence started somewhere between the 11th and 7th millennium BC.

Athens is a very safe city to travel to. However, it is worth taking the usual precautions, not buying anything from street vendors or walking around town late at night.

Public transport is safe and accessible. However, pickpocketing can happen in it. Use only licensed taxi services.

Pickpocketing is a frequent occurrence on the streets of Athens. Always keep valuables with you and do not leave your bags unattended even for a minute. Keep track of your belongings, do not leave your phone unattended, keep important documents in the hotel's safe.

The city is not subject to any serious risks of natural disasters. It can be sweltering in summer, so carry drinking water and avoid direct sunlight.

In Athens, there may be strikes and minor terrorist attacks associated with the antics of anarchists. Study the political situation in the city before your trip here.

There are many fraudsters in the city; most often, fraud is associated with selling fake things and services to tourists. Do not buy anything on the streets from street vendors.

Women traveling alone can feel quite safe in Athens. The main thing is to adhere to the usual precautions and monitor your surroundings.

How Safe Is Athens for Tourists?

Athens is a relatively safe city to travel to.

The main problems are related to theft, vandalism, assault, and high levels of corruption.

Pickpockets can be found in the Plaka area and on public transport.

Be extremely careful and keep all your documents, cards, and money in different places.

Street crime is rare; when this happens, most often, it is the theft of wallets from women who leave banks and ATMs.

Sometimes groups of street boys loiter at the ticket machines at metro stations near the Acropolis and may try to cancel your transaction and snatch the returned coins, pretending to help you.

Be aware and be prepared to reflect on them.

You may also be contacted by street vendors offering cell phones or other electronic devices at meager prices.

You should not buy any of them: most likely, they are either convincing fakes or stolen.

Vandalism and attacks on police stations can occur in Athens at night.

These are handled by youth groups and anarchists.

A tourist shouldn’t walk around the city alone after sunset.

Use a taxi to return home.

Do I Need a Visa to Visit Athens?

Which Currency Is Used in Athens?

In Athens, the summers are hot, dry, and clear, and the winters are long, cold, windy, and partly cloudy. The best time to visit Athens is from May to September.

What Do I Need to Know about Airports in Athens?

The new Athens Eleftherios Venizelos International Airport is 27 km away from the city center, and since it was opened in 2001, it is one of the most attractive European airports.

What Are Some Things to Do in Athens?

The city is still dominated by 5th-century BC landmarks, including the Acropolis, a hilltop citadel topped with ancient buildings like the colonnaded Parthenon temple. Along with the National Archaeological Museum, the Acropolis Museum preserves sculptures, vases, jewelry, and more from Ancient Greece.

Is the Water in Athens Safe to Drink?

Is Uber Safe in Athens?

There is an Uber taxi in Athens. You can call a taxi from the app on your phone. The cost of the trip will depend on the distance and time of day.