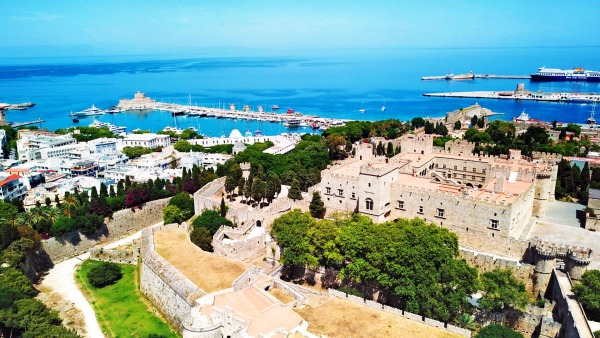 Rhodes is the largest of Greece’s Dodecanese islands and is also the island group’s historical capital. Administratively the island forms a separate municipality within the Rhodes regional unit, which is part of the South Aegean administrative region. The principal town of the island and seat of the municipality is Rhodes.

The island is safe for travel, and tourists are completely safe here almost at any time of the day. However, common sense is still worth having.

Popular transport in Rhodes is mopeds. Be sure to use a helmet if you travel with it. Use only licensed taxi services, as unlicensed ones can be unsafe and can inflate the fare.

As elsewhere in tourist destinations, Rhodes is no exception for pickpockets. Although theft is rare here, always keep an eye on your belongings, especially on the beach, cafes, and bazaars.

Rhodes is at little risk of earthquakes. Therefore, before your visit, study the natural setting to avoid risks.

The risk of serious robbery and armed attacks is shallow in Rhodes. Avoid communicating with suspicious individuals and not walking late at night in remote areas from the city center.

There is no fraud as such on the island. However, rare cases of deceiving tourists are not excluded. This is usually associated with the operation of unlicensed taxis and the sale of fake items. Use only licensed services and services.

Women traveling alone can feel quite safe in Rhodes. The main thing is to adhere to the usual precautions and monitor your surroundings.

How Safe Is Rhodes for Tourists?

Rhodes is a very safe place to travel.

The crime index here is at a low level, and the main problems are associated with petty theft and vandalism.

In the Faliraki area, there are especially many police and drunk tourists who are closely monitored there.

Due to past stories of vandalism from drunken tourists, you will be watched closely by the police if they notice that you are too drunk.

In general, the island is famous for clubs and entertainment for young people, so families with children should avoid walking late at night when there is much drunken youth on the island’s streets.

If you travel by taxi – find out the fare in advance or agree on the fare.

Sometimes taxi drivers turn off the taximeter and set an arbitrary fare, which can be inflated several times.

Keep valuables and cash in the hotel safe. Pickpocketing is not so common here, but there may always be someone who wants to steal your bag or wallet.

Withdraw money only from ATMs with banks with cameras.

Women can feel safe in Rhodes, but they should always practice common sense and avoid dangerous areas at night.

Do I Need a Visa to Visit Rhodes?

Which Currency Is Used in Rhodes?

The climate on Rhodes is the Mediterranean, with mild, rainy winters and hot, sunny summers. July is the hottest month in Rhodes with an average temperature of 26°C, and the coldest is January at 12°C.

What Do I Need to Know about Airports in Rhodes?

What Are Some Things to Do in Rhodes?

Rhodes, the largest of Greece’s Dodecanese islands, is known for its beach resorts, ancient ruins, and remnants of its occupation by the Knights of St. John during the Crusades. The city of Rhodes has an Old Town featuring the medieval Street of the Knights and the castlelike Palace of the Grand Masters. Captured by the Ottomans and then held by the Italians, the palace is now a history museum.

Is the Water in Rhodes Safe to Drink?

Tap water is not drinkable. Water is brought by water tanks rather than an on-island water system, so water from taps is only for showering and cleaning.

Is Uber Safe in Rhodes?

There is no Uber taxi on Rhodes. You can use any other local taxi services.